Get Draped In The Silkiest Silk That Ever Silked

I mentioned wanting to use this pattern for a top, and did exactly that! In the exact fabric I intended to use for it! It was supposed to be a really simple project, but of course I used a silk chiffon-like fabric I got from the Fabric Sales ages ago (when their webshop was online) and made things way harder for myself.

I used the pattern pieces for the dress bodice, lengthened a bit and obviously ungathered. Since the silk is too transparent to be worn as a single layer (even with pretty underwear) I decided to make it two layers and cut one slightly shorter than the other for a nice... layered effect. The straps are a piece of silver cord that I bought, they make for a nice accent and are a bit sturdier than self-fabric straps in this case. 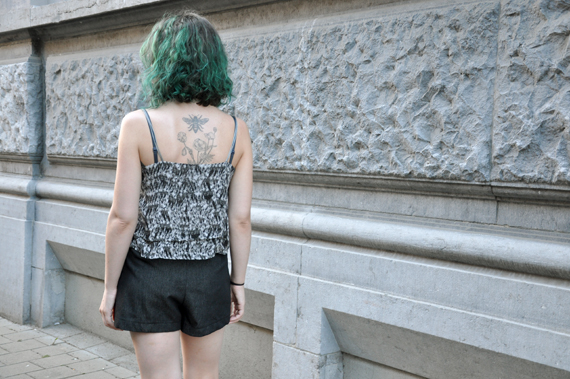 Cutting this was relatively easy: the silk is very lightweight but it's not slippery, so once things were in position there was minimal shifting. I just had to make sure it didn't suddenly float off-grain in a breeze. I also cut this on the kitchen table instead of the floor because cat claws! Apart from lengthening the pattern pieces and omitting the center back seam, no modifications were made.

Sewing this wasn't hard as well, I used a very fine needle and made sure the fabric wasn't being pushed down into the feed dogs before I started stitching. My brain farts did lead to some unpicking: I used french seams on the entire thing and sewed a few bits with the wrong (or in this case, right) sides together. And then I messed up sewing the two layers together, so the bottom layer had the wrong side of the fabric on show. Unpicking silk chiffon is BAD for stress levels, I can tell you that now! 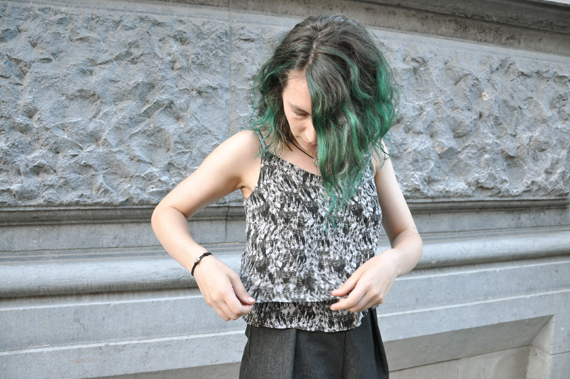 Hemming proved to be interesting as well. I was going to do a very narrow hem by basting a line of stitches, folding and pressing along the basting, stitching, folding and pressing again and stitching again but my machine was just not having it. Even with tension at its lowest the basting stitches just made the whole thing gather ever so slightly (which was not a problem with the side seams at all). In the end I cut the stitching at regular intervals to release the tension, used it as a guideline for pressing and finished the hem by hand. 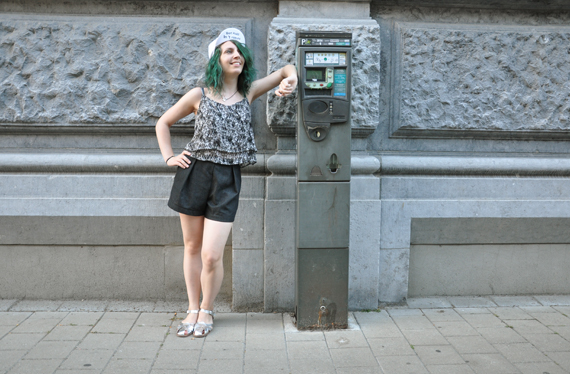 My friend Karen and I took these pictures before going out for ice cream, and I think she should do more art direction. Here she had me model a hat that says 'Bart Kaëll in 't nieuw' and if you don't know what that's about I strongly recommend you click this link. We are currently contemplating our own custom hats.
Gepost door Anneke op 13:48