Boy, this blog is suddenly getting updated a lot! It might be the weather and the longer days, but I seem to have more opportunities to get out and take pictures. Earlier this week Hanne and me went out to take some pictures for her Etsy shop, and we took the opportunity to photograph my spankin' new silver jean shorts! (yeah, you heard that right)


These are the Morgan jeans (AGAIN), obviously shortened a bit. I widened the leg by a few cm to make it a bit looser around the thighs and avoid that sort of reverse muffin top effect super tight shorts give (shudder). Getting this cut out was a puzzle since I only had one meter of this silver-coated denim and had already used a sizeable piece for a tote bag! 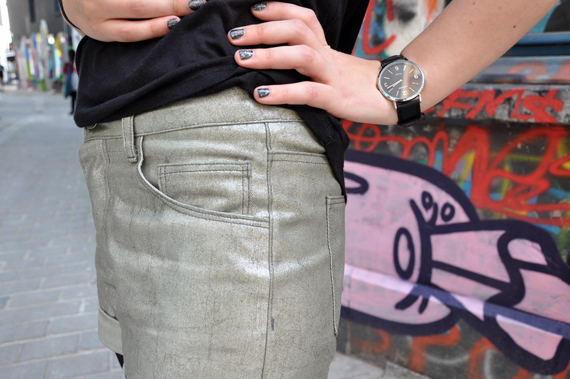 I just sewed these up as instructed, since I didn't make any changes apart from chopping most of the length off. My full length pair stretches out quite a lot after wearing it (even for a few hours) but these seem to have more recovery... Maybe it's the silver coating that prevents this non-stretch denim from getting stretched out in the first place? 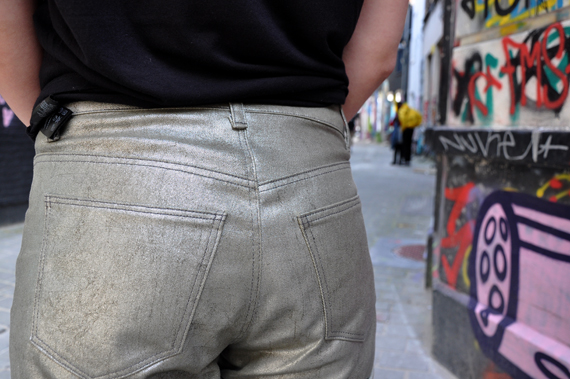 That same silver coating posed some problems when it came to pressing. I could not apply the iron directly, even with lots of steam, without the silver coming off the fabric and onto the iron. Pressing cloth it was! I topstitched everything with a triple straight stitch and grey thread, and it looks pretty good (apart from that mismatched yoke seam...) 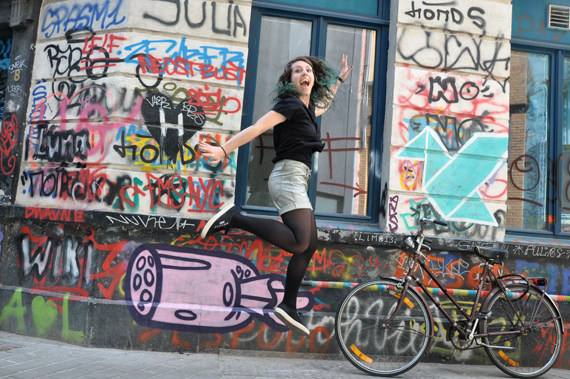 I made Hanne do jumping pictures so she wanted to get even. I've already worn these shorts three times since making them a week ago, which makes them a definite winner in my book! There was some debate about the hem finish, with some people preferring it cuffed and some people liking the hem just turned and stitched. I left the thing long enough to roll up into a cuff without making it look obscene, and thought I could always shorten the hem a bit more if I tire of cuffed shorts!

Hanne was sort of happy to see that I find taking pictures just as awkward as she did. It might sound weird coming from someone who takes loads of pictures of herself for this blog, but I really don't like having my picture taken. You guys tend to get a selection of what I consider to be 'acceptable' ones, but I have to admit that most of the pictures I take look like this: 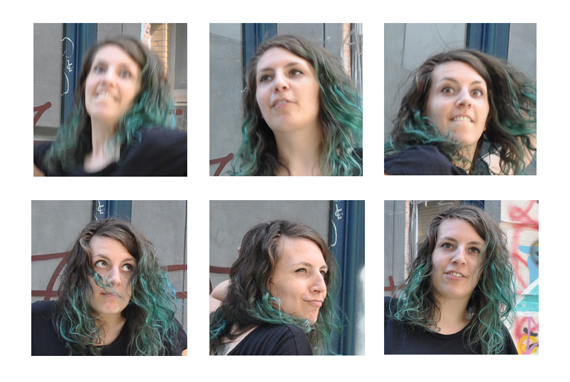 Maybe I should do a blog post with only these kind of shots!

This moment of blogging productivity has come to an end though. I'm leaving for a few days in Leipzig and Berlin on Saturday, and don't have anything to photograph! I am planning to try and draw some things, so if I manage to make a few nice sketches I might show you some.

Until then I will say goodbye with the song that inspired this post title (and maybe even these shorts). I tried counting the Justin Timberlakes in this a few times but always had to give up...

I Am a Trash Bag From Outer Space

Or at least, that's how these glittery dungarees make me feel. And it's not necessarily a bad thing. 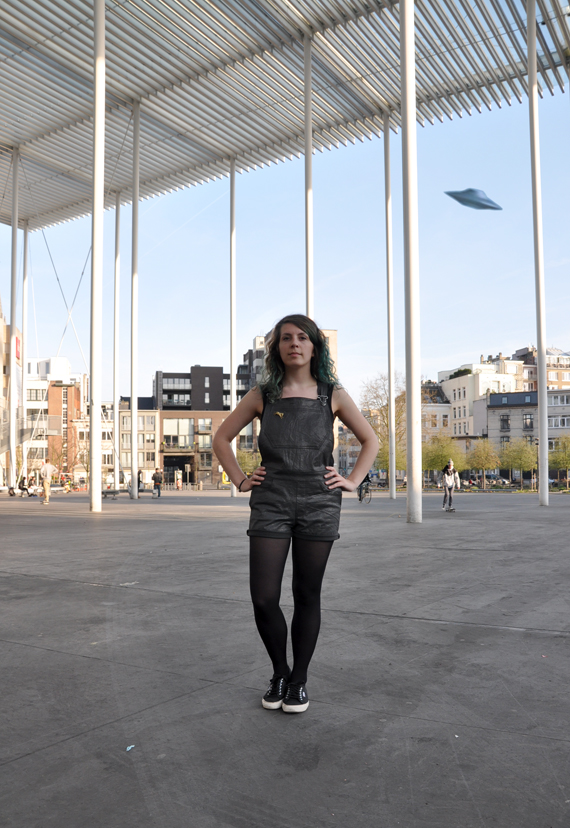 I bought this fabric at Pauli during a very spontaneous (and maybe slightly stressful) shopping trip with Hanne to get a birthday present (aka gift certificate) for Joost. We had ten minutes to find out if they had gift certificates and to get one, but in those ten minutes I managed to spot a bolt of stretch glitter jeans, pet it and take some home with me. 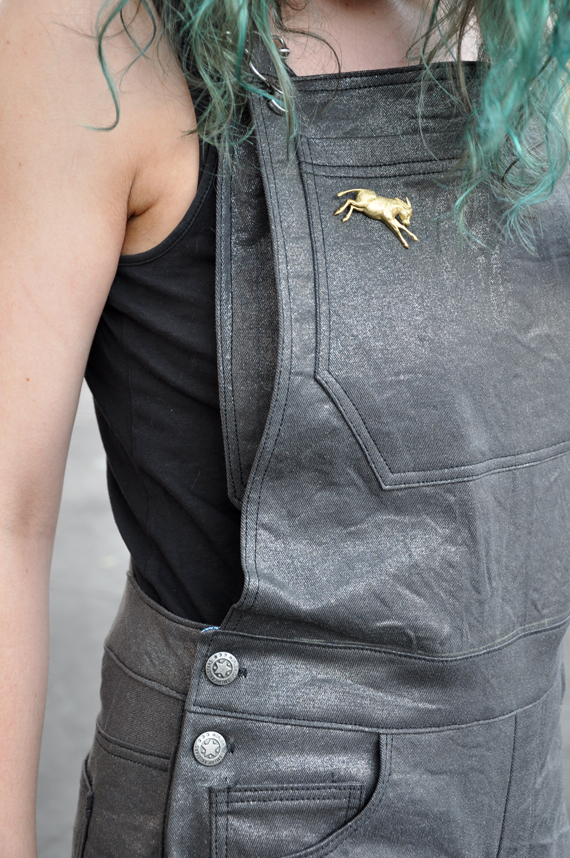 I originally wanted to make a second pair of Ginger jeans out of this, but then I thought dungarees might get more wear in a way. With jeans you still have to pick a top to go with it, while dungarees are more like an outfit by themselves... Does that make sense? I only got 1,5 meters because I'm still delusional about fabric yield (and intended to make jeans at first anyway!) so these had to be shorts, which is fine, because I wore the shit out of those other short dungarees I made until they got wayyyy too big on me. 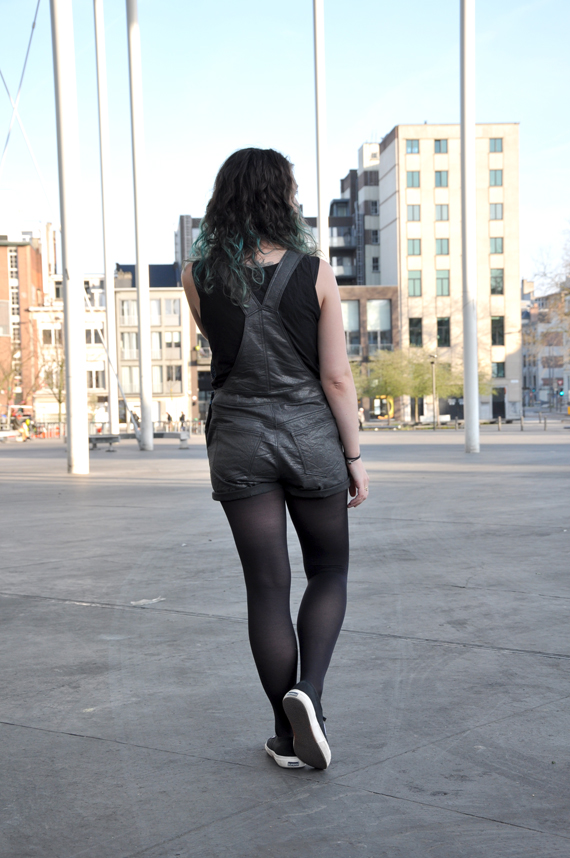 Let's talk pattern! These are the Morgan jeans, shortened a considerable amount of course, and with some modifications. Adapting a jeans pattern for dungarees isn't too hard, you just have to split the waistband in two pieces (one for the front and one for the back) and create some facings and fly shields for the side splits. I 'drafted' my own bib, back piece and straps for this and it worked fine. The front bib is maybe a tiny bit too large/long though. 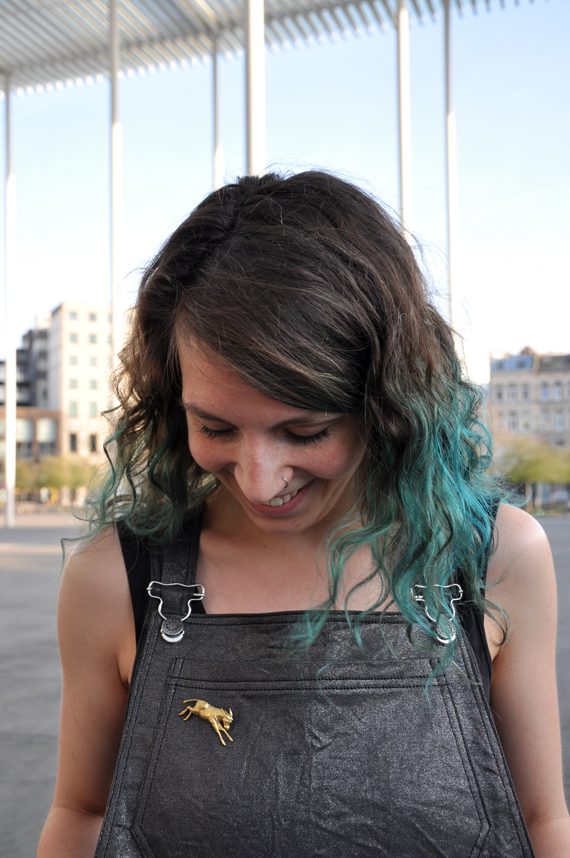 Sewing this went really quickly, I've been on a bit of a jeans sewing kick lately (there are some silver shorts still to come!) so the construction was still fresh in my mind! I topstitched the hell out of this with black thread and my usual triple stitch. It's a bit wonky in places where I tried working on this late at night, but I'm pretty sure the glitter will distract from that! 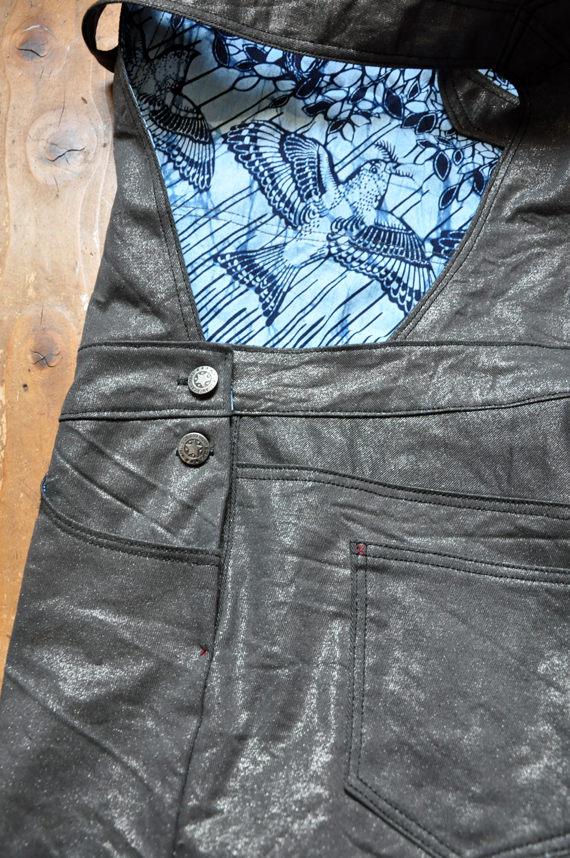 Some details: I lined the bib and waistband in a sturdy wax cotton. I used silver buttons and couldn't find any silver rivets nearby (whyyy) so I used a little burgundy cross stitch instead. It adds a nice little detail! (eagle-eyed readers might notice I added these after taking pictures...) 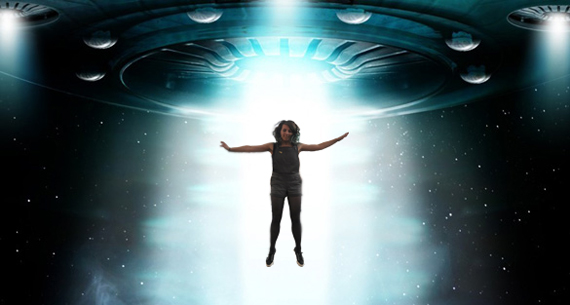 Looks like the alien garbage truck has arrived. I'll try and post those silver shorts if I ever make it back to earth!
Gepost door Anneke op 01:43 Geen opmerkingen: 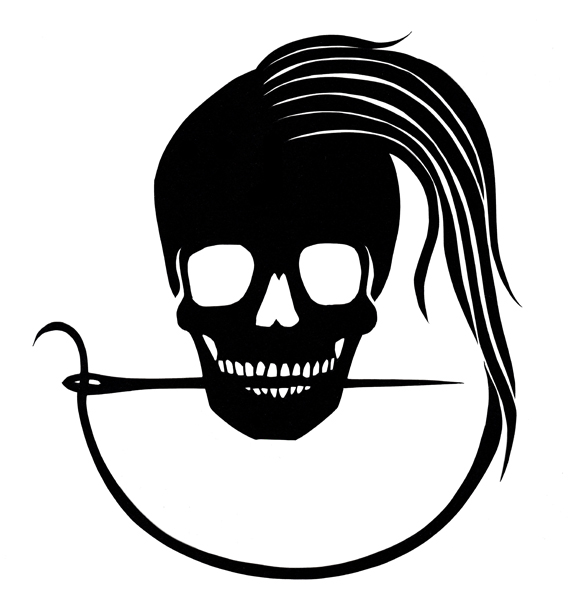 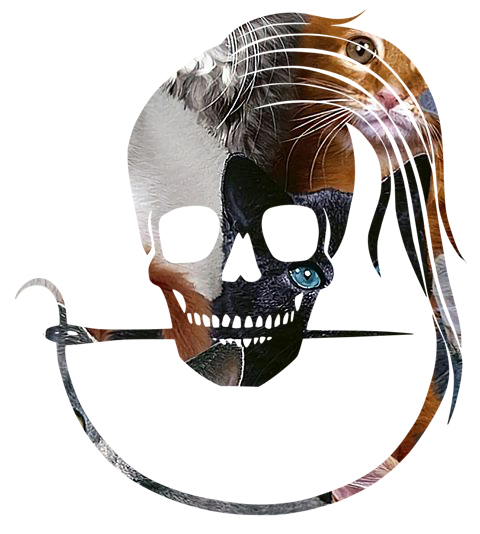 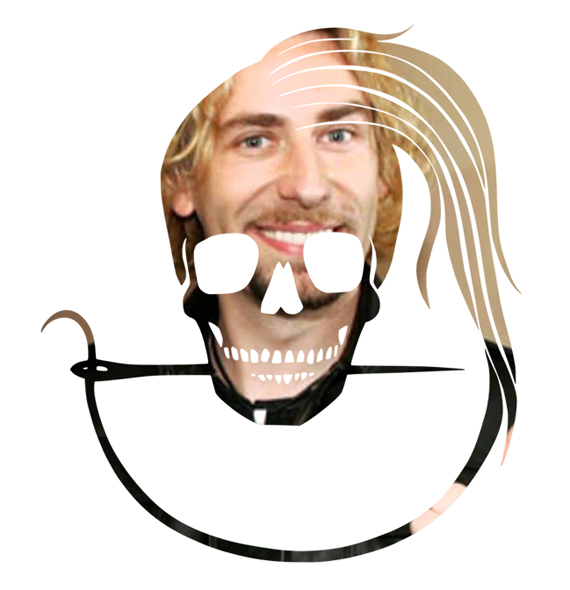 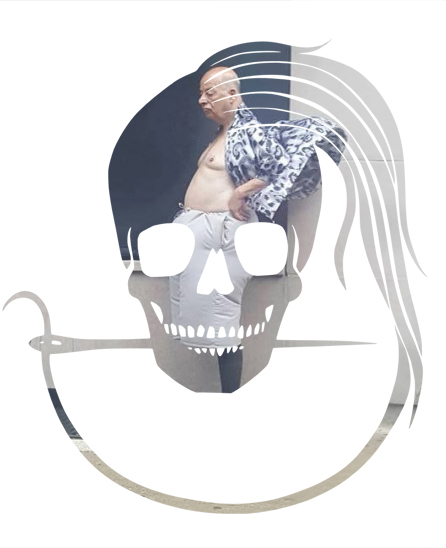 Cuz Ur a Sky Full of Starz

I was wondering about my style recently. I have definitely branched out from wearing mostly fit-and-flare silhouettes over the past few years, but I did notice that I wasn't even wearing those fitted bodices with full skirts that often anymore. And then it dawned on me that most of the older clothes I have in my wardrobe are a bit too big now, which means that the silhouette is kind of lost and they feel frumpy. I had a massive clearout a few weeks ago, getting rid of things that no longer fit my body or my style, and kept a few things I'd like to rework some day to get them wearable again. In the meantime I started on a few new dresses in that old beloved silhouette, and here's one of them! 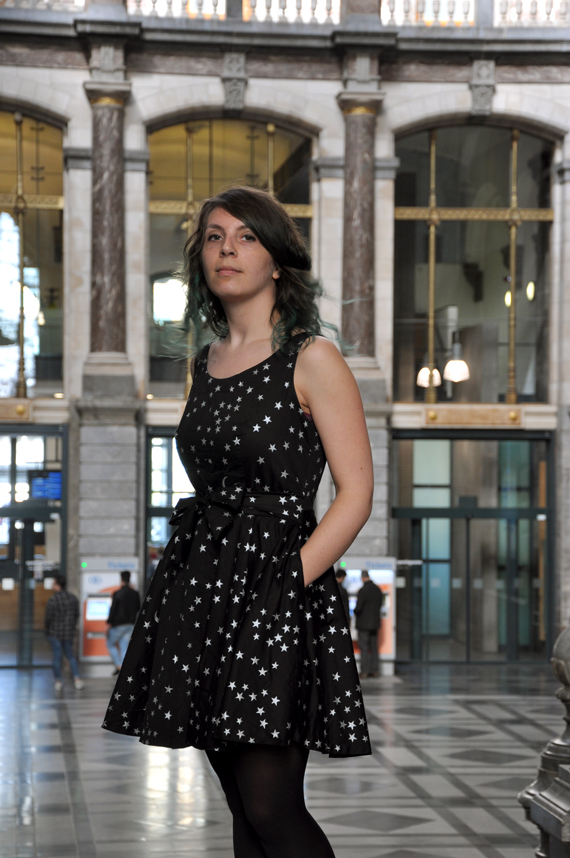 The fabric for this dress was thoughtfully bought by my boyfriend as a Christmas gift, after I sent him a link and how much yardage I wanted. It's a cotton sateen with stars and moons printed in silver, in a kind of random pattern. I know I'm basically a parody of myself by now, but I love a good star print! 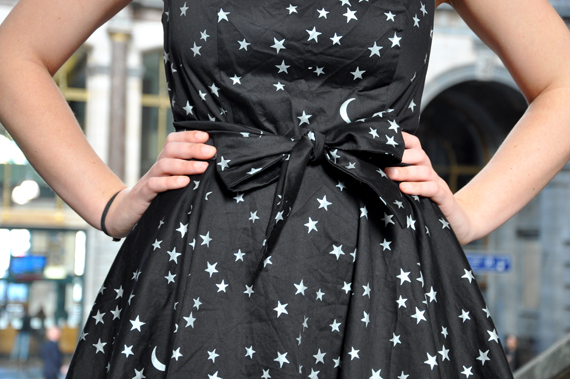 The fabric looks fine in real life, but super wrinkly in photos. Or maybe I should just get over myself and iron this one. I used my bodice block (again!) with a slightly raised and widened neckline and a shallow v-neck in the back. The skirt if a full circle skirt, which I seem to prefer over gathered skirts at the moment (although I'll always love me some poofiness). I also added two ties to the side seam to I could tie a bow in the front or back, and maybe cinch the dress a bit more if necessary. I thought this fabric would look better with a bow than with a belt! 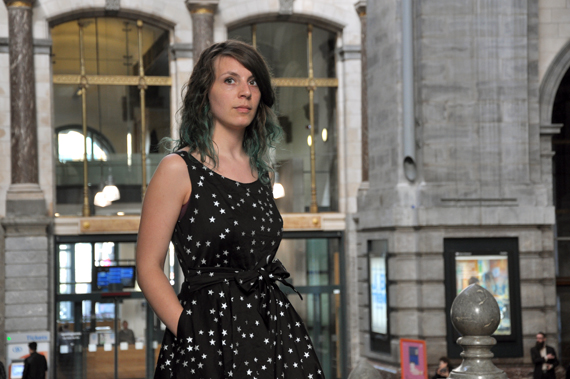 I do feel it's time for me to take a long hard look at my block. I lost quite a bit of weight the past few years (intentionally, so don't worry) and I've been adjusting it on the go, mostly just by taking in the side seams. My shape has changed quite a bit though, so I'll have to make a proper muslin sometime and make some serious adjustments! 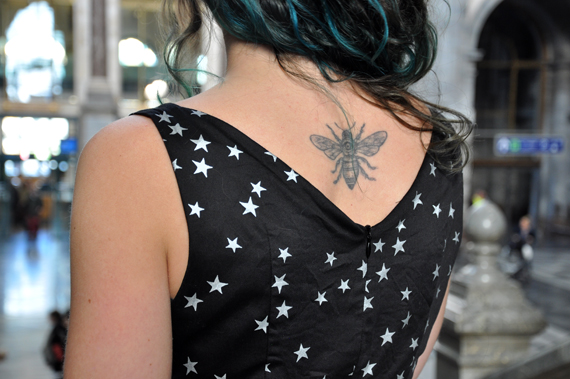 I like how this dress turned out though, even if there's some weirdness around the bust and waist. It's one of those things I wear on regular days when I feel like wearing something a bit more 'special', especially with my silver David Bowie party shoes. I wore it on a trip to the zoo this time, where we spotted a meerkat who was having some kind of revelation: 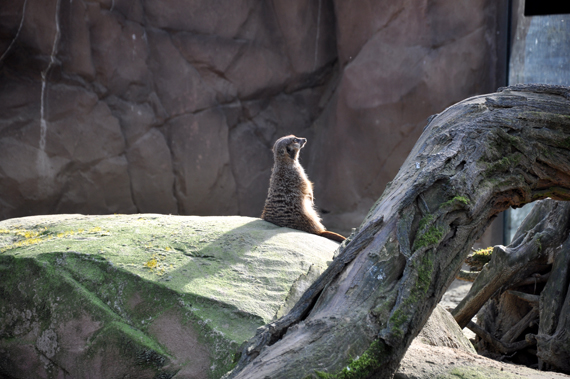 And for those of you wondering about the title: I had this stupid Coldplay song stuck in my head (for obvious reasons). Good thing it was this version: