I seem to have taken a bit of a blogging break! It's been a bit crazy around here, a lot of things were made but not really documented. The biggest thing I made the past few weeks was a project for a drawing festival called Tekenpudding, organized by my amazing friend Charlotte Dumortier. It's a sort of drawing funfair with, apart from the usual talks and zine fair a bunch of attractions. They had an open call for booth ideas so me and my Veranda buddies got together, submitted an idea and then heard we had the all clear to build it!

We wanted to build our own version of the automated fortune telling booths we'd encountered on our US roadtrip last September (Zoltar being the most common one, although we did find an Elvis or two), with a little twist: the fortune teller would only predict bad news. However, our skills are a bit limited when it comes to building robotic wizards. Our solution: make a costume and get into the booth ourselves. Now we only had to build a booth. Easy, right? 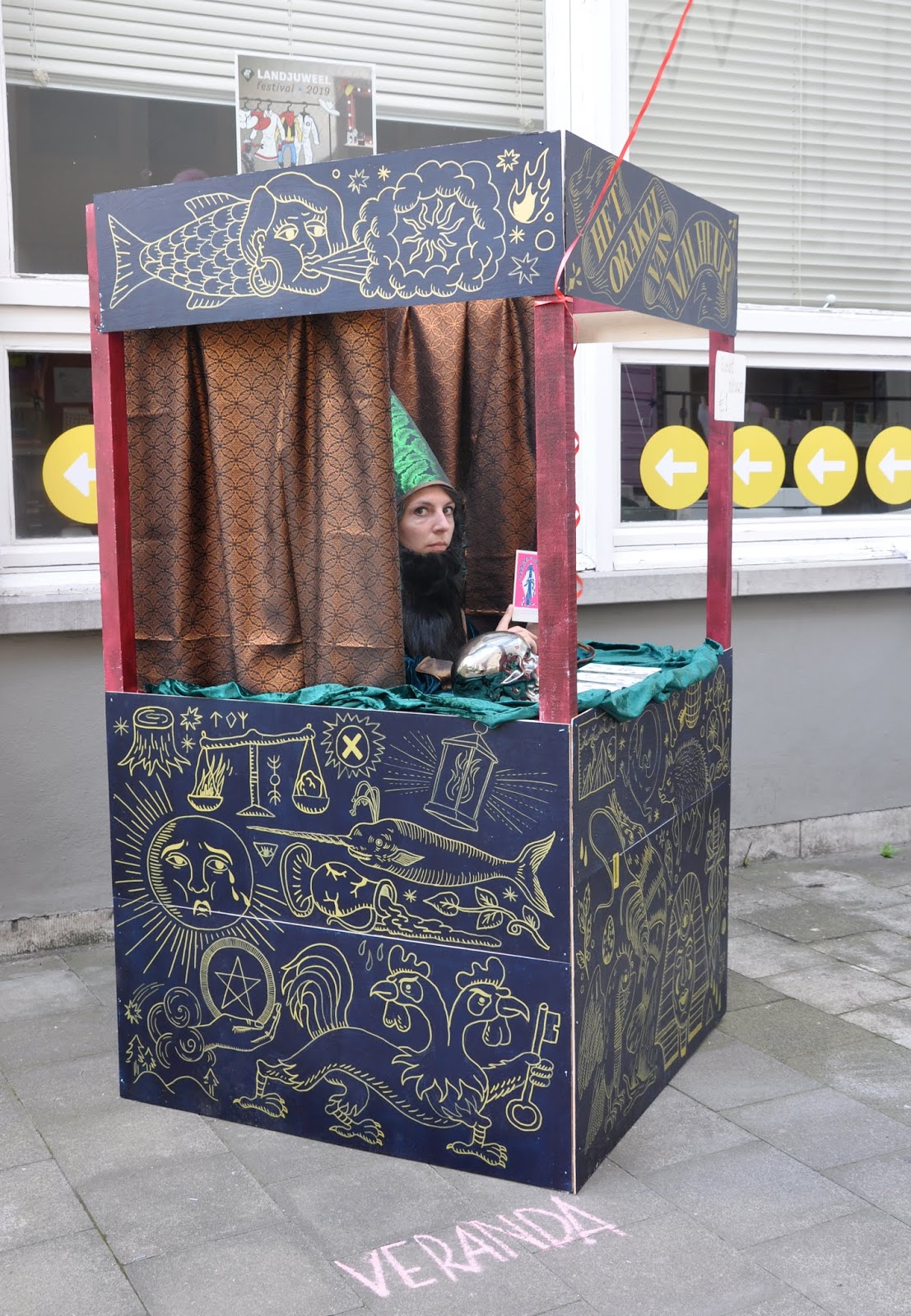 Well, it did work out! We ended up having a pretty tight deadline when it turned out that two of the three people involved were a bit too busy to get started already, so I tried to prepare as much as possible by making a costume and sourcing fabric for the decorations. I went through some fabric shops in my area and returned with a bunch of stretch velvet, some golden poly taffeta and a load of poly brocades. I then tried to make a wizard's costume (or at least, the visible top half) in a day and a half. 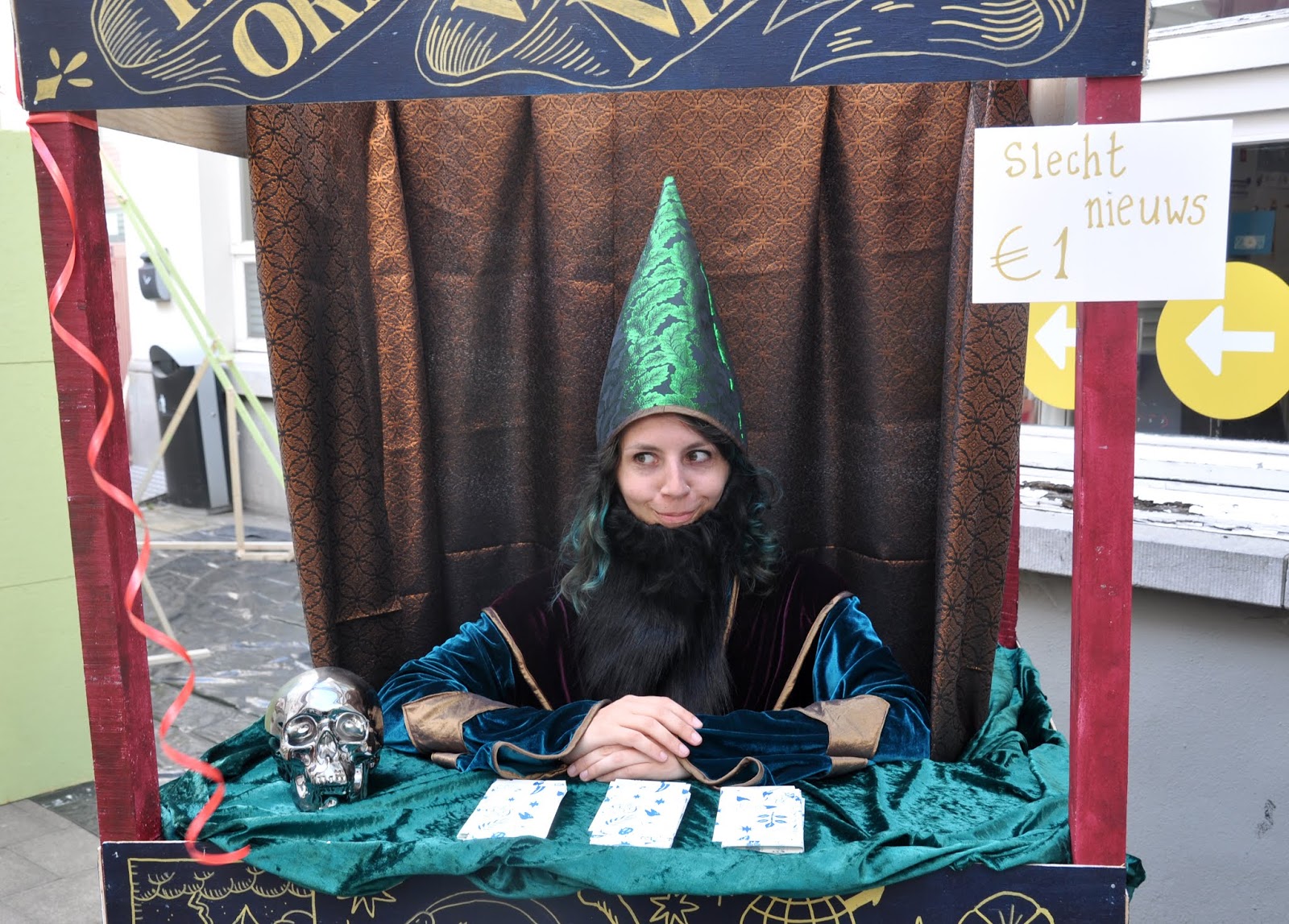 I don't really have clearer pictures than this, but it was... Quick and dirty! Three different people had to fit into this, so I traced one of Dimitri's sweatshirts (since he was the biggest) to get a basic shape to start from. The under layer is a plain t-shirt with very wide sleeves, with a little robe/jacket on top of it. I cut the collar of the jacket on a single layer to save on fabric and finished the edges with bias tape made from golden taffeta. I also used the same taffeta to add a little decoration to the sleeves and finish the sleeve hems. Sewing this very non-giving taffeta to slinky stretch velvet was an adventure, but it worked!

I ended up attaching the jacket thing to the shirt at the shoulder seams and sewed it together in the front, covering that with two decorative buttons. This turned out to be a good idea because now we wan just pull the costume on over our head without having to pay attention to things laying right! Finally, I made the hat by ironing a heavy interfacing to two cone-shaped pieces of brocade, stitching them together and turning. The edge is finished with more bias tape to tie it together. The hat is a little big (there was wig talk at first) but I might have worn it to a bar afterwards. A cheap costume beard finished the whole look! 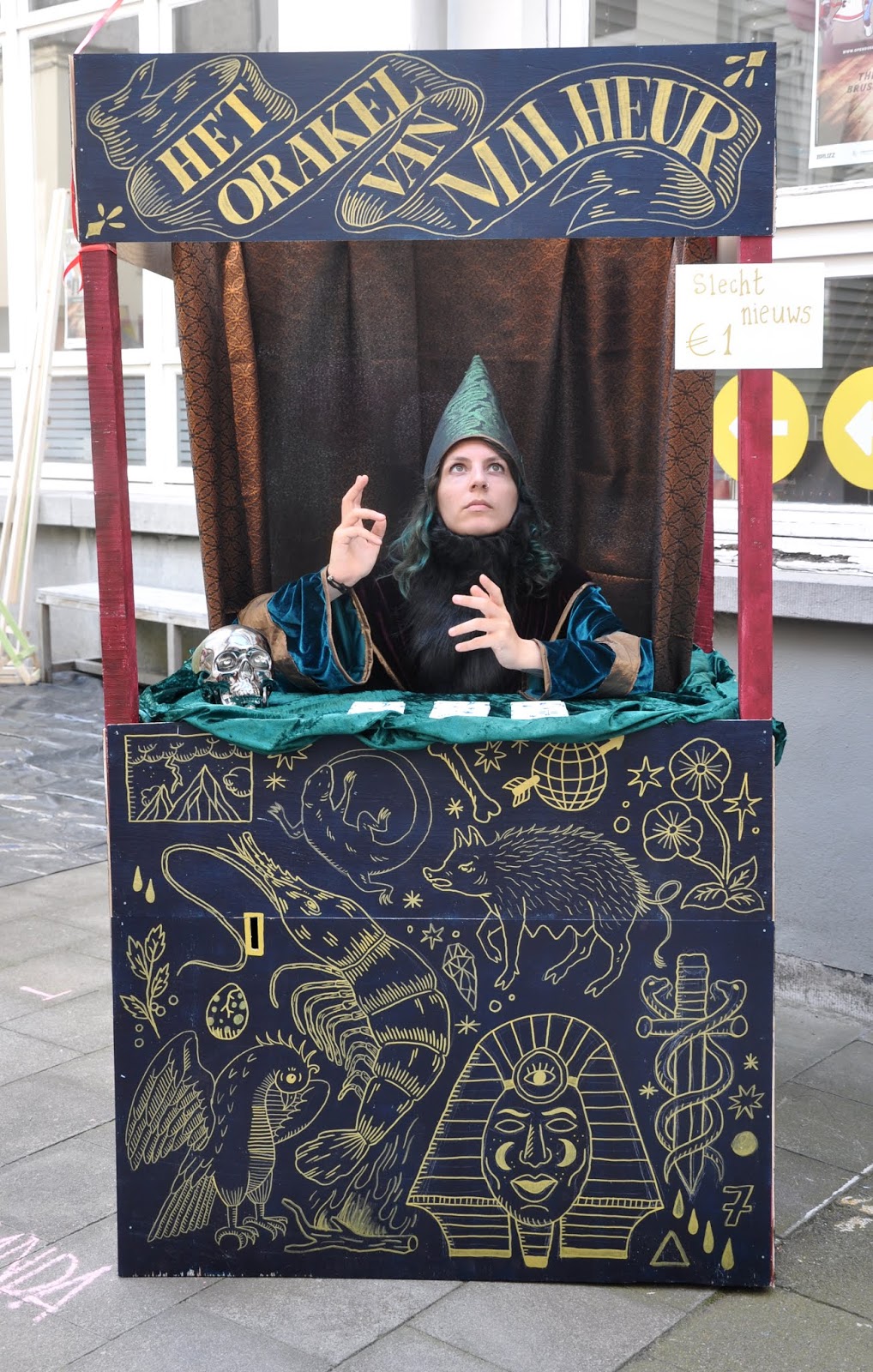 With this sorted out, we tackled the actual booth. I think it was a good idea to make the costume first so we could choose our paint colours around that, since it's much easier to source a paint colour than a specific fabric! We sourced a few wooden beams and leftover pieces of plywood, and I made a little sketch of how things could go together. It had to be somewhat sturdy, not too precise, and not too had to take apart and put together again (since we would have to transport it in pieces). We ended with a wooden frame that was the same width all around, with all the wooden crossbeams postitioned so they would be covered with panels or fabric. The back part is open for easy access, and there's a little table at the front for props, cards and dramatic leaning. 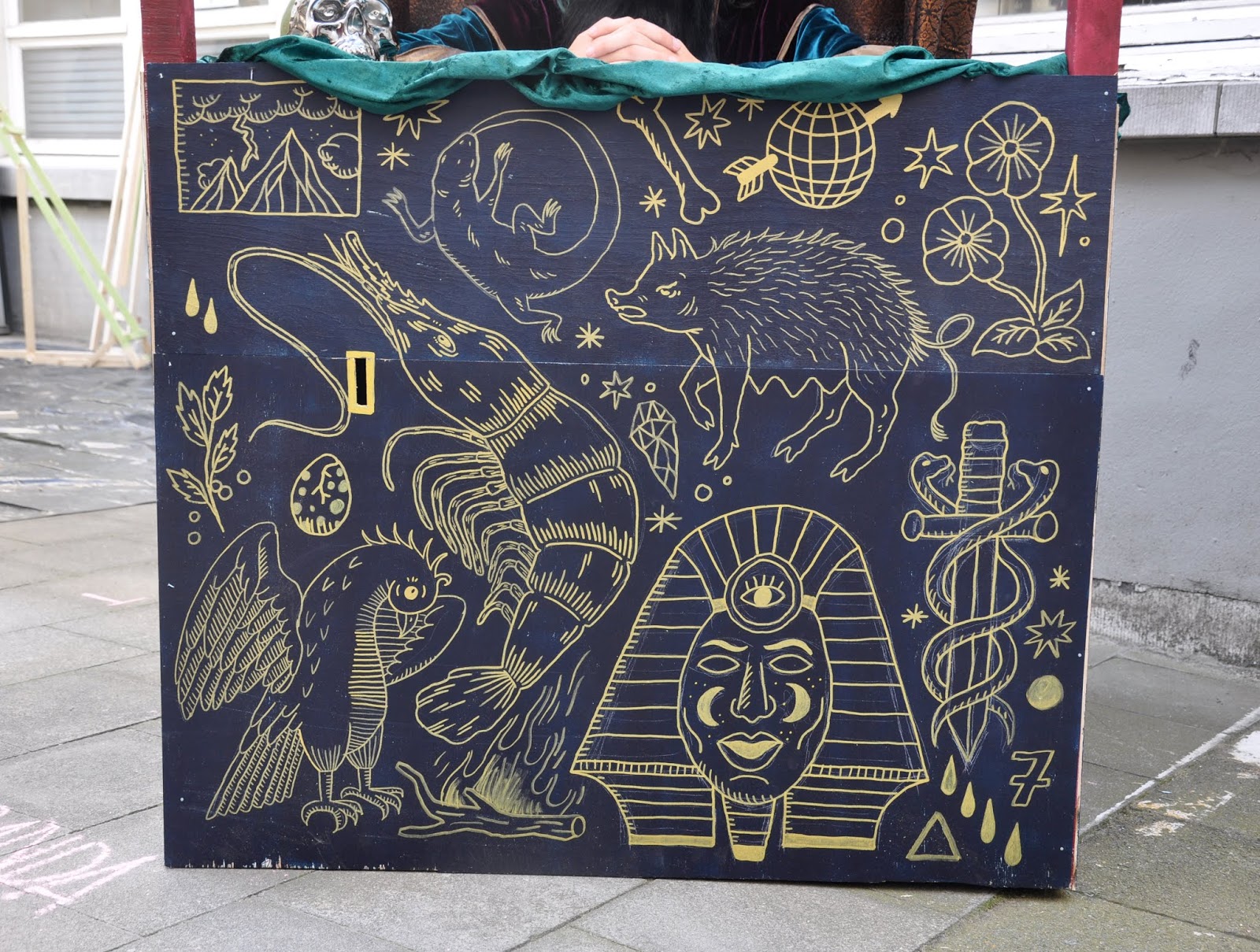 The biggest job was painting. We primed everything and then I spent a couple hours putting down the base colours (plain old acrylic paint). After this we went through all our books with old etchings, tarot cards and other magical things and sketched out a bunch of things for inspiration! Me, Hélène and Dimitri then all got thogether and covered all the panels with drawings in gold paint marker. And I mean covered: 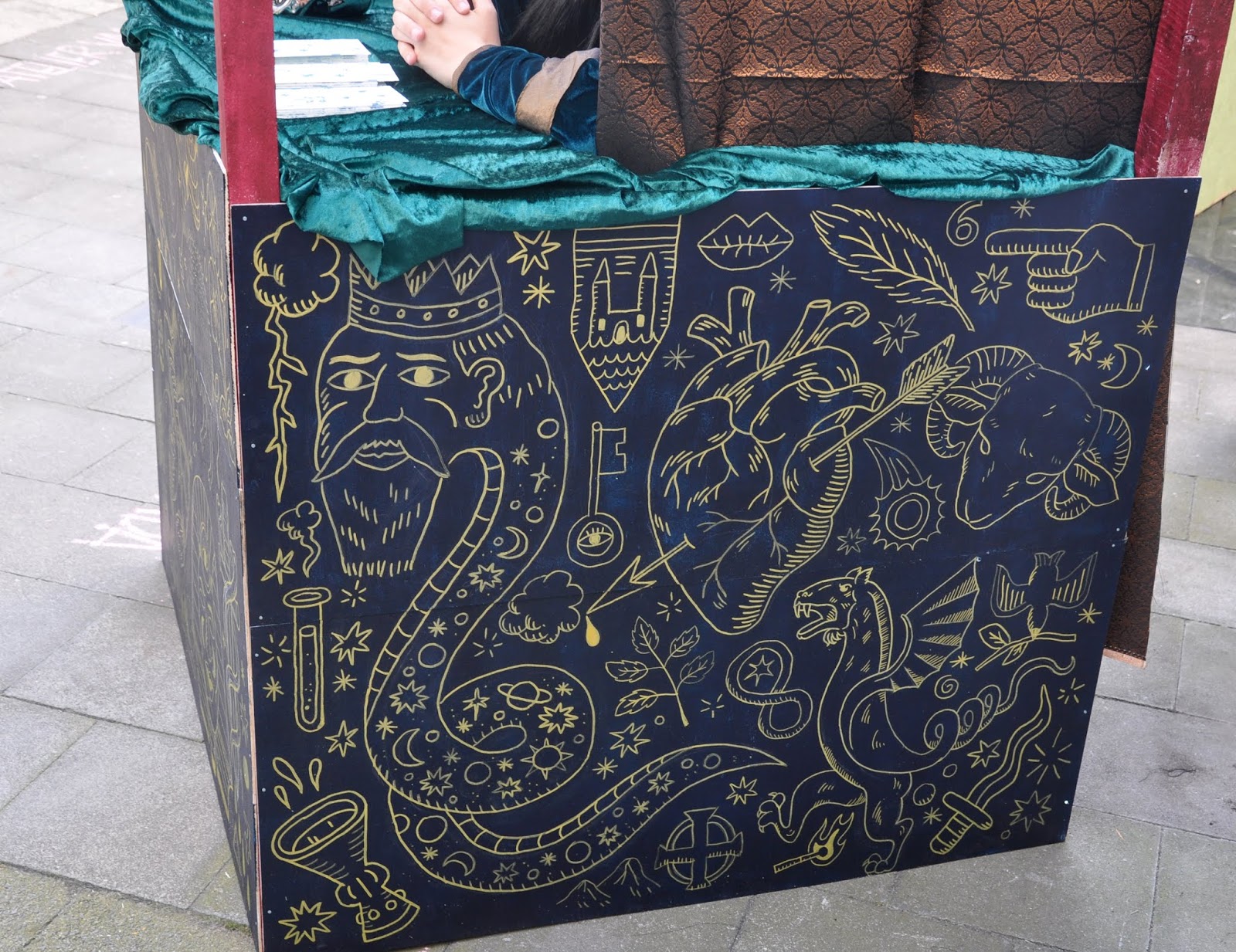 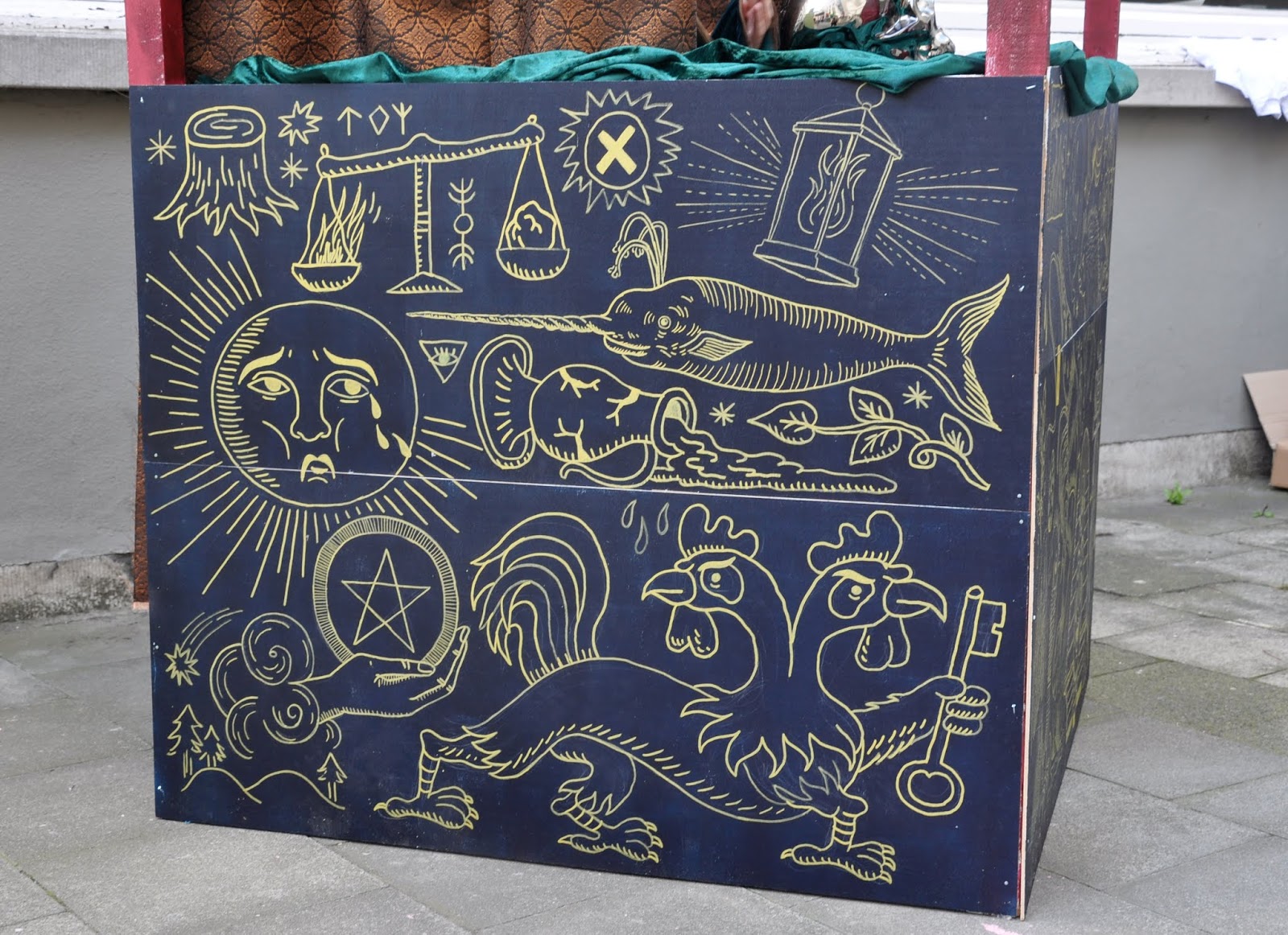 We were very happy with things at this point, and relieved it worked out! Our idea was that people would insert a coin into a slot at the front of the booth, and then get a little spoken prediction and a printed card with an illustration and some more wisdom, most of it bad news. At first we were going to have it printed somewhere, but then Hélène got all next level and decided to screenprint the cards. I designed a little tiled pattern with little things we'd drawn (recycling a fabric design I'd made before) and each of us made two small illustrations for the front. We then wrote a few short words of wisdom/horoscope type predictions and all this made for some really cool looking cards to hand out! 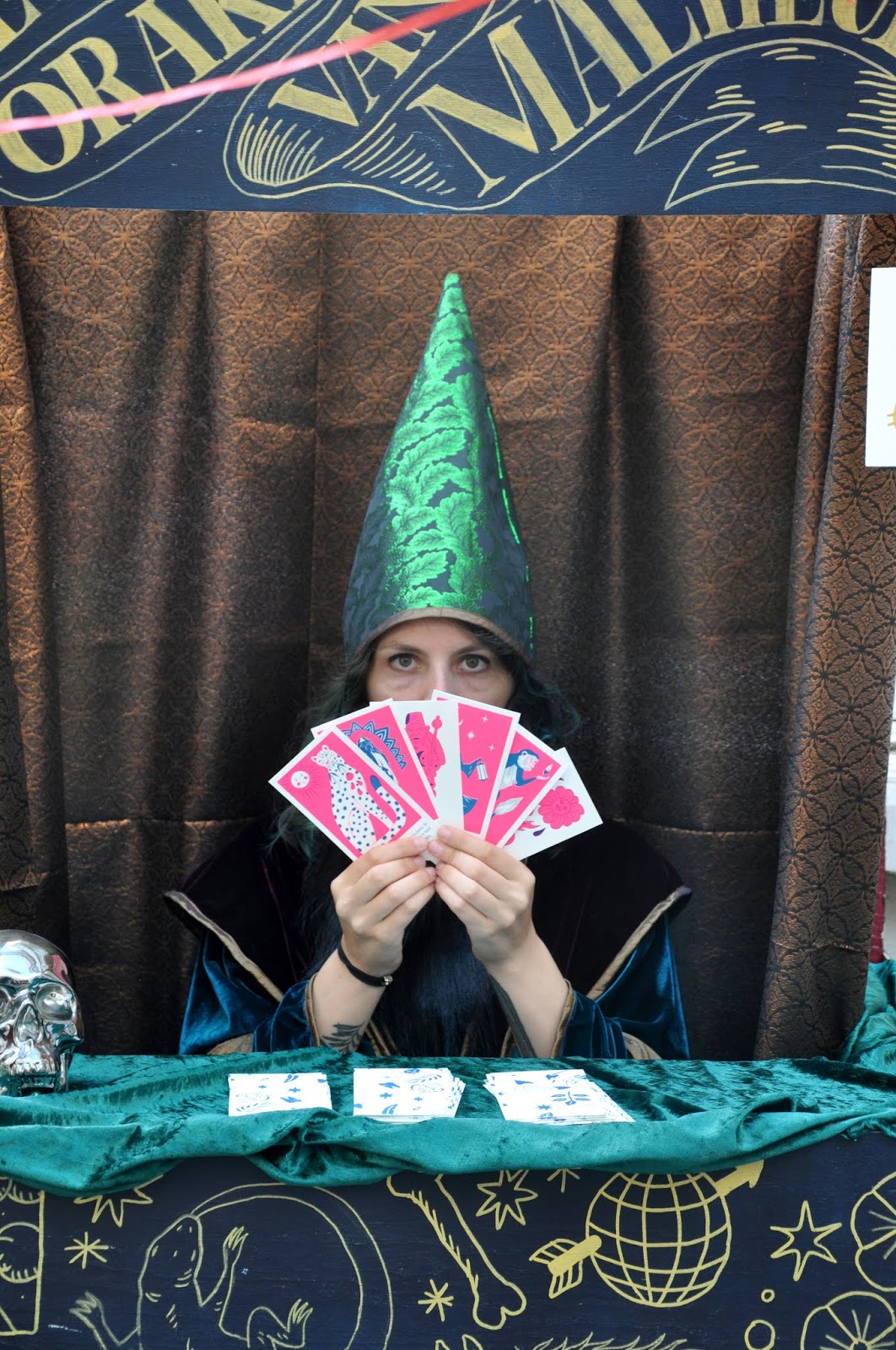 We were at the festival all day and had such a blast! People really wanted to hear how their lives would go wrong, and I actually did a few scarily accurate predictions. This is something I definitely want to do more of, all we need is an occasion!

We had a lot of fun working together to make this, especially because it wouldn't have been possible without a few other amazing people. All the love to Heziz for helping us source some materials, and to Viktor for helping out with the heavy machinery and tolerating us in his workspace! And of course, the entire Tekenpudding team for letting us do this!
Gepost door Anneke op 01:53 1 opmerking: