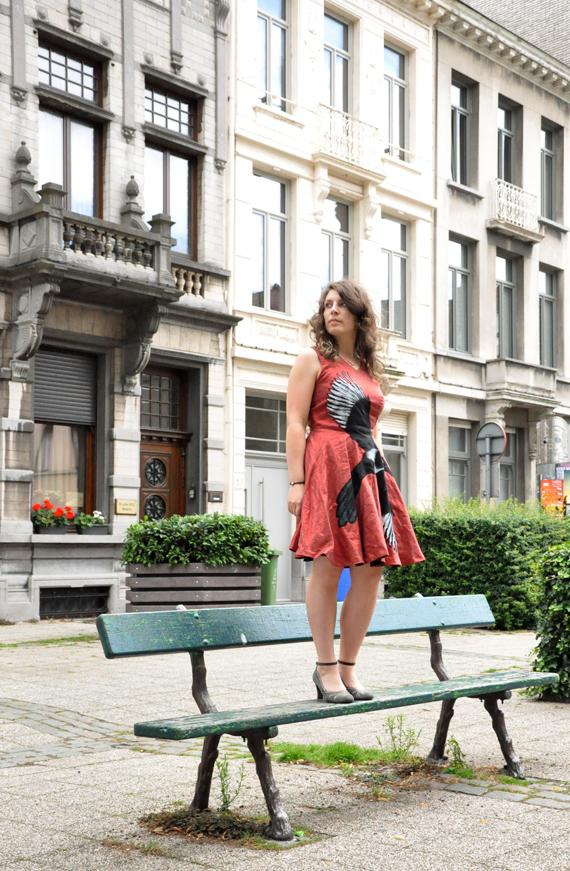 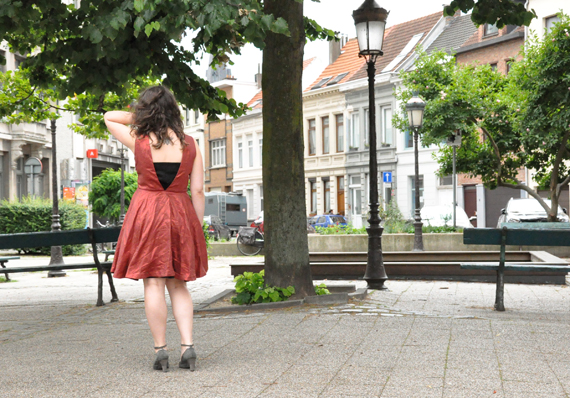 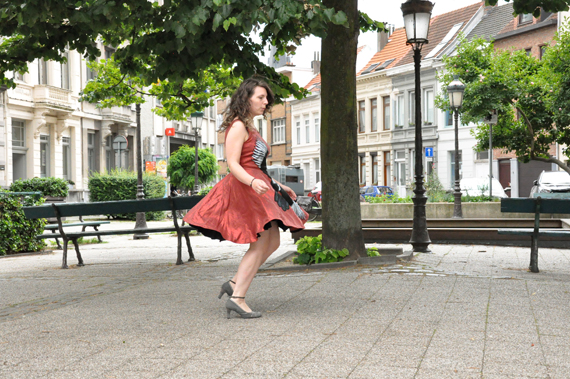 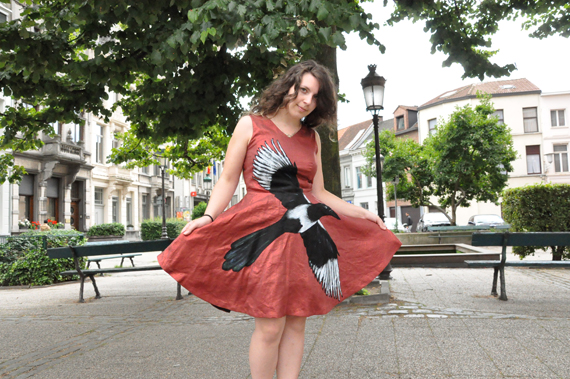 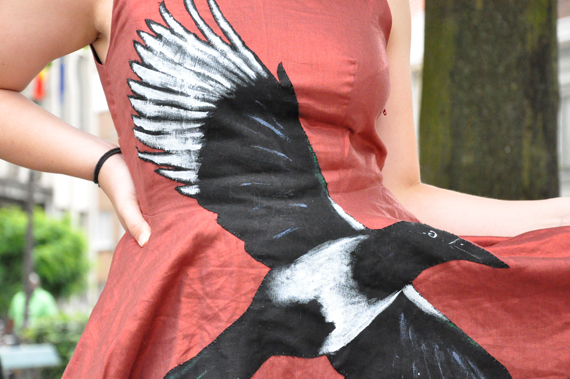 My Dungarees still make them Hungry, and then I tell you how to do something.

Remember when I made dungarees before and said I was going to make the short version next? I had envisioned these for colder weather (with tights) but after the success of my playsuit I felt a sudden need for more grown versions of children's clothing, so I here are the Pauline Alice Turia dungarees, part two!

Sadly, I took pictures whilst rushing around a cool museum with friends, so the only shot of the entire thing is this one:

We went to see an exhibition about Belgian fashion, and I'd definitely recommend it! It was a collection of garments by different designers and from different times with no clear theme, but you could get really close to the garments to take a look. Way nicer than looking at them behind glass!

There were loads of things to covet as well: 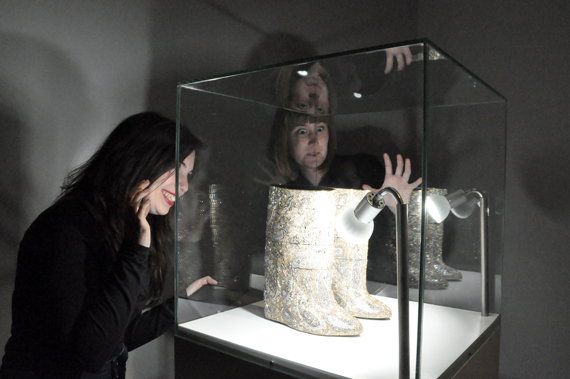 That being said, I made some dungarees. These are the short version of the pattern, with no real fitting adjustments. I did change a truckload of things: 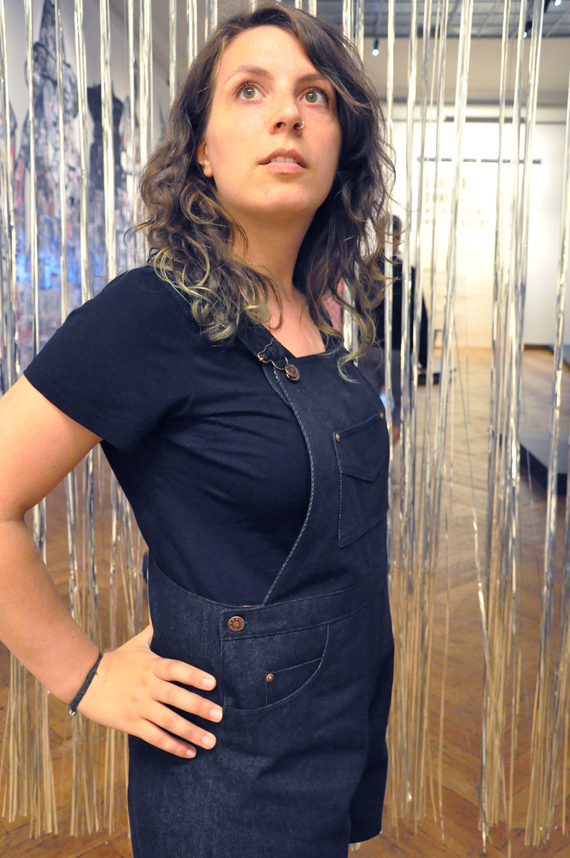 I like the first pair I made (where I followed the pattern to the letter) but thought some of the details were a bit too homemade. So I gave the front a waistband, used a button instead of a zipper as a closure and added more of a jeans-style pocket (and even a coin pocket!) instead of patch pockets. This was super easy to do! I even wrote it down in case someone else wants to give it a go:

I also lengthened the straps by about 20 cm, which means I can thread them through the clips with plenty to spare and enough room to move. The crossroads demons from a previous post came back at this point, and went at it with their best Britney impressions: 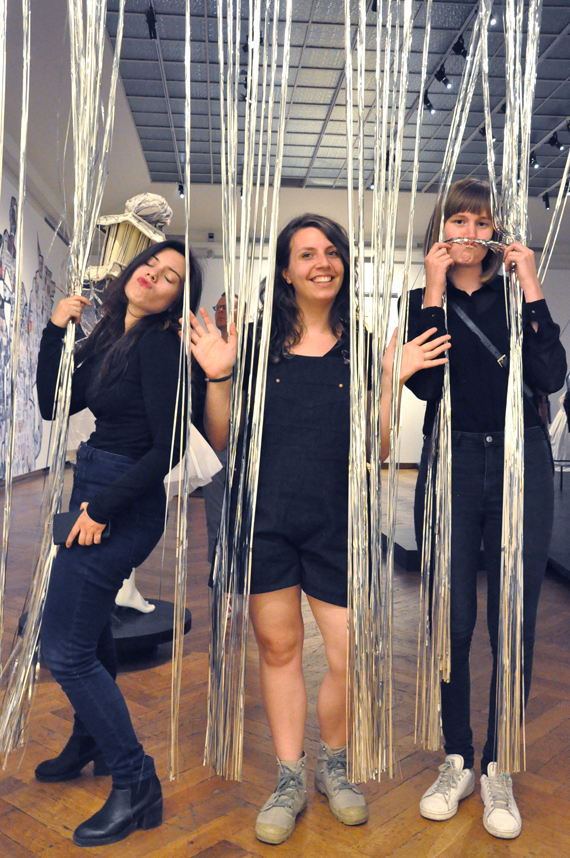 I used a pretty heavy dark gray denim for the body of the dungarees, and decided to use something lighter for the facings. I have some treasured scraps of space cotton left, and used them for the inside. 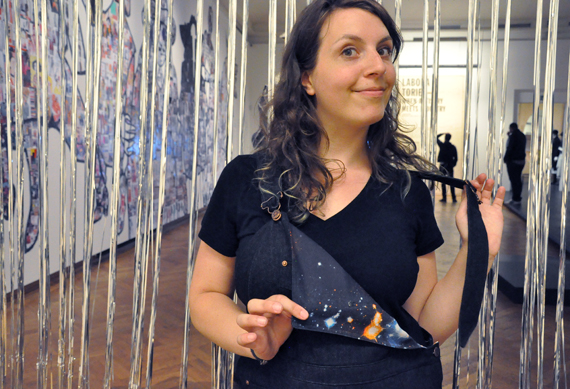 The back piece is faced like this up to the waist as well, instead of only just below the straps. I might add some bias tape to the part below the back facing, since it's the only raw seam that's sort of exposed (the instructions have you just fold the edges down and topstitch, which looks nice from the outside but not so nice from the inside). I do love getting a glimpse of space when I take my clothes off! 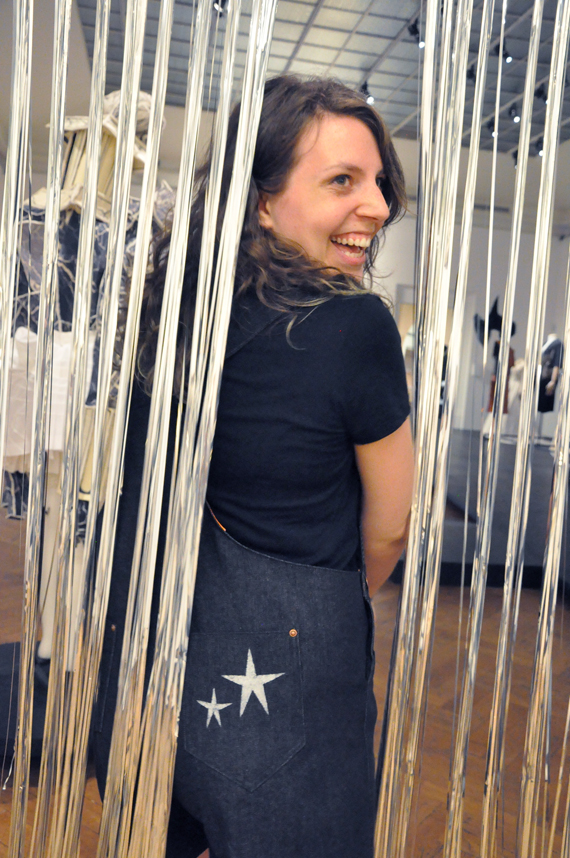 I also made the back pockets a bit larger (they are the same size for every size and I felt they were swimming around on a vast expanse of fabric in the previous version). I toyed with the idea of adding a label or patch somewhere, but went with a few stencilled silver stars in the end. Heh heh, butt stars!

I love how this turned out, and already wore it quite a lot! It's an easy thing to throw on when you have lots of cycling or walking to do. It was perfect for this day in Brussels as well! After the exhibition we did a little workshop where you could recycle old clothes into something new. The results were surprising! 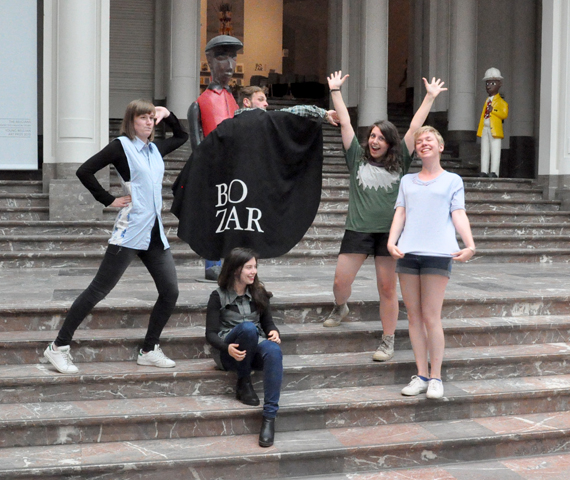 There is video footage of me running around in the cape my friend Maarten has made. Good luck finding it.
Gepost door Anneke op 09:00 Geen opmerkingen:

People, it has been hot as balls lately. I don't cope well with heat, and it has led to some emergency sewing (one time when 'I don't have anything to wear!' is actually true!). With predicted temperatures up to 40° celcius and air conditioning at work that's less than reliable, I needed something loose and comfy. 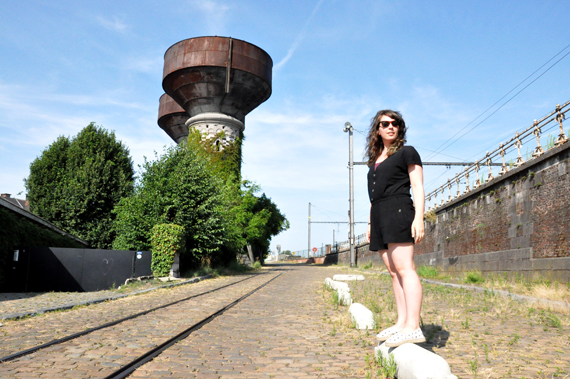 Enter the Salme patterns playsuit. I've had this pattern for YEARS but something kept me from making it (mostly the combination of not being too fond of my thighs but not liking longer length shorts either. No idea why I bought it in the first place.)

Just a word of warning: The instructions are brief. They're literally one page with a few diagrams (which is, admittedly, more than what you can say about Burda). They weren't always clear either, by the way. I don't think I would have figured out the pockets when I first bought the pattern! 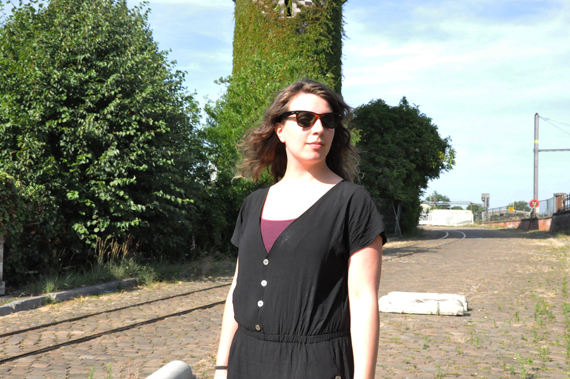 As you can see here, I omitted the waistband. That's because this thing is apparently drafted for people who are a lot taller than me! It's weird, I've never really had to adjust patterns when it comes to torso length, and now this is the second time in a month I come across something that is at least ten cm too long! As a quick fix I decided to just skip the waistband and make the casing in the waist seam. (Another thing that wasn't very clear in the instructions: they tell you to cut a rectangle of a certain size for the waistband but omit to mention that you actually need two! One for a lining.) 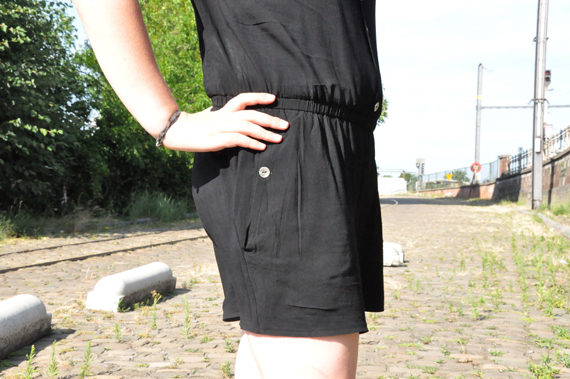 I had lengthened the shorts a bit to make sure I didn't end with buttcheeks hanging out (there's only so much I can get away with at work) and I ended up chopping it all off again because the shorts hang a bit lower now! The good thing is I can easily bend over now without worrying about bursting out of my clothes. I also added a button to the pockets to keep them from hanging too much. 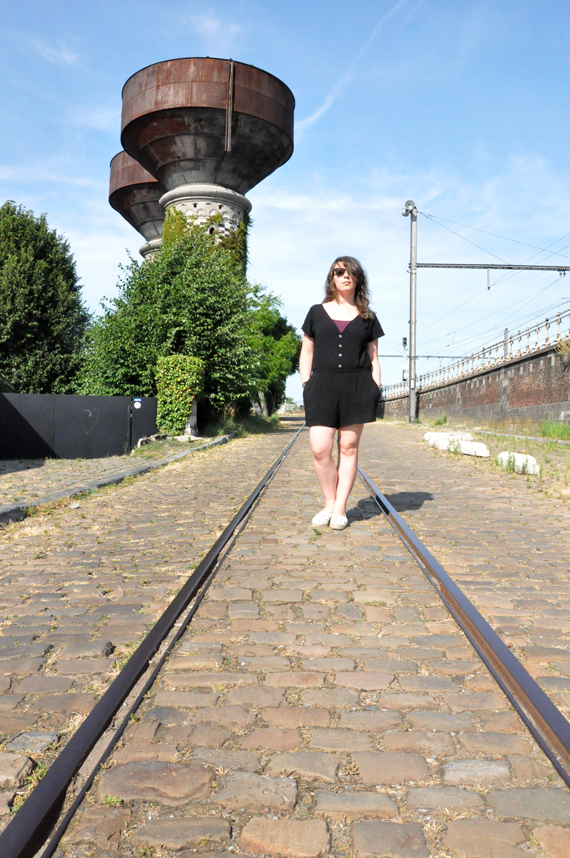 The fabric is a nice and drapey black viscose I've had in my stash for a while. Nothing much to say here, it's like most of this type of viscose I've worked with: sews and presses well, awesome to wear. 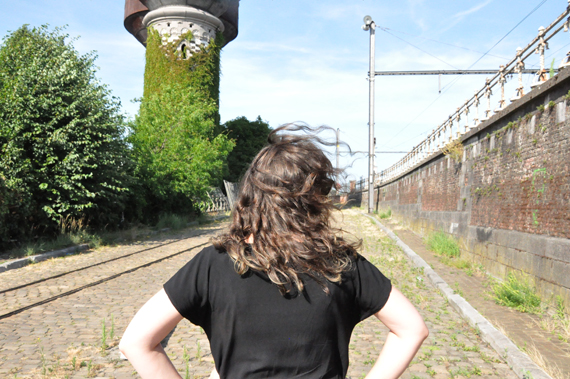 The little kimono sleeves are pretty awesome! I get sunburned really quickly, so covering my shoulders (and loads of sunscreen) is always a plus, but nobody wants to wear sleeves in the heat... So something light and flappy that just about covers them works well enough. 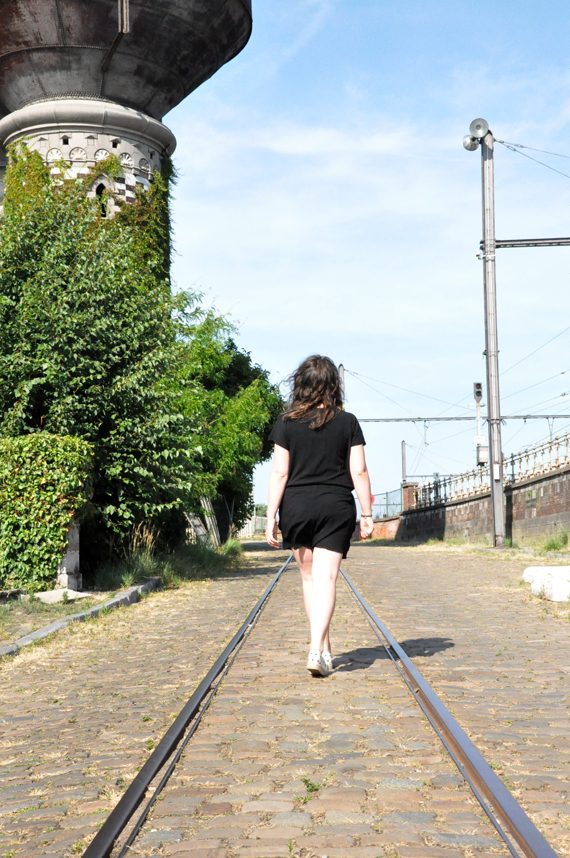 If I make this again i'd definitely take some length out of the bodice. The reason that I didn't do that on this make is mainly because the excess length is more in the shoulder/neckline area: it's way too low to wear without a top underneath it. Apart from the weird pocket instructions (which only really make sense if you use a pocket lining with an entirely different colour) and the slight fit issues I really like this pattern, and might even make a second one!
Gepost door Anneke op 01:06 Geen opmerkingen: