And Now For The Action-Filled Sequel!

As I said in my previous post, I finished my Carlita coat! Joost and I actually had this whole idea for a nice photoshoot in a cool location, but then he got sick and we kind of had to scramble to find a moment before he left on a (well-deserved) vacation. But hey, it all worked out, and here are our coats!

So at the end of my previous post about this coat I had tailored my coat fronts and back. Next I assembled fronts, inserting a welt pocket into the seam right below the bust. This was way easier (and less scary because no slashing fabric) than a 'proper' welt pocket, since it's basically an inseam pocket with a welt added to it. Pocket pocket pocket. After stitching the princess seam I could attach the patch pockets! Both the pocket and pocket flap are lined in a not-quite-matching lining material to reduce bulk. I often see instructions telling you to trim 1 mm away from the lining edge to make it roll under nicely, but when researching for this project I came across someone who said it was way easier and more accurate to just stretch the lining pieces 1 mm beyond the shell fabric edge. Super simple, but super efficient! I slipstitched my pockets on so there wouldn't be and visible topstitching. It looked great, but wouldn't be the end of that saga yet! 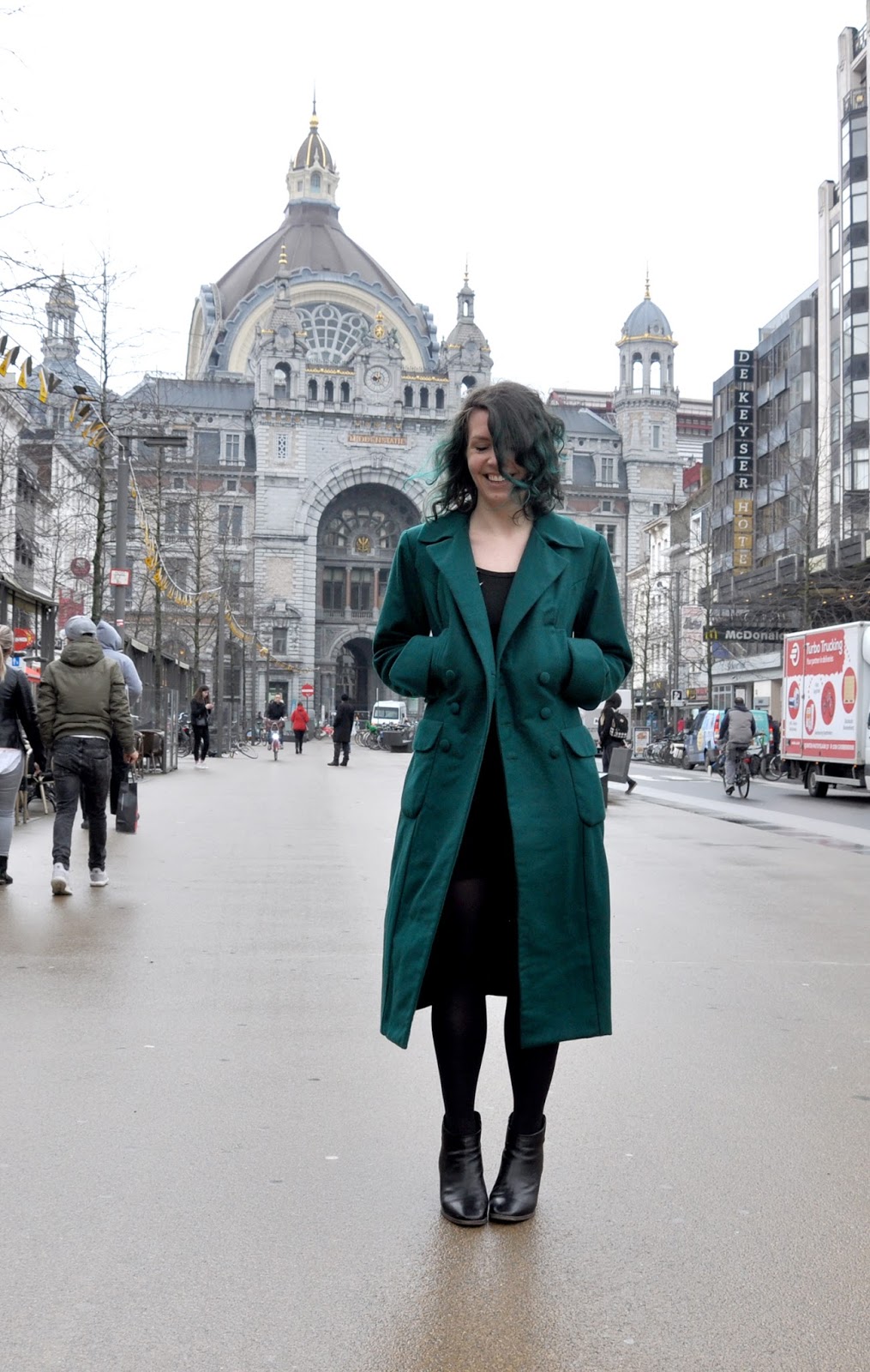 After this came the sleeves. I do have to say here that I had been cautious with transferring my changes from the muslin to the pattern: part of me couldn't believe I had to take out SO MUCH fabric and I was scared that the final coat would end up too small with all the added bulk from a thicker fabric and all that interfacing. So when I inserted the sleeves and tried the thing on for the first time, it was still quite big, and a bit of a bummer. The shoulders were still too wide, and there was still a lot of excess fabric in the sleeves. So I spent a day trying to fix it: I unpicked the sleeves, took some fabric out of the coat side seams and slimmed the sleeves down by the same amount, then tried again. 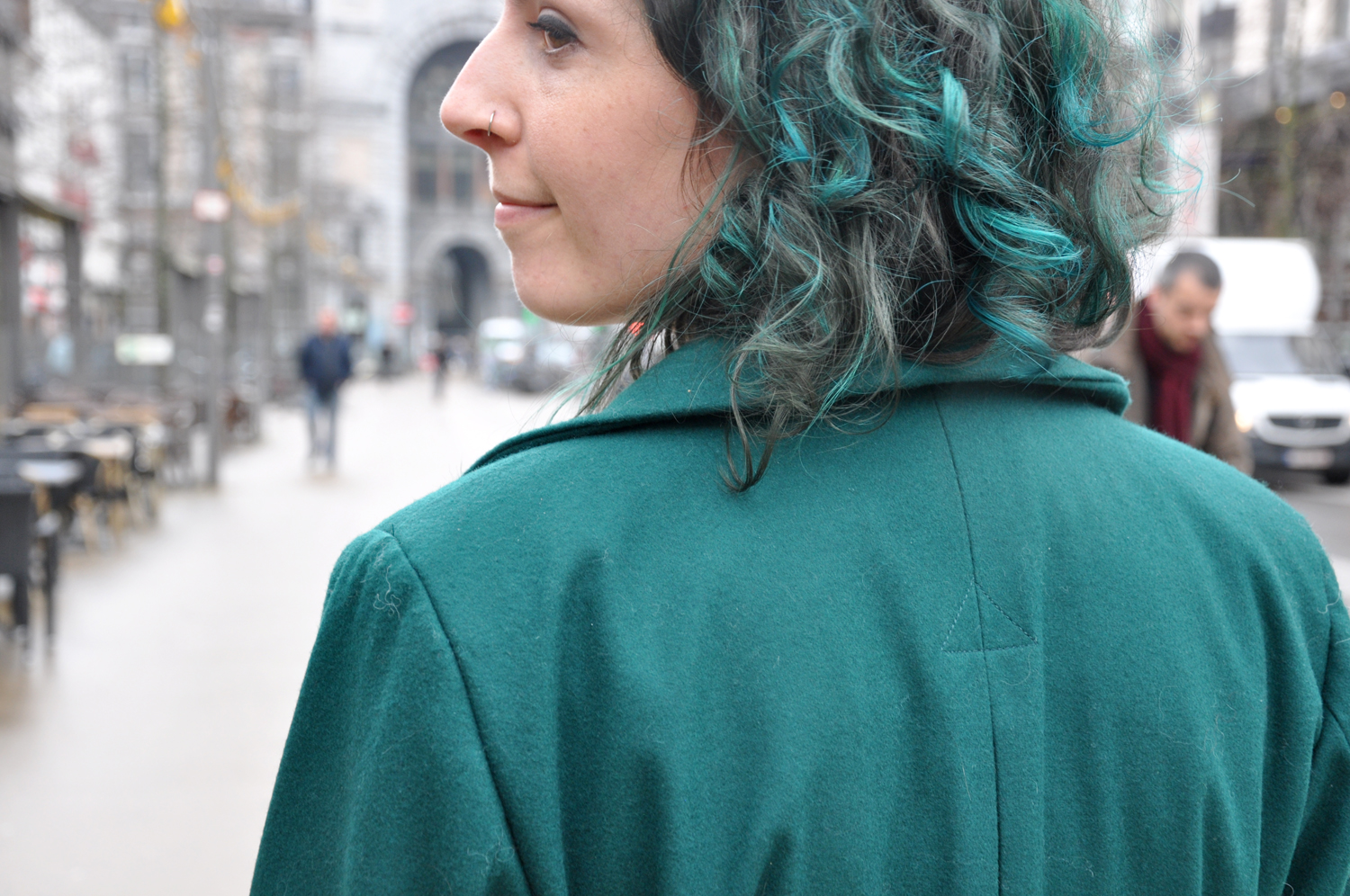 The size of the sleeve itself was better, but along the way the armhole had gotten a smidge too large, meaning there wasn't enough ease in the sleeve head, making it look a bit sad and droopy. I made my own shoulder pads from hair canvas and cotton wadding (so much fun) and added a strip of wadding to the sleeve head, but had to face that it could look better. So the things came out again, I took some more out of the side seam to make the armhole circumference smaller and tried for a third time. SO MUCH BETTER! 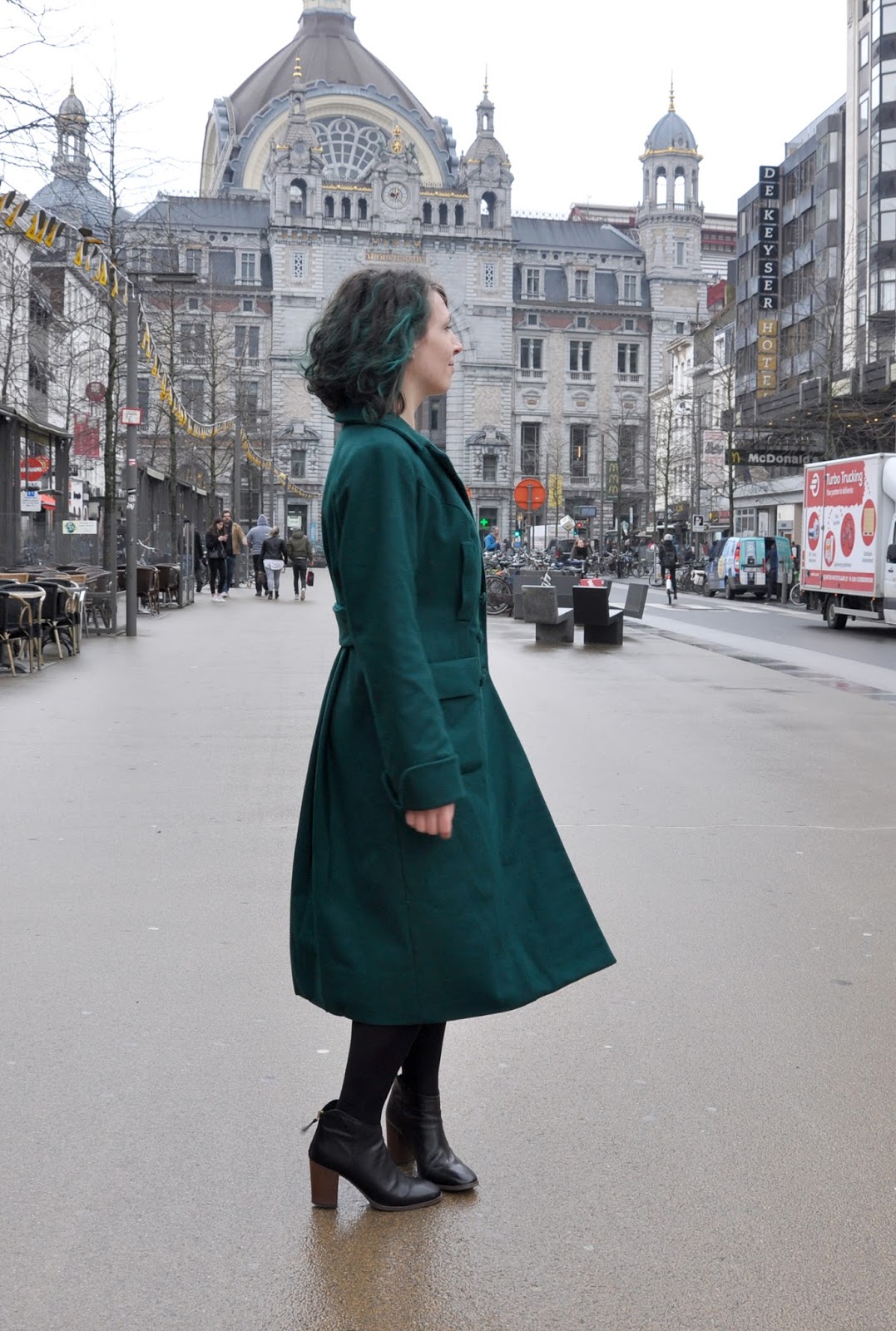 The fit still isn't perfect, but by that time I felt like I had done everything I could to improve it as much as possible. The entire front is actually a bit too wide across the shoulder, meaning there's some extra fabric bubbling there and I can't quite fill out that princess seam! I do think these are things other people won't really notice when it's being worn, especially not with my giant scarf draped over it.

I then went on to the collar. I had cut my under collar on the bias, and reinforced it with some more canvas and pad stitching to help it keep its shape. After that the under and upper collar were sewn together, pinned to a small tailor's ham and steamed into oblivion. 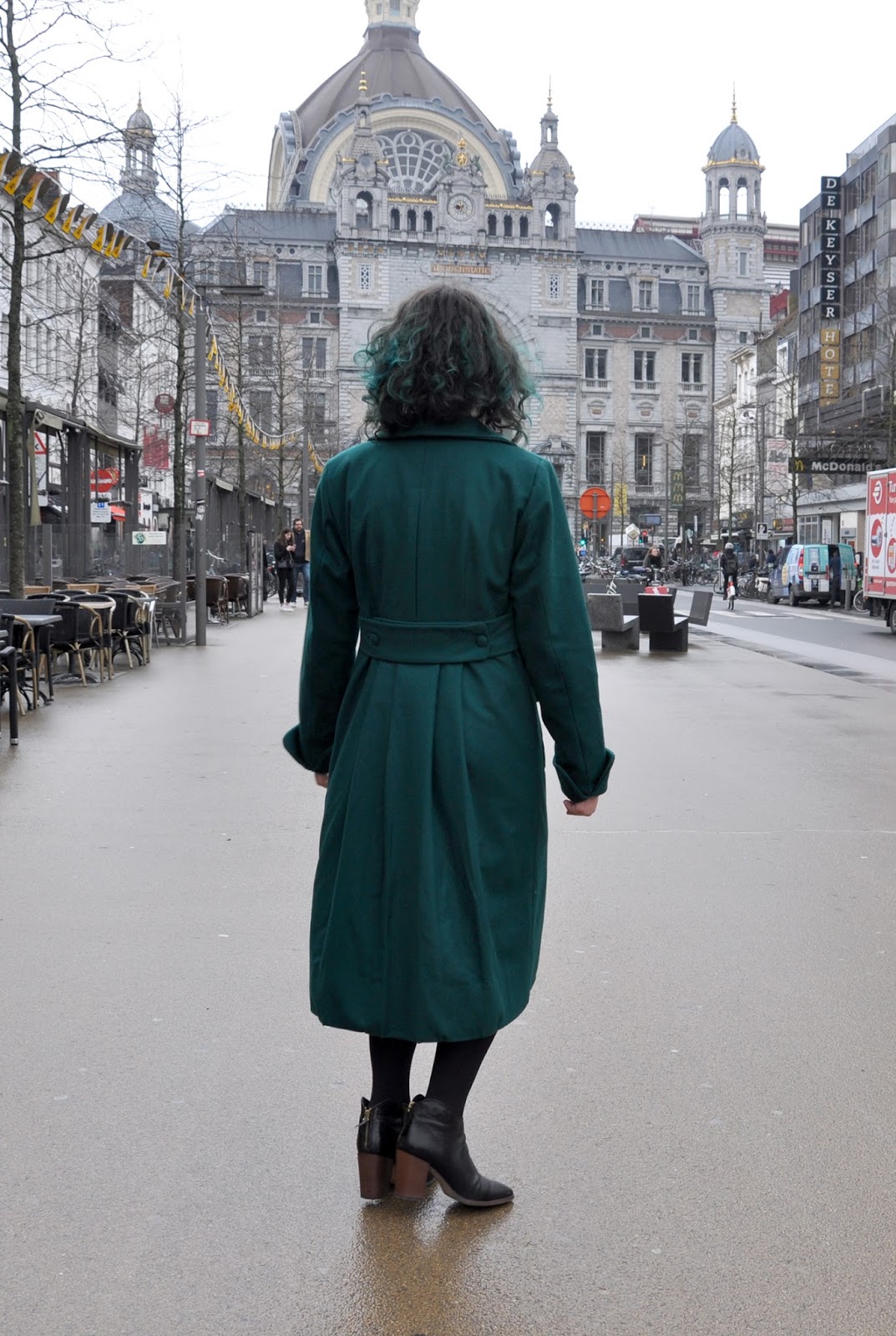 My favourite part of this coat is the back. I overlapped those belt pieces as far as I could get away with to cinch in the waist a bit more, and I just love the dramatic pleat action going on here! We tried to capture the look of that back in action, and I made some gifs out of that for your entertainment:

So by now the body of the coat had been assembled and I tackled the lining. I assembled the front lining pieces and facing first, since I wanted to make an inside pocket and didn't want to maneuver the entire lining under my sewing machine. The lining colour is almost impossible to photograph but it's a very dark aubergine colour, which was the best colour I could find (that wasn't boring navy blue). 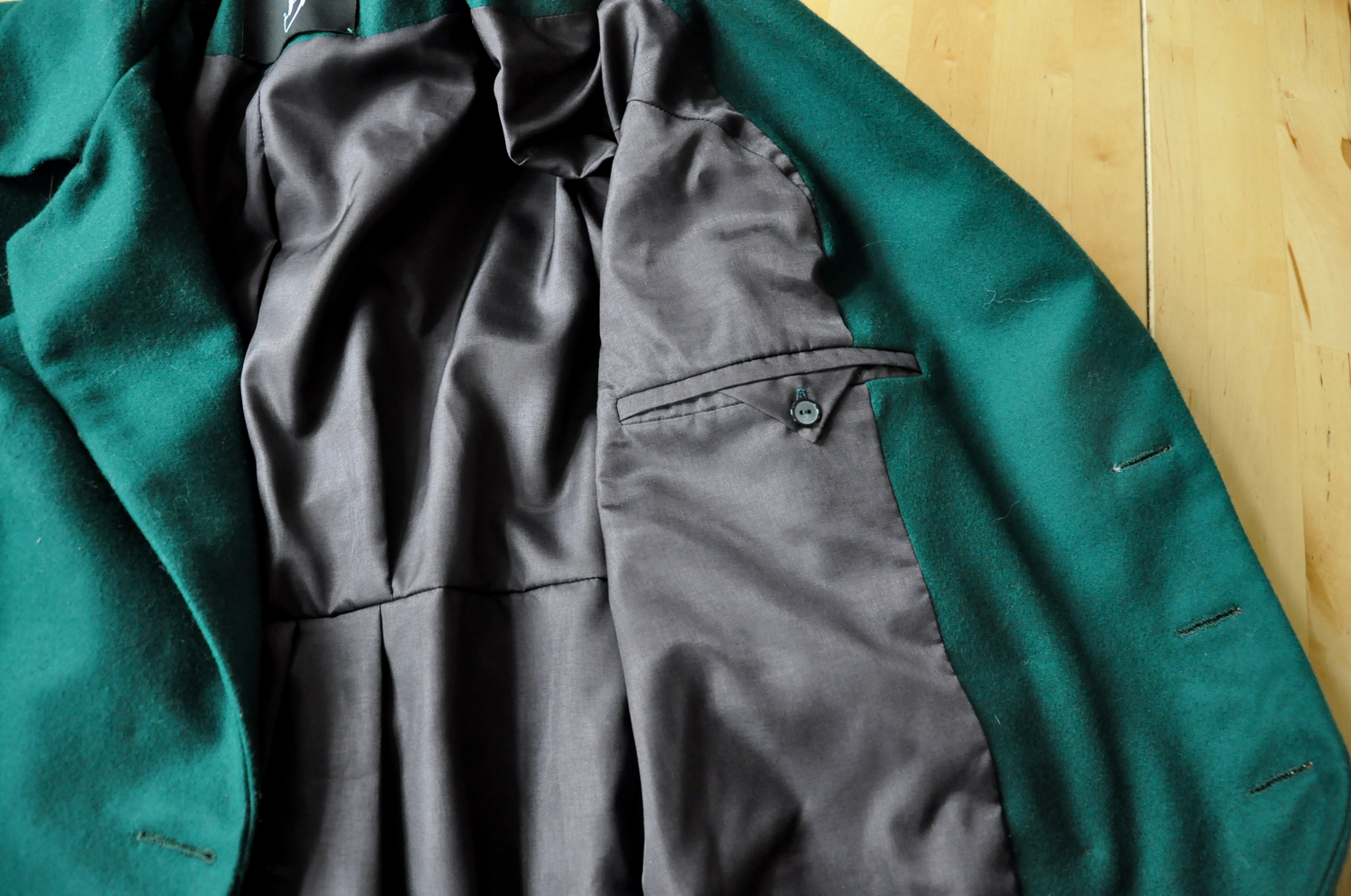 Next came putting everything together! I basted the collar in place and attached the lining and facing, using a million pins and loads of basting.  I stitched all around the coat, sandwiching the collar between the two layers, and stitched the facing to the coat at the hem length. This was all carefully trimmed and graded before I turned the whole thing right side out and gave it a good press. Again, I went for no visible topstitching, so I used basting stitched to keep all the layers in place until everything was finished. The rest of the hem was turned up and hand stitched so it would be invisible, then the lining hem was attached by hand. Whew! 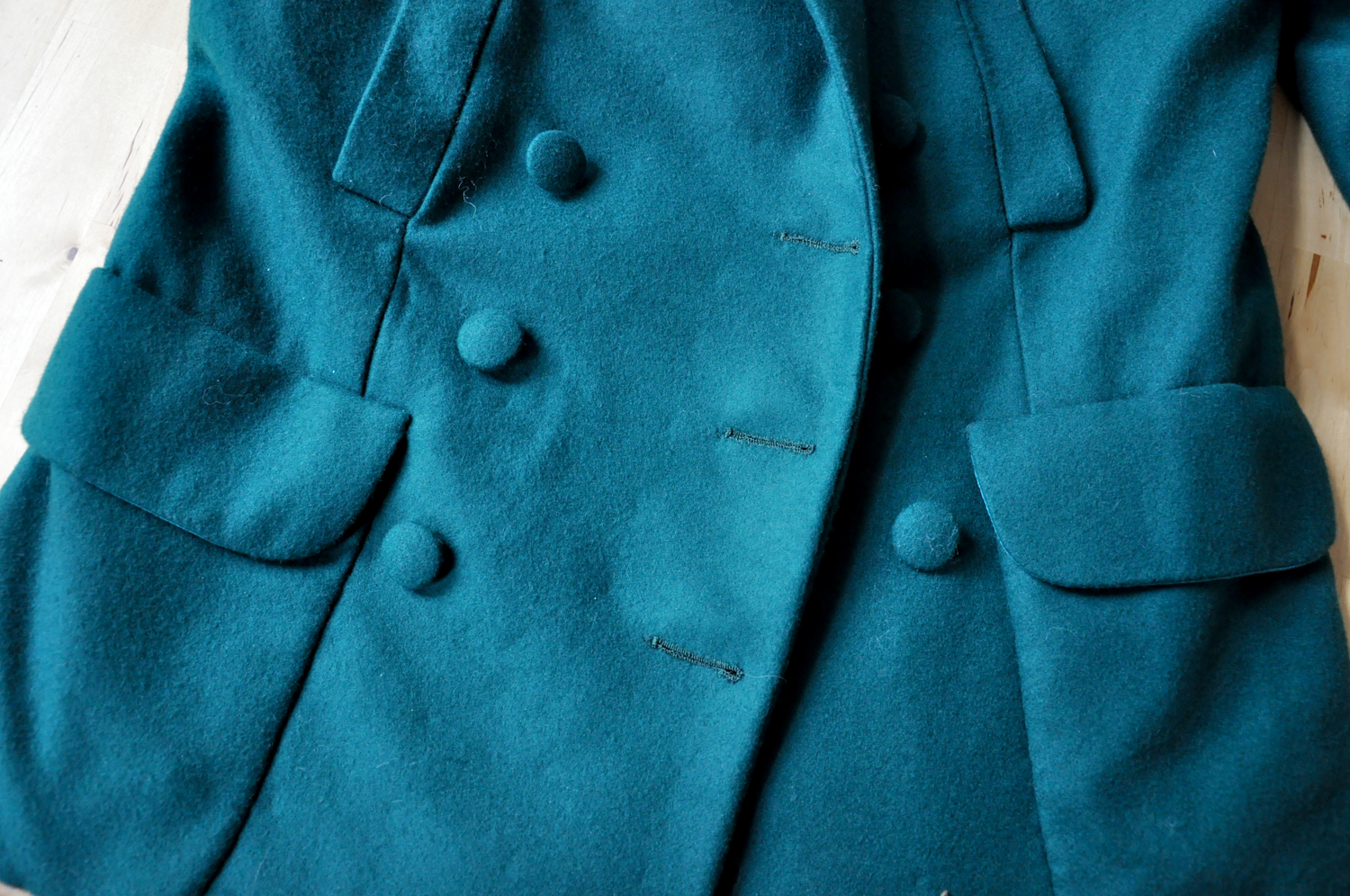 Now came one of the scariest parts: buttonholes. My machine does a VERY basic four-step buttonhole, and I knew that would just look terrible after all this work. So instead I tried to make hand worked buttonholes. I spent two days practicing on scraps of wool and canvas (layered to mimic the actual coat), using contrasting thread to see my mistakes. I was also too cheap to pay the shipping for one roll of gimp in a colour I'd likely never use again, so I used my buttonhole twist to make my own. My buttonholes are far from perfect, but I started with the least visible ones in the back and by the time I got to the front they were looking okay (from a distance)!

There was, however, another minor setback at this point. It was a mistake in the pattern (which has now been fixed) but I could have picked up on it WAY sooner. Basically, the patch pocket placement is indicated on the side front only, which meant that it wasn't immediately obvious that the buttons would overlap the patch pocket. And of course, I never indicated the patch pockets on my muslin. ARGH. I ended up carefully unpicking and reattaching both patch pockets and pocket flaps to move them to the side a bit, and thankfully the earlier stitching and pressing hasn't done too much damage to the fabric. After this I could finally attach my buttons (which I had covered through the shop I work at, 10/10 would recommend) and add the finishing touch: 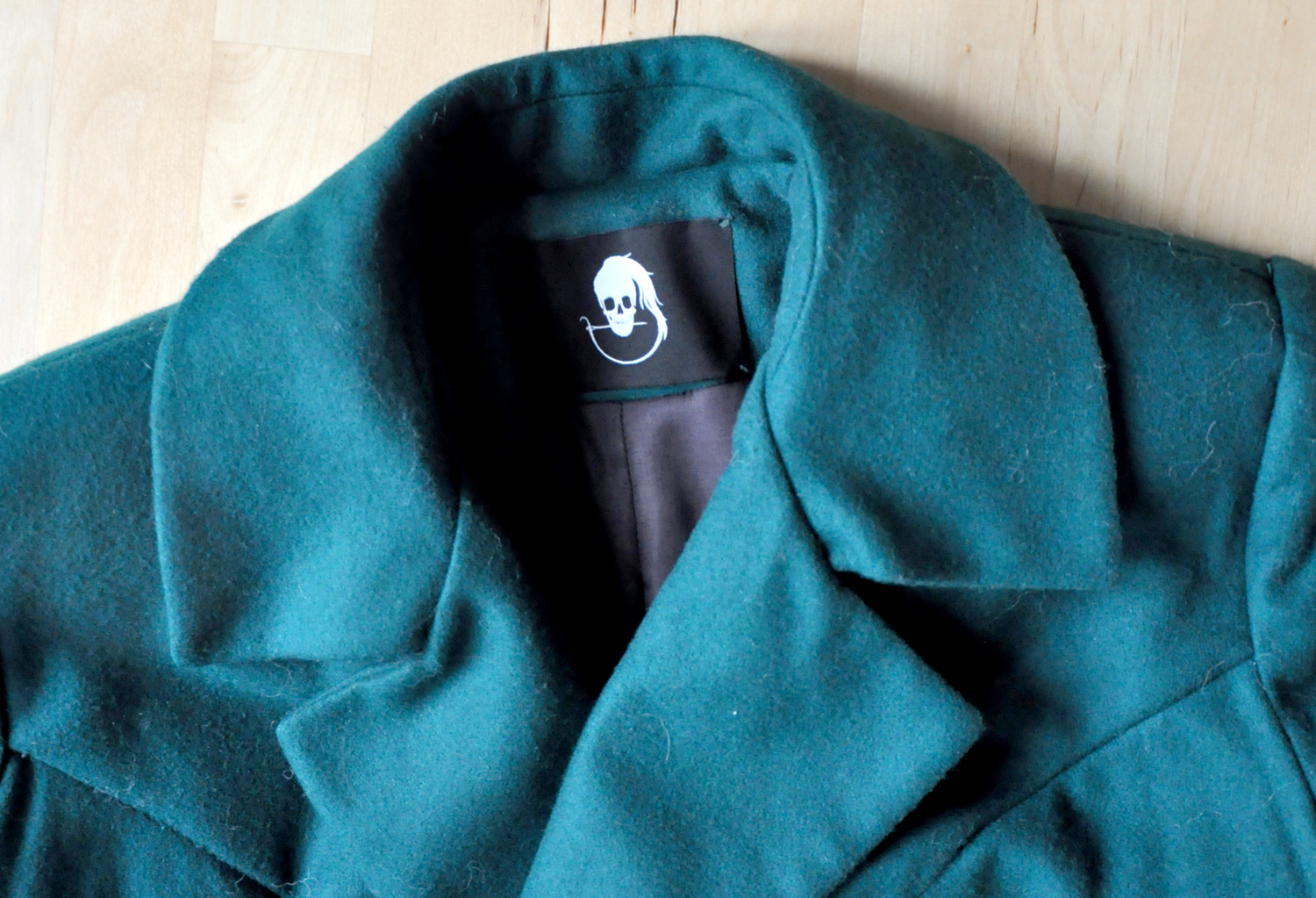 This was probably one of the most ambitious things I ever did, and a very steep learning curve. I can definitely see myself delving more into tailoring, it was scary as hell but also very fun! 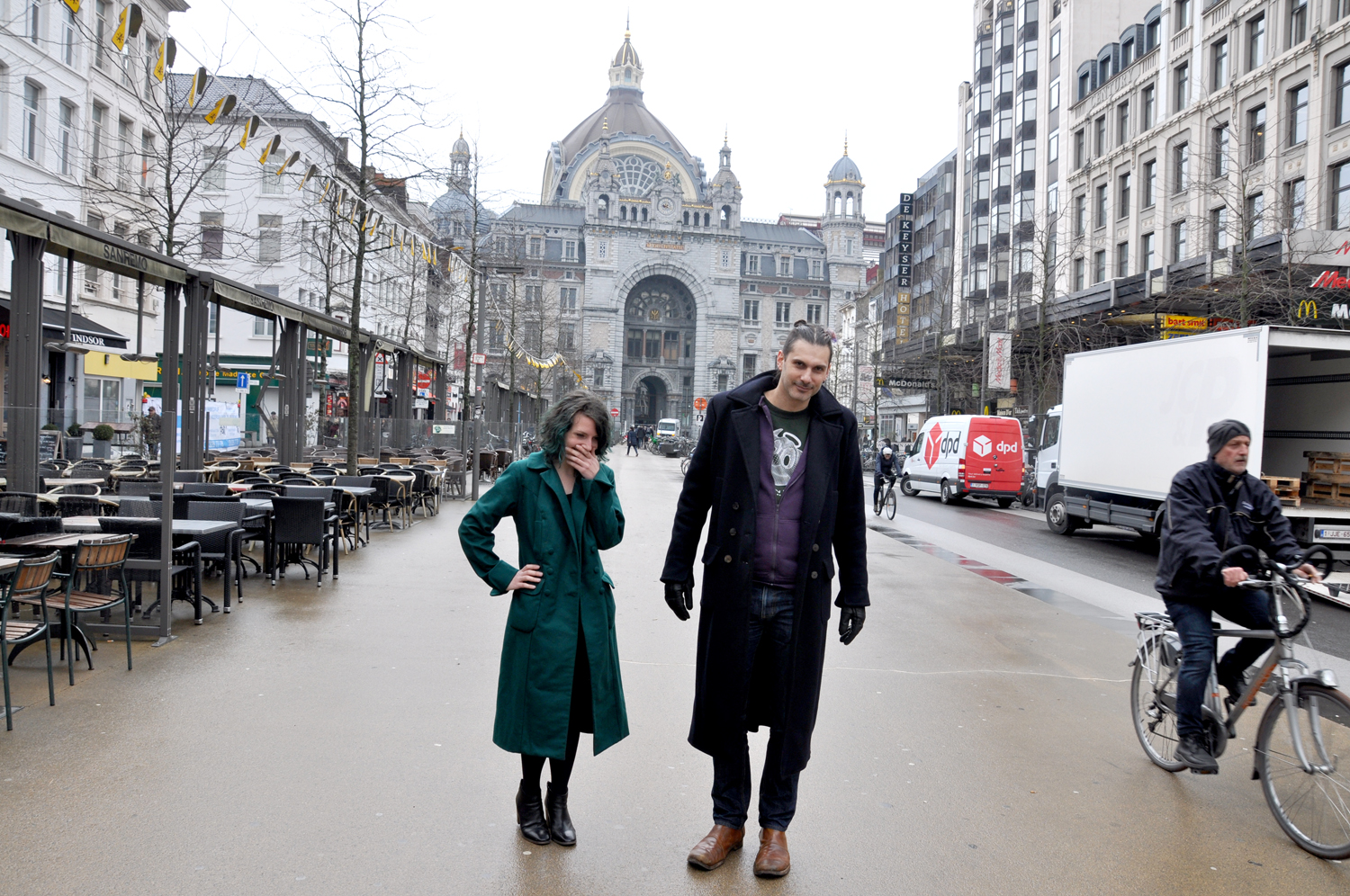 I'm going to end this with a very very big thank you to Joost, for his help with the pattern and his eternal patience with my countless questions/panicky e-mails/crappy muslin pictures. Go follow what he does if you aren't already, because it will definitely be awesome.
Gepost door Anneke op 09:35