Triangles Are My Favourite Shape

(I'm not entirely sure about that but it sounds good)

Summer has definitely arrived here, and I try to get away with wearing as little as possible to stay comfortable. I recently discovered that a whole lot of my summer clothes from last year don't fit anymore, so I've been planning some lightweight sewing. At the top of the list was a breezy cotton summer dress:

I had this fabric in my stash for a long time, it came from Pauwels (where I also bought the fabric for this other strappy summer dress. Hey, if it works...). I had intended to make a playsuit out of it, but thought a dress might get more wear. I'm very particular in what length of shorts I want to wear (basically, they have to be quite short or I'll feel really stocky and frumpy) but I'll often lack the confidence to have that much leg on show, so a slightly longer dress will definitely get worn more often. Does that make sense?

The pattern is a simple one, and I drafted it myself, starting from my bodice block. I rotated the side bust darts out to the waist darts and evened out the bottom so I could just gather it for a dartless bodice. The neckline was eyeballed and took two tries to get it right (the first attempt was too low in the back to fully cover my bra band and too narrow in the front).

The gathered bodice is attached to a straight waistband, which has a gathered skirt attached onto it. I had limited yardage (end of the bolt so not my fault for once) and cut everything on the cross grain because I liked the print more with the stripes running horizontally. The skirt is two gathered rectangles, not super voluminous (because not that much fabric) so it's a bit narrower and more tulip-shaped than usual. I was a bit worried that there would be too much gathering all around and that the top part would get super blousy, so I was very careful about the length of the bodice! 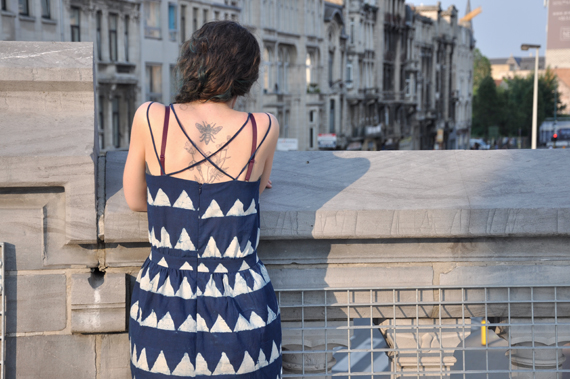 Try to ignore the mismatched stripes on the back bodice and look at the strap action going on here! Some people might call this a dress that is not 'bra friendly' but I don't actually mind visible bra straps- as long as the bra itself is covered. (what is the problem anyway? People will know that- gasp!- I'm wearing underwear?). The straps are narrow tubes of fabric, and getting them right took some work. The neckline of the dress is finished with a facing (I thought about lining it but it might have gotten too bulky with all the gathering and just too WARM) and I sandwiched the straps between shell and facing at the front only. I then tried it on, pinned everything in place and hand-stitched the straps down. The outer ones still kind of fall off my shoulders (as seen in these pictures) but I think I'll leave it or they might get too tight.

I really like the shape of this neckline and will probable make another version as a top... There is some silk lurking in my stash that would be perfect.
Gepost door Anneke op 01:47