I Was Born This Way. And By That, I Mean Tired.

I have a small problem with sleeping. As in, I'm not very good at it. Especially the falling asleep part. On normal days it takes me at least an hour, on bad days... Let's just say that on bad days I'm happy to get three hours.

This means that I often feel a bit tired during the day. So instead of trying to fix the problem I just made a t-shirt that says 'BORN TIRED'. There! Done!

Joost and I try to meet once a week to work on a slightly nerdy project, so I asked him to take pictures of my new t-shirt before we got started. He was obviously very enthusiastic and could hardly wait:

So yes, I made a black cotton t-shirt. Here it is: 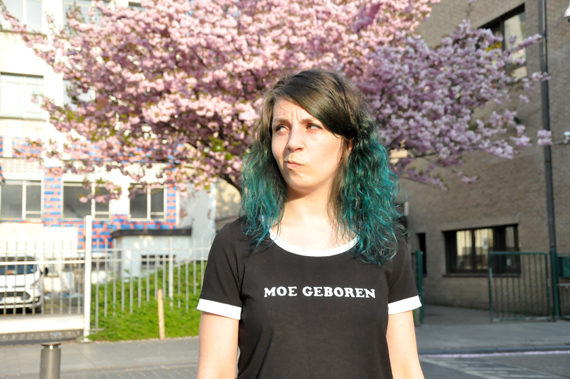 I used a plain black cotton jersey I got at Stoff & Stil during my trip to Berlin. It might seem like a pretty dull fabric to buy on a trip, but I had a very clear idea of what I wanted this shirt to look like (not too drapey so viscose jersey was a no), my local fabric shop had no black cotton jersey and then I found this and just thought it was meant to be. The white is plain white ribbing, which I did buy in Belgium.

The pattern is the Sewaholic Renfrew, a classic I've had in my possession for ages and never made. I still haven't made it as is though, since I changed a few things! 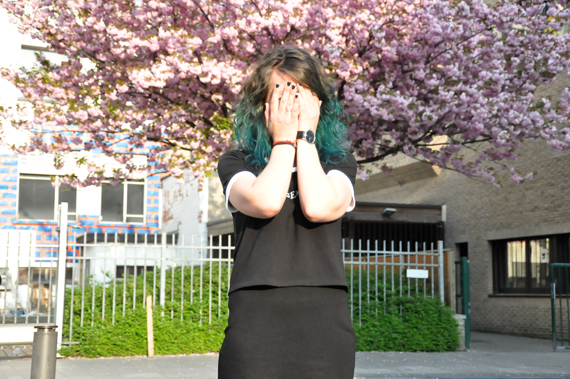 The most notable change is that I shortened the t-shirt a bit. It's not a proper crop top since it's still lower than my natural waist, but it's a bit shorter than most of my storebought tees, which looks better with this type of skirt in my opinion. I also straightened the side seams for a boxier silhouette. 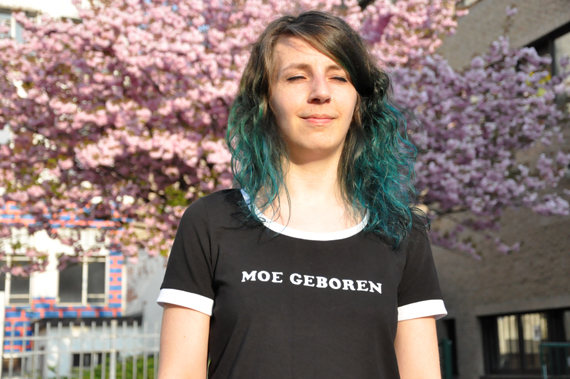 I'm glad to have finally made this pattern, it's a really well-drafted basic! The hardest part about this t-shirt was the letters. I spent a day thinking about what font to use, decided on Cooper Black (the same as the 'Vote for Pedro' shirt in Napoleon Dynamite!) and then spent an hour painting the letters on (with tiny brushes and some patience).

I already fell asleep wearing this once so it's a success in more than one way! Something tells me it'll be perfectly appropriate for work as well.
Gepost door Anneke op 13:40