I got a comment from Lisa over at Small Things saying she gave me a Liebster Award! I have to admit I had to go and see what it was since I'd never heard of it before, but I love the idea behind it! It's an award especially for smaller blogs with little following and give them some exposure. I'm honoured!

I'm supposed to answer eleven questions and then pass the award on to eleven other bloggers I like.  So let's do this!

A bit about you - where are you from and do you have a favorite local sewing store? Can I come visit? (Ok, you don't have to answer that last part.)

I live in Antwerp, Belgium and have lived there for most of my life. Although Antwerp is considered a fashion city it's not an amazing place for fabric shopping. There are a few very cheap stores and a few very expensive ones, but nothing too spectacular imho... There is a large outlet half an hour outside of town where I go for cheap cottons to line dresses with, but their selection varies all the time and their prints aren't that great. However, twice a year a few designers have stock sales of their past clothing collections and fabrics, and I usually score some nice things there!

How do you choose your fabrics? Do you go with what catches your eye? Have something in mind when you go? Or shop for certain fabric weights or colors?

This really varies. Sometimes I find a fabric that I really like and I'll just buy it and find something to do with it later, sometimes I fall in love with a pattern and start looking for the perfect fabric. My sewing time is a bit limited so by the time I get around to making the garment the idea probably changed a few times! I have fabrics that were meant for three different things before I settled on a final choice.

Are you a cautious, measure-twice-cut-once type of sewist or are you the throw-it-up-on-the-dress-form, make-it-up-as-you-go type of girl?

I try to be a bit less of the latter... As I said before, sewing time is limited so it's tempting to just forget about muslins and dive in head first. But my body does have its quirks and there are certain adjustments I usually have to make, especially with form-fitting garments. So I try to make a muslin as often as possible, even if they are being sewn together rather haphazardly!

What is your favorite thing you've ever made (show me!).

This dress is probably my favourite make ever. It has its flaws- an invisible zipper that isn't invisible at all, a bodice that's a bit too tight for dinner parties- but I love it so so much. I had been looking at this print for so long, wondering if it would be ok to wear it, and worrying about how it would be ridiculous, but then I just threw all of that overboard and went with it, thinking that as long as I liked it, it would be awesome. I kept working by this philosophy since then and love it. 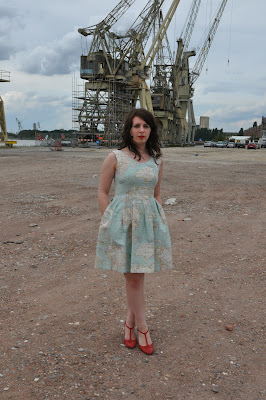 What was the most DISASTROUS thing you've ever made and why? (You don't have to, but of course we'd all like to see that as well!)

I don't have a lot of things that I consider disastrous, since I spend so much time planning and designing a project the final idea usually works anyway. I do have a maxi dress I started working on last summer that sort of lost its appeal. The print just looks frumpy to me now, and I don't really feel like spending time on finishing it. However, I can show you The Ugliest Muslin Ever: 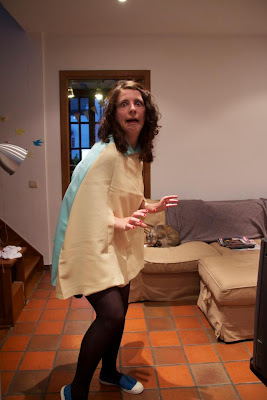 This was going to be a cape and I made a test in some super cheap pastel coloured poly crepe. Ugh!

Do you primarily sew special garments for your wardrobe (dresses, jackets...) or do you try to make everything yourself (underwear, t-shirts...)? How's that going?

I'm not a basics type of gal so I usually sew items that are considered 'special' by others but 'daily' by me. I try to sew things I'd wear regularly, since I'm really not impressed with the quality of ready to wear clothing (that's within my budget). I'm very interested in making underwear, especially bras, but the combination of precision, working with stretch fabrics and math is just a bit too intimidating right now!

Would you say you've found your personal style? Or do your tastes constantly evolve so that what you made last year doesn't work for you any more? Any tips on that front?

My personal style has evolved a bit over the past few years, and I feel like I'm finally wearing what I really want to be wearing. I've tried dressing vintage for a while but found it too restrictive, and at this moment my style is just defined by: 'If I like it, I'll wear it'. I now sort of know what patterns and shapes work for me, and what I will like to wear. It doesn't make sense to spend hours slaving away on pants when you rarely wear anything but skirts, right? It's hard to predict the future and know what you'll like in two years time, but I am wary of pieces that are too clearly 'trendy' and might look super dated soon.


What decade other than now most closely inspires your (current) personal style?

I love the fifties/early sixties for the shapes and patterns, but find that many of those clothes make me look frumpy and older than I really am (especially the higher necklines). I like some seventies silhouettes as well, minus all the brown and orange. So basically I'm taking the general shapes of things I like and mix them with contemporary things and prints.

Have you ever sewn for others? Did they appreciate it? Did it fit?

I have to refer to the Dress of Shame here. Part of me wants to be that nice person who provides everyone around her with beautiful handmade clothes, but the reality is that I barely get around to making my own ideas, and on such a tight schedule my inner Selfish Seamstress kicks in. I promised I'd make my boyfriend a shirt AGES ago, even bought the fabric, and it still hasn't happened.

What is your day job/day-to-day life like? Are you an all-around creative or is this your artistic outlet?

I currently study illustration and comics, and work as an illustrator from time to time. This also explains my limited sewing time: I don't have specific work hours, and sometimes there will be weeks of not being able to do anything but illustration work. This is also one of the reasons I don't like to sew for others: I already have had a creative outlet turn into a job and would like to keep this one free of pressure! I sew for my own enjoyment, and because I happen to end up with wearable clothing afterwards. 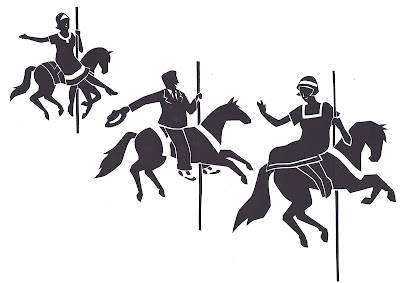 I know all your friends are telling you to get into the sewing business. Do you ever have aspirations to start your own handmade-related venture?

For aforementioned reasons: not right now. It's something I'm doing for fun,  and I don't consider myself professional and wise enough to do anything else with it. I do like combining my illustration work with sewing though: I've been selling fabric designs on Spoonflower and find this an interesting thing to do. My final project for this year is a comic strip about a young seamstress, incorporating techniques I've learnt. So I think all these little things will eventually mix anyway!

Phew! That was fun. Now for the hard part... Who to nominate? I have to admit most of the sewing blogs I follow are pretty well known, so don't hate me if I don't make it to eleven!

- Een Nieuwe Jurk: a fellow Belgian and super stylish girl... I'm curious about the Macaron she has planned!

- Jo Sews: a British gal living in Brussels. I love her photographs and was amazed by her Briar variation!

- The Botterman Empire: She's a shoemaker. It's awesome. Go look at it. Awesome!

That's it for now, I'm afraid. Everyone else I love has too many followers. But who knows, I might add to this list!