I Sacrificed A Goat For This

Ok, not really. But getting this thing cut out did feel a bit like black magic. See, I had this sudden need for a pair of long black linen dungarees, and thought I had two meters in stash to make it happen. Imagine the infernal screaming that was produced when I discovered it was only a meter and a half, with bits cut away to be used in other projects! I was determined to make it work though, and set up an altar: 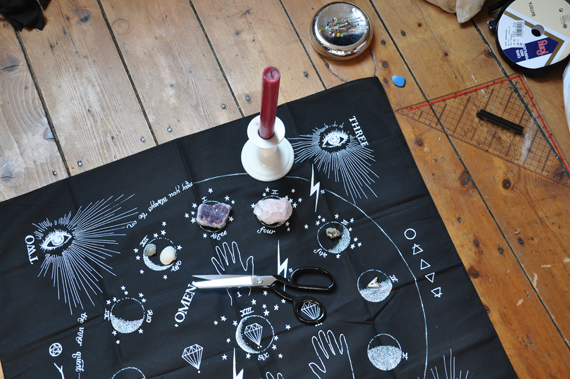 Ok, again, not really. I went rooting through my scraps and found two more tiny pieces of black linen from the same shop, did some crazy pattern tetris (while still managing acceptable pattern placement, grain-wise) and cut the whole thing out. Another fabric yield win! 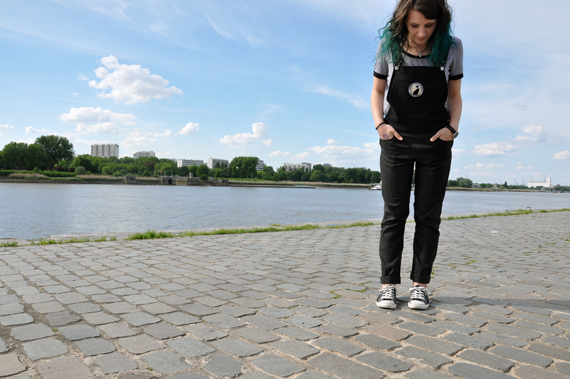 So yeah, linen dungarees. These are exactly the same as my space trashbag pants, only full length instead of shorts (and I also changed the back a bit). I used the Morgan jeans as a base and was a bit worried about how and if these jeans would look in linen, but it turned out fine! I like the first pair of Morgans I made but the non-stretch denim bags out a LOT with wear, and by that I mean that they fit really well right after washing but look like those skater jeans every boy in my school wore when I was fifteen at the end of the day. These have relaxed a bit with wear, but not that much. Phew! 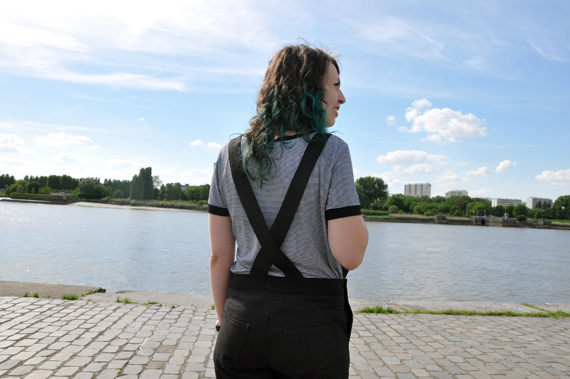 I did one thing differently and that was to forego the back bib, instead making the straps come straight out of the waistband. It took a bit of fiddling to get them in the right position so there wouldn't be any weird pulling, but I think it's a nice variation. 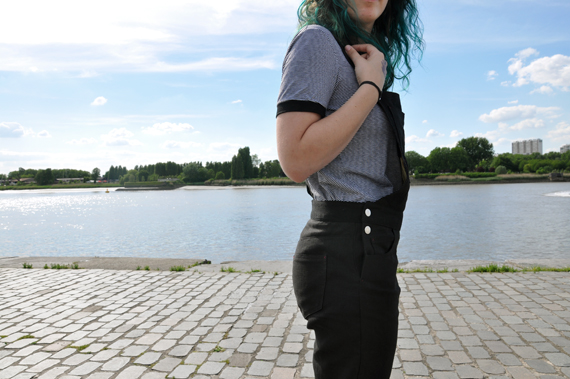 Sewing these is pretty straightforward by now (although I did mess up and sewed the center back seam before attaching the back yoke parts, so there was a bit of cursing and unpicking (top)stitching and stuff. I used the bib pattern from these Knipmode dungarees, which works fine. There's a bit of a weird gape at the side but I can fix that on the next pair (who knows when that will be though). As usual, these close with buttons at the waist, which is a really easy modification to make to a jeans pattern (I can make a sketch if anyone's interested!). 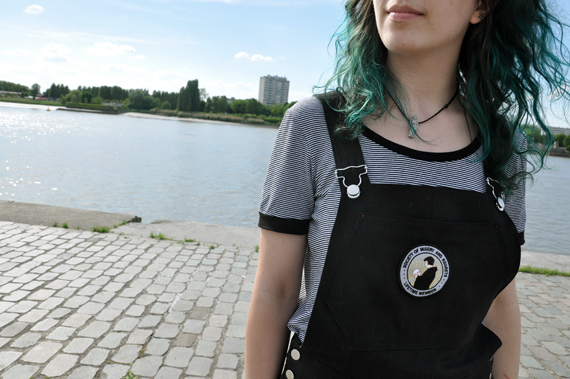 I removed the patch from these short dungarees to put it on these, because it seemed more fitting here. I wore this to go fabric shopping with Hanne and Joost, and then visited Hanne's inlaws to look at dogs and lambs, followed by fries in the sun. This will probably become a wardrobe staple, even if it kind of makes me feel like what a mom in a 90s sitcom or tv movie would look like if she was painting cabinets or something, but in a good way. Does that make sense?

Someone asked for a tutorial, so here it is!

- Interface both the facing and extension piece

- Before sewing the side seams, fold the extension in half with right sides together. Sew the bottom closed and turn right side out.

- Sew the facing and extension pieces on the front and back leg pieces with right sides together. I use a slightly smaller seam allowance so the seam won't be visible on the outside.

- Press both pieces away from the front and back legs and sew the side seam, being careful not to catch the facing or extension in the seam.

- Fold the facing under, press. You can add a bar tack through all layers at the bottom of the opening to keep the facing and extension in place.

- Attach front and back waistbands like you normally would.