So, as you all know by now, I went on a bit of a shopping spree in the New York garment district. One of the fabrics I got was a white and blue Ikat, which I then turned into a dress: 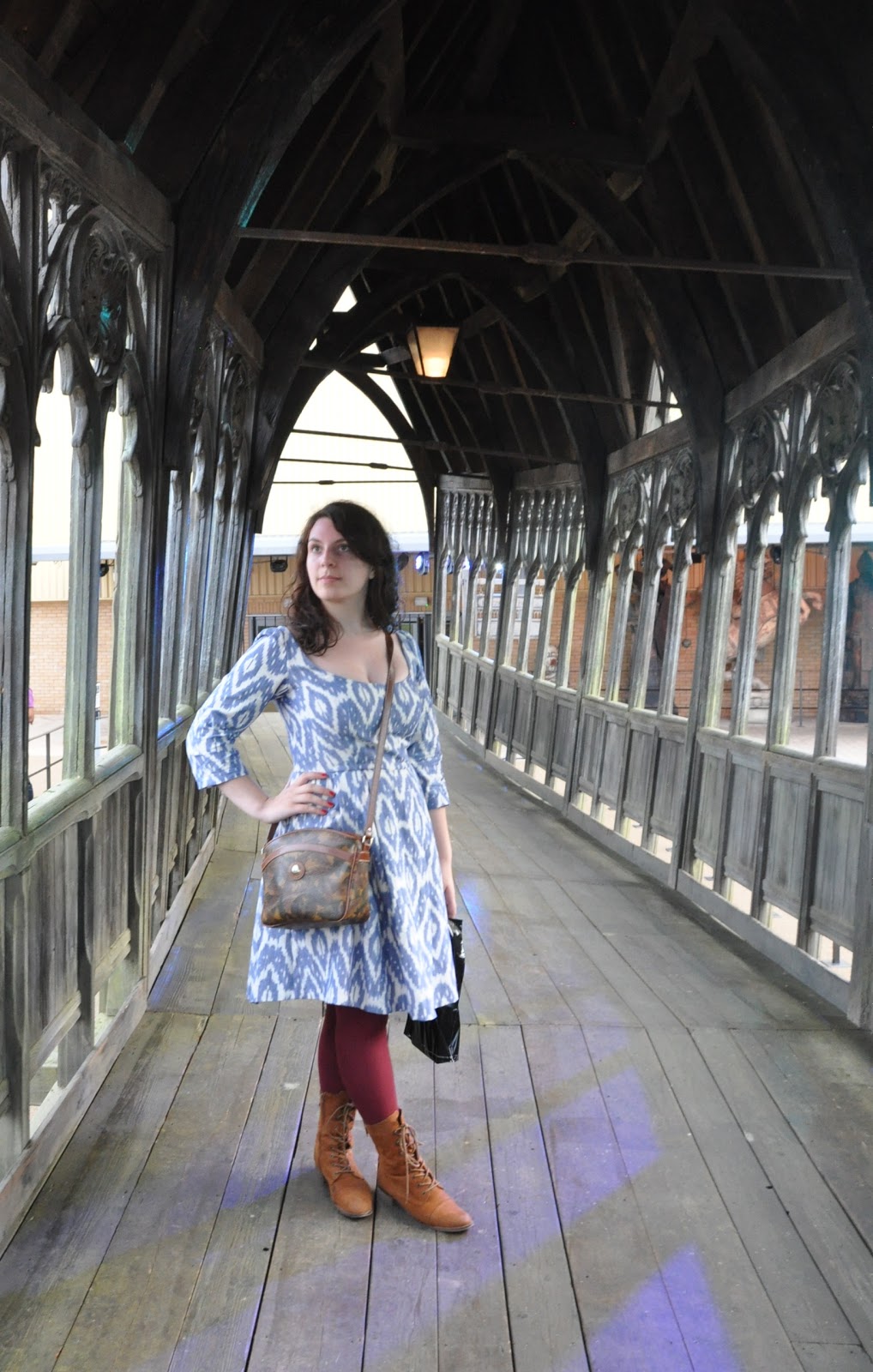 (On a side note: can you tell where I am? The boyfriend and me went on a long weekend to London at the end of September and took some time to visit the Harry Potter studio tour. It was awesome. These pictures are taken on the wooden bridge that first appears in Prisoner of Azkaban and gets blown up in Deathly Hallows part 2)

It's a self-drafted pattern, starting from my bodice sloper. I lowered the neckline (a bit too much I'm afraid, it's a lot more cleavage than what I'm used to!) and added 3/4-length sleeves and a skirt. 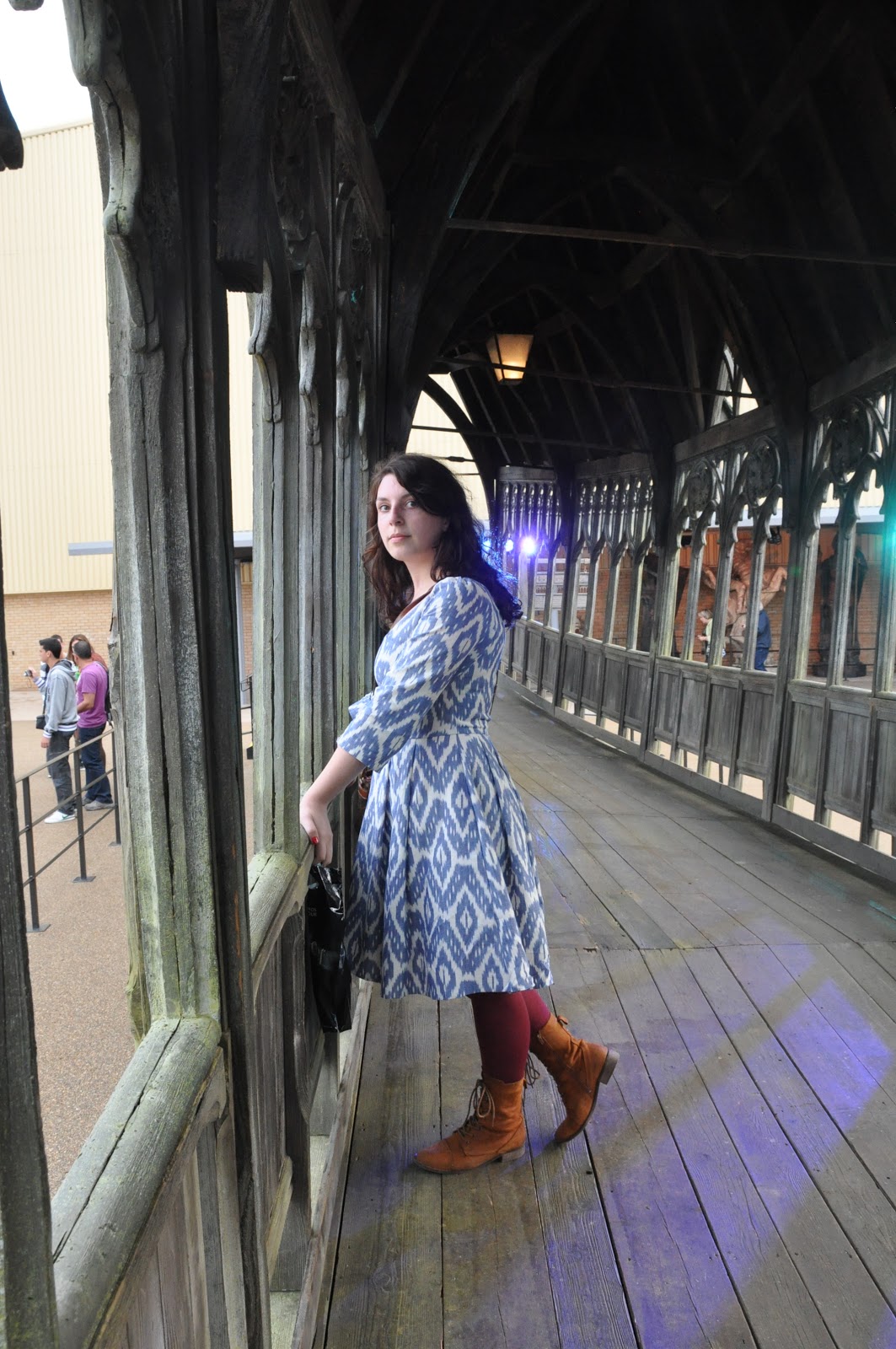 The skirt has eight pleats in total, four in the front and four in the back. I didn't want to go for pleats all over since I didn't have enough fabric and felt like the pattern didn't need all the extra volume.

The fabric was quite nice to work with. it's definitely not too slippery so it doesn't shift at all, but it's quite a loose weave so if you don't handle it quick enough it just frays away right in front of you. I bound all my seams and lined the entire dress in a cotton voile. 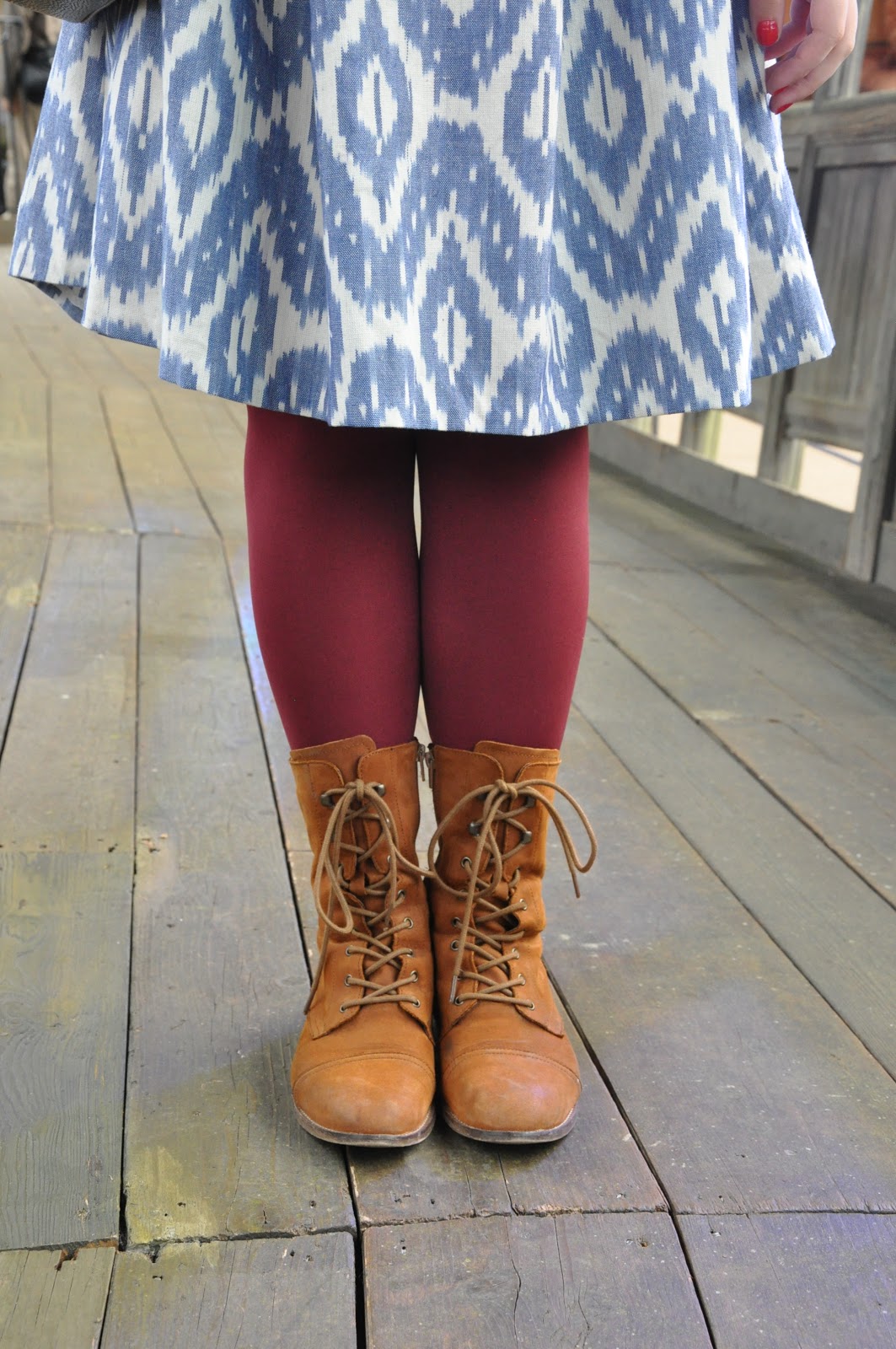 (the hem isn't uneven by the way, it's just my bag hiking half of the skirt up a bit)

I love how the hem turned out, it's really quite invisible. Because of the looser weave it wasn't that hard to pick up just one thread from the fabric!

I really like this dress, and maybe if I found something to wear underneath it so the neckline is a bit more modest, it could become a staple!
Gepost door Anneke op 13:39 Geen opmerkingen:

Anatomy of a Dress 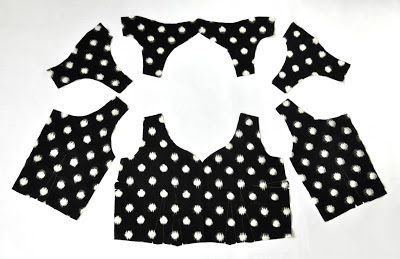 Bodice front and back with unstitched darts / facings. 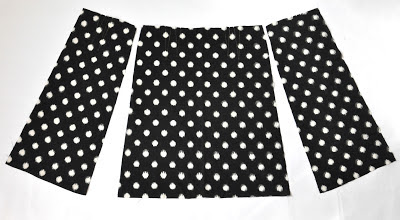 Skirt front and back with unstitched darts. 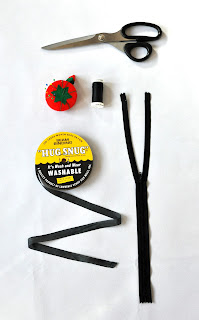 The pattern is the sultry sheath from Gertie's New Book for Better Sewing, which I've dubbed the Breakfast Dress for an unknown reason. (I'll be reviewing the book soon!)
Gepost door Anneke op 03:10 Geen opmerkingen:

While in New York, I picked up a load of felt in different colors. For some reason I can't find real wool felt at a reasonable price here, and most large craft stores only sell a synthetic version that looks and feels quite cheap (shiny!)

Back home I decided to turn some of this felt into patches, by cutting out shapes and adding details with embroidery floss. This is the result: 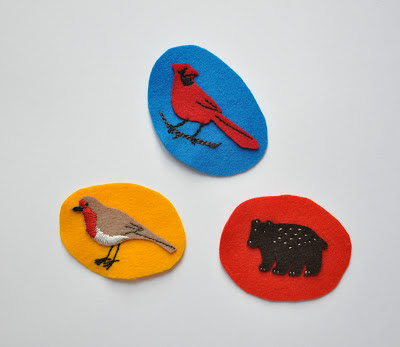 I really like how they came out and immediately made a little fox to be my autumn mascot: 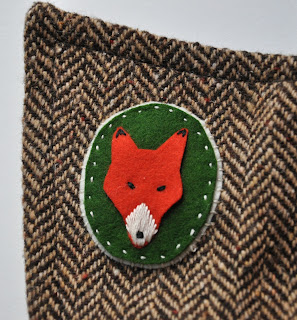 After posting these on facebook a few people asked me if they were for sale. So now I have decided to make them available! The patches are between 7 and 8 centimeters at their widest point and cost 8 euros + shipping. I can make a custom design for you if you want. Contact me at annekecaramin(at)hotmail.com for more information!
Gepost door Anneke op 04:47 Geen opmerkingen:

Clothesline on the Highline

I thought about buying the fabric for this dress for a long time. My main concern was that I'd be too old to get away with it. But then I looked at the print again and thought "oh hell no, 23 is definitely not too old to wear a clothesline print!" 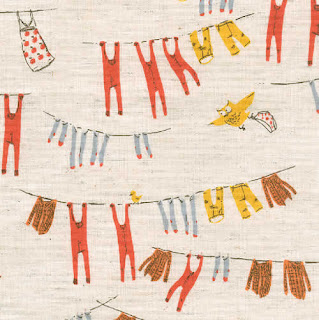 So I bought it. And made it into a shirtwaist dress with a pleated skirt using this pattern: 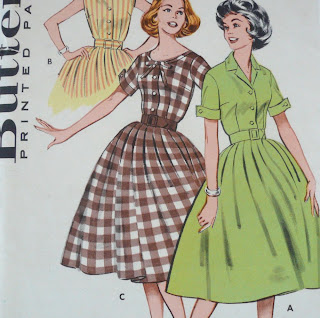 And then I took the dress with me to New York and took a few pictures at the Highline Park: 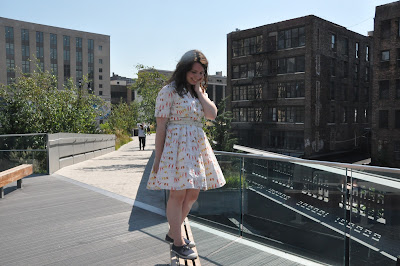 The verdict? I love it. The fit on the bodice could have been a bit better in the shoulder area, but everything else about it is great. I did have some issues with the pattern though, the facings just wouldn't lie flat on the inside, but I'm not sure if that's because of a mistake I've made or because of a mistake in the pattern... 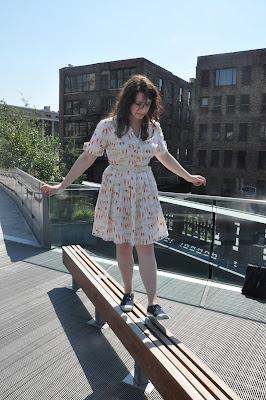 The dress is unlined and the fabric is pretty lightweight with some body to it, so it's perfect for warmer days, even if it had sleeves. I'm planning to make a second version of this in a lightweight chambray and give it a gored skirt instead of a pleated one. 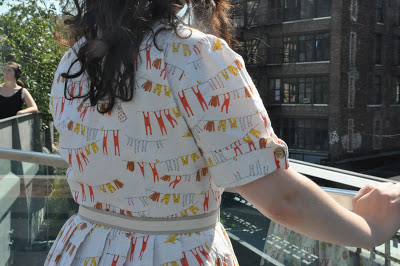 Let's face it: you're never too old for clotheslines and underwear-stealing owls. 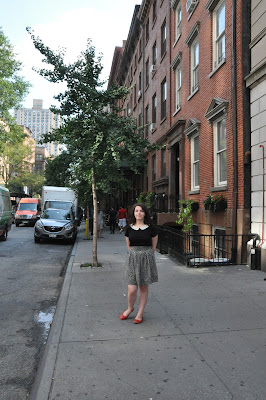 This is the first clothing item we photographed in New York, and sadly, we completely forgot to take any close-ups. You'll just have to believe me when I describe the details to you!

I found the fabric for this skirt at my usual fabric place ( a factory outlet outside town, they mostly stock boring/ugly prints and loads of synthetics but sometimes a few gems pop up). It's a rather drapey cotton with a black and white graphic print, and I loved it immediately. 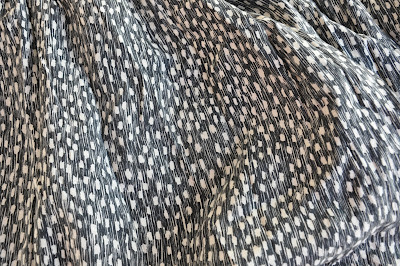 (this is a close-up of the print I took at home, when I realised this was going to be a one-picture post)

I underlined the fabric with a navy cotton to give it some body, and drafted a very quick waistband pattern. The waistband has a slight curve, making it a bit higher in the front, and the skirt itself is just your average gathered skirt.

It's a very comfortable piece, but the waistband has that old wrinkling problem lots of waistbands interfaced with the regular iron-on interfacing seem to have... It develops these deep wrinkles during wear, and I usually press the waistband of this skirt before I wear it. I've started to interface my waistbands with hair canvas and this seems to work better.
Gepost door Anneke op 04:00 Geen opmerkingen: 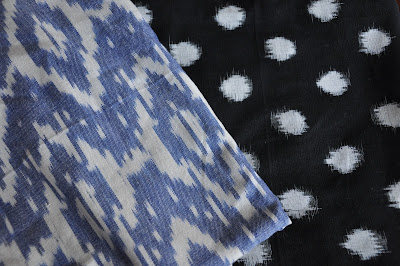 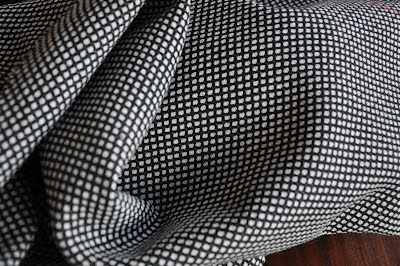 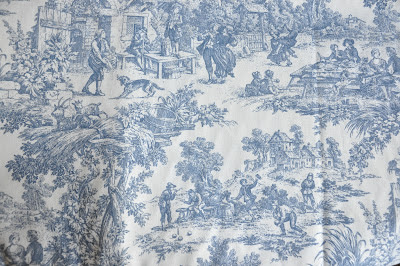 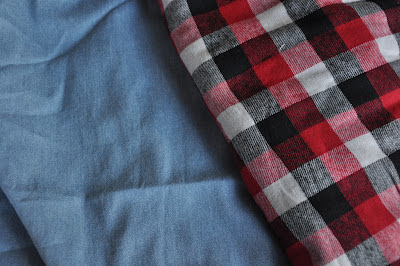 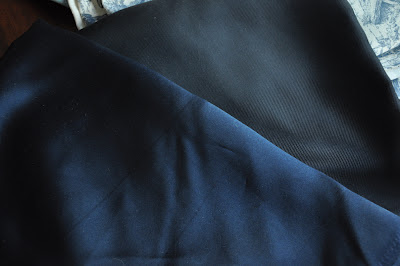 Handmade in Manhattan: the Bicycle Dress

First I want to apologize for the long silence. I went on a two-week vacation to New York and left for a long weekend in London almost immediately afterwards, so there was little time for writing blog posts! I felt terribly spoiled for spending so much time travelling, but I truly enjoyed every single minute of it.

We had around twelve days in New York, and could really take our time exploring the city. It was my first time here and I loved it, even though it was very overwhelming the first few days. On our second day we took a train to Coney Island to visit Marie Roberts, an amazing artist and overall great person whose family history has been tied to Coney Island since forever. She showed us around in her studio and took some time to chat, after which we went out to enjoy the great weather and see some sights.

I happened to be wearing an undocumented dress at the time, so when we reached the boardwalk we decided to take a few pictures. The wind was blowing like crazy, but a few pictures did come out ok! 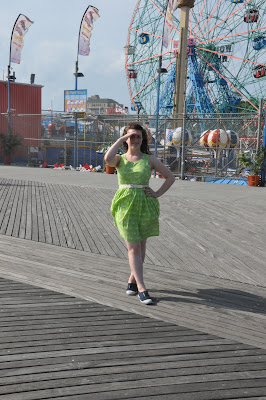 This dress is a bit special to me, as I made it with one of my own fabric prints! The design is available on Spoonflower and is one of my personal favourites so far. Both the dress and the print are very simple: the dress has a basic bodice with a gathered skirt and a heart-shaped cutout in the back: 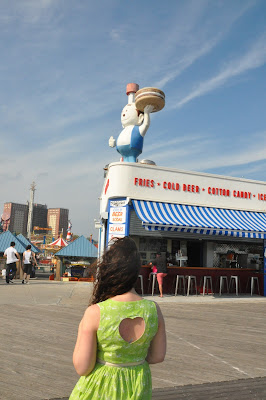 The print started with a small pencil drawing of a bike. I edited it in Photoshop to make it white on a bright green background and voilà! Pretty fabric. It's a very comfortable summer dress, and the wide skirt makes it perfect for riding a bicycle. 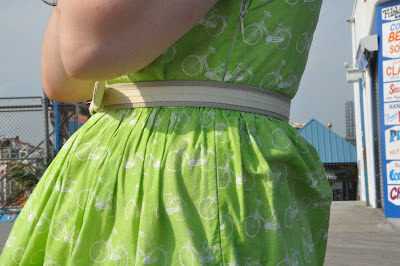 By now this dress has gone back into the closet, waiting for the return of summer. You will get to see a whole lot of summer outfits over the next few days, but I'll definitely mix in some autumn and winter-related topics- there's a big project on the way!
Gepost door Anneke op 13:04 Geen opmerkingen: