I have a small confession to make: I don't do it all on my own. There's a helper. He's called Jakkepoes and even though he looks legitimately pissed off all the time, he's the biggest old sweetheart there is. You have to earn his trust since he's a bit shy, but when he's at ease he'll charm the pants off anyone (even reducing a vet to giggles about 'those little toe fluffs!')

And it's this helper's birthday! So I thought I'd put him in the spotlight. 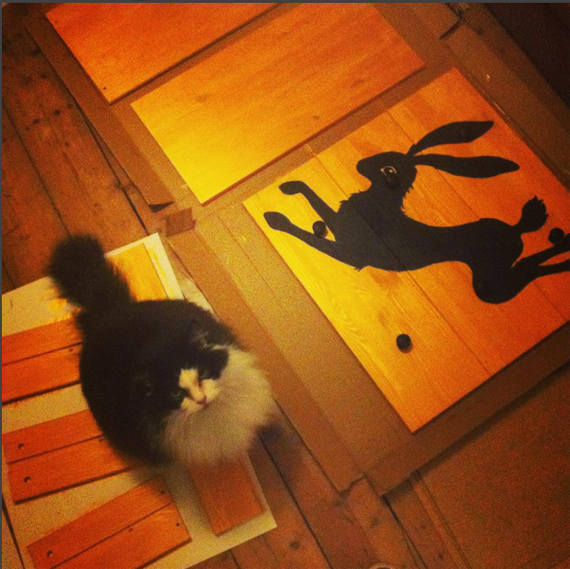 This little guy was born two days before my 10th birthday, meaning that he's now been a part of my life for seventeen years already! He's still very strong and healthy, a bit calmer and stiffer than he used to be of course, but I did see him run around the appartment after a ball of paper just yesterday...

No matter what I'm working on, he's always there to lend a helping hand. Here he is, watching the scraps of my master's project: 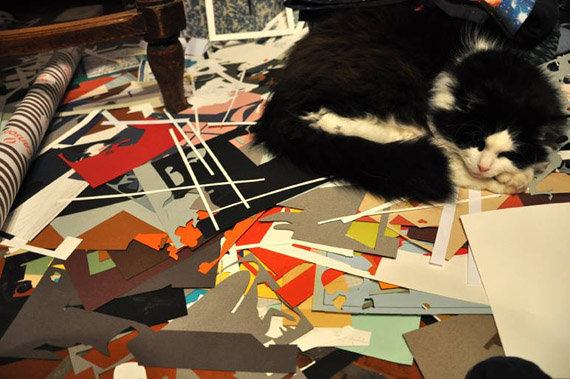 He will also happily guard my sewing notions, even though sitting on small metal things really isn't that comfortable: 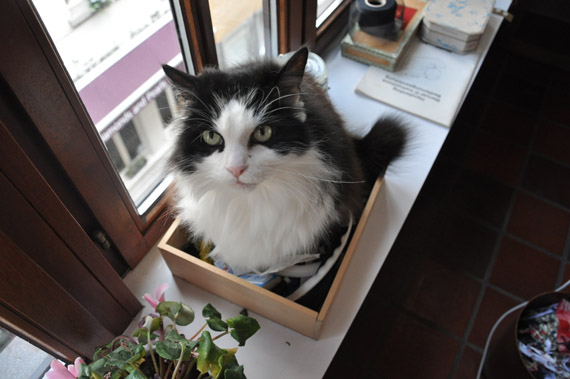 One of his biggest skills is drafting patterns. I'm not sure how exactly he does what he does, but it involves sitting on the paper as soon as it's unrolled. 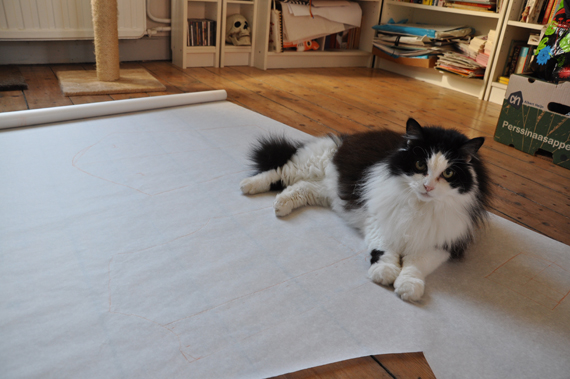 When things get more complicated, rolling around is often the solution. 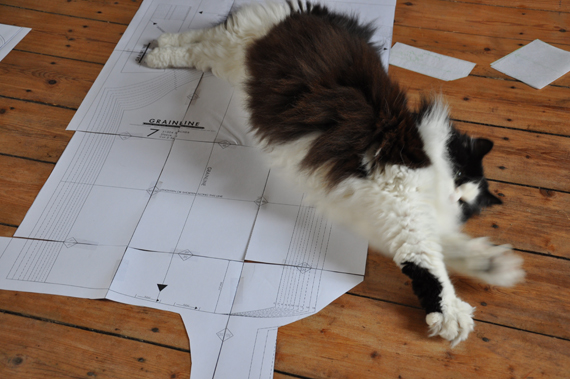 After pattern drafting or tracing it's on to cutting the fabric! Again, I'm getting more help here. 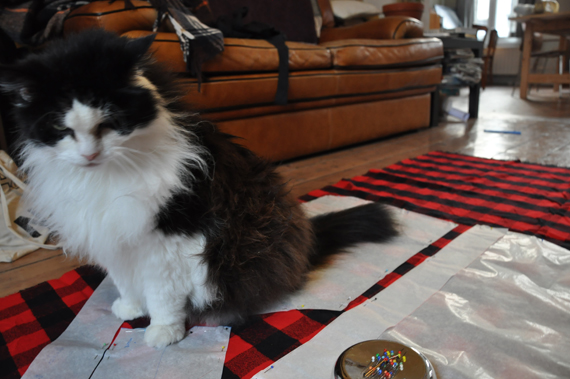 We do sometimes have artistic differences. These mostly involve me picking him up and putting him somewhere else, and him returning immediately. These discussions can get a bit frustrating.

I usually solve situations like that by giving him his own piece of fabric to do with as he wishes. It works for the both of us. 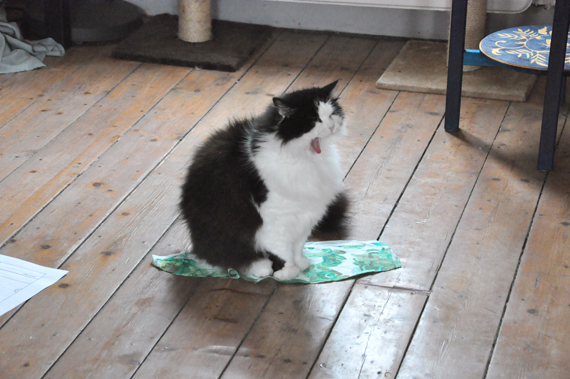 I think we make a really good team, even if he lacks opposable thumbs. Happy birthday little buddy, and keep up the good work!

Please do dance on my grave. Have a party there.

I was complaining to myself about how I didn't have anything to blog about, and then I realised we photographed a dress in London and I forgot to post it. WOOPS. 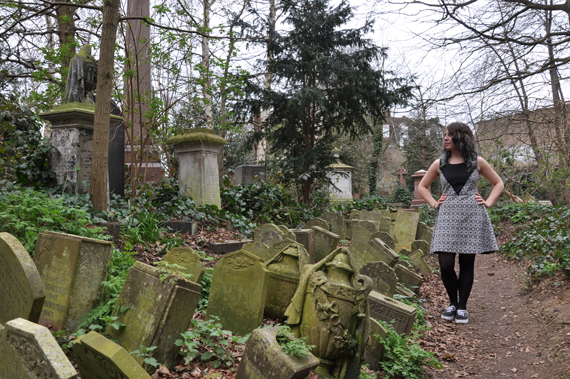 We stayed with our friends Steven and Willemien in Stoke Newington, and on our first day Steven took us to see the cemetery at Abney Park. It was really beautiful, if you're into that sort of thing! I wore a dress I'd made some time before, from a self-drafted pattern. 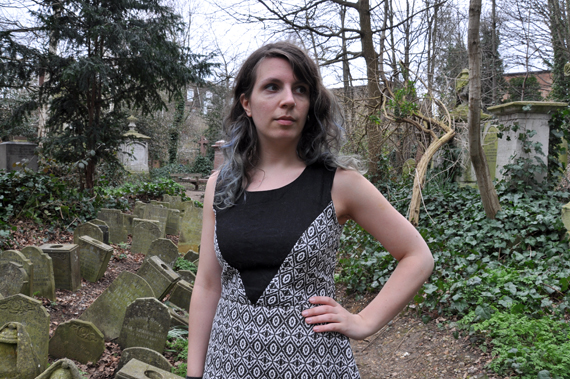 I started with my basic bodice block and rotated the darts to the center front so they would form a V. I then just extended the dart leg closest to the center to get a princess-seamed bodice and did the exact same thing for the back! 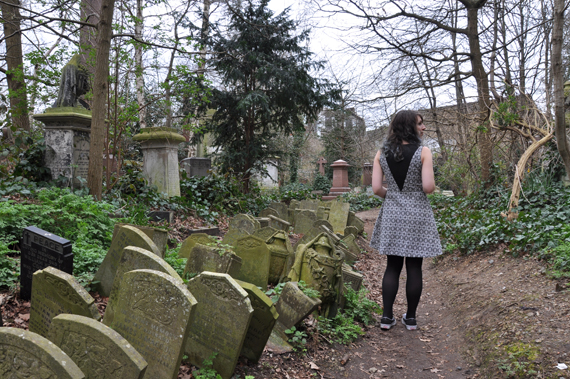 The fabric was pretty stiff and heavy, a polycotton jacquard in black and white. I drafted a sort of semi-circle skirt to go along with it. It has a lot of body, which looks pretty snazzy if I do say so myself! The black contrast panels are just plain linen from the stash. 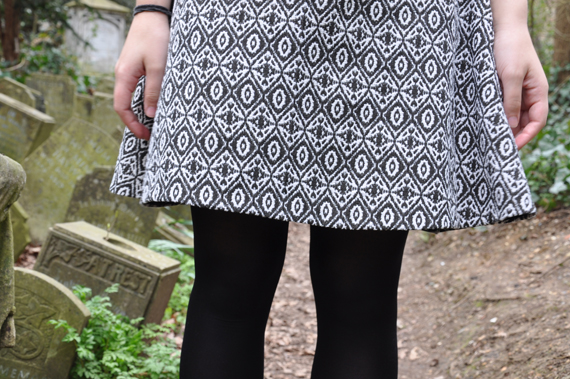 The hem is finished with a bias facing which I handstitched in place. The dress closes with a handpicked side zipper and was a surprisingly quick make, all in all! I drafted the pattern and cut the fabric one afternoon and sewed the dress in one day. I made a few alterations to my bodice block since it was getting roomy, and now it fits really nicely (as long as I stay away from that one Indian vegetarian all-you-can-eat buffet, hmm).

I think this will get lots of wear. It's smart enough with decent shoes and some jewelry, but I can easily dress it down with a hoodie and sneakers. Win!

Next up, if I don't crash and burn on the way there: bathing suits!
Gepost door Anneke op 09:09 Geen opmerkingen: