The Quest For Underthings

I dipped my toes into bra-making a while ago, and made a few very successful Watson bras. After this I tried the Harriet, and after a few attempts I managed to make one that fit fairly well, but it wasn't exactly right yet... I didn't feel confident enough to keep tweaking the pattern, so I put the whole project to the side for a while. My underwear drawer was starting to look pretty sad and worn out though (and I couldn't really justify buying new bras with a box full of supplies at the ready) so when Emerald Erin released the Black Beauty bra I didn't really hesitate! 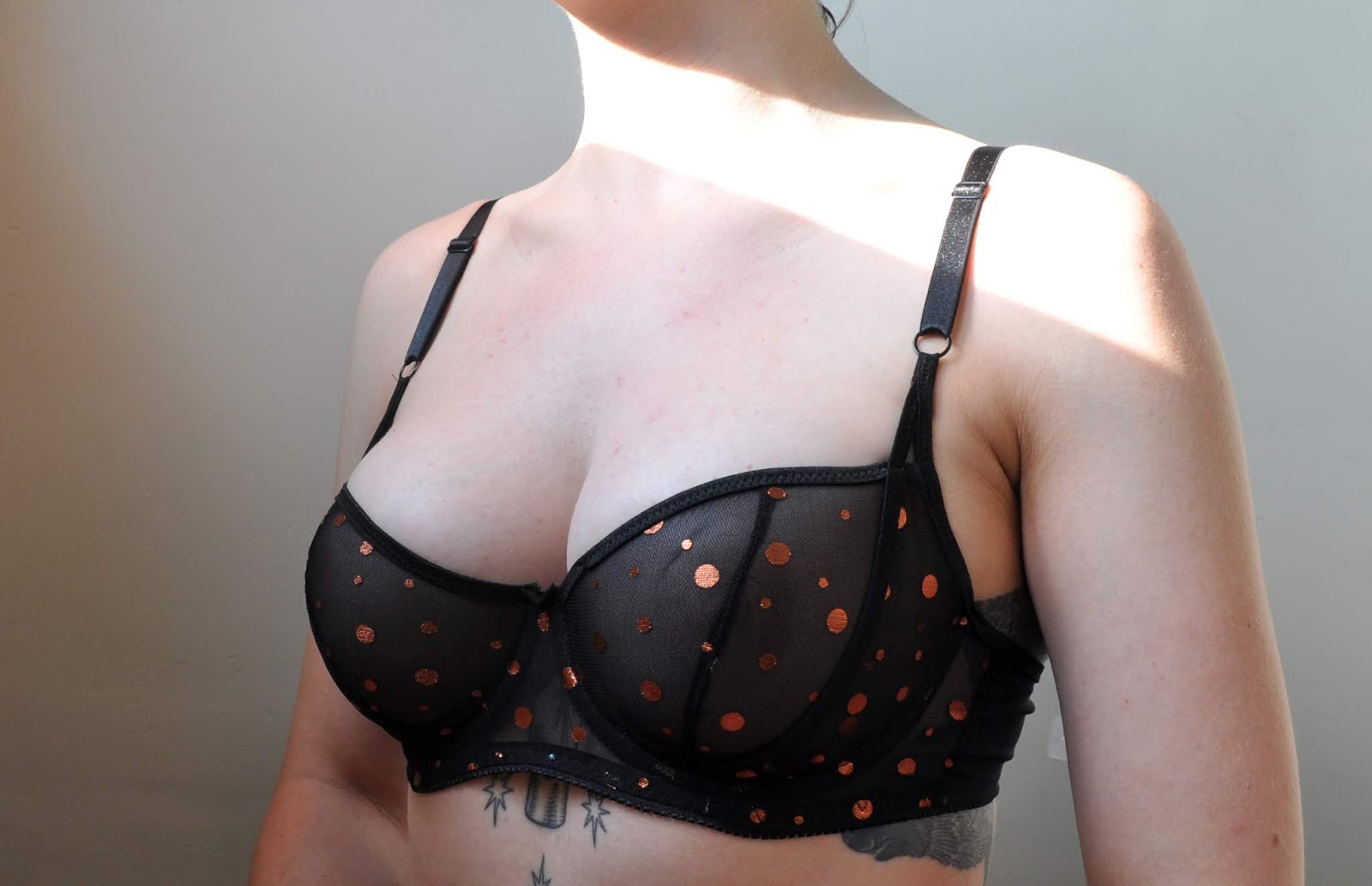 It took some work, and I should revisit this pattern at a later date and work on it some more, but for now I ended up with three brand new and wearable bras! I did make a few changes, as you might be able to see. My first version fit fine in terms of cup volume, but the horizontal seam really didn't work on me- the combination of a seam that didn't stretch and a lightweight cup fabric that still had some give led to some weird bumps. I turned the horizontal seam into a vertical one (aligning the starting point with the power bar) and this solved that issue. 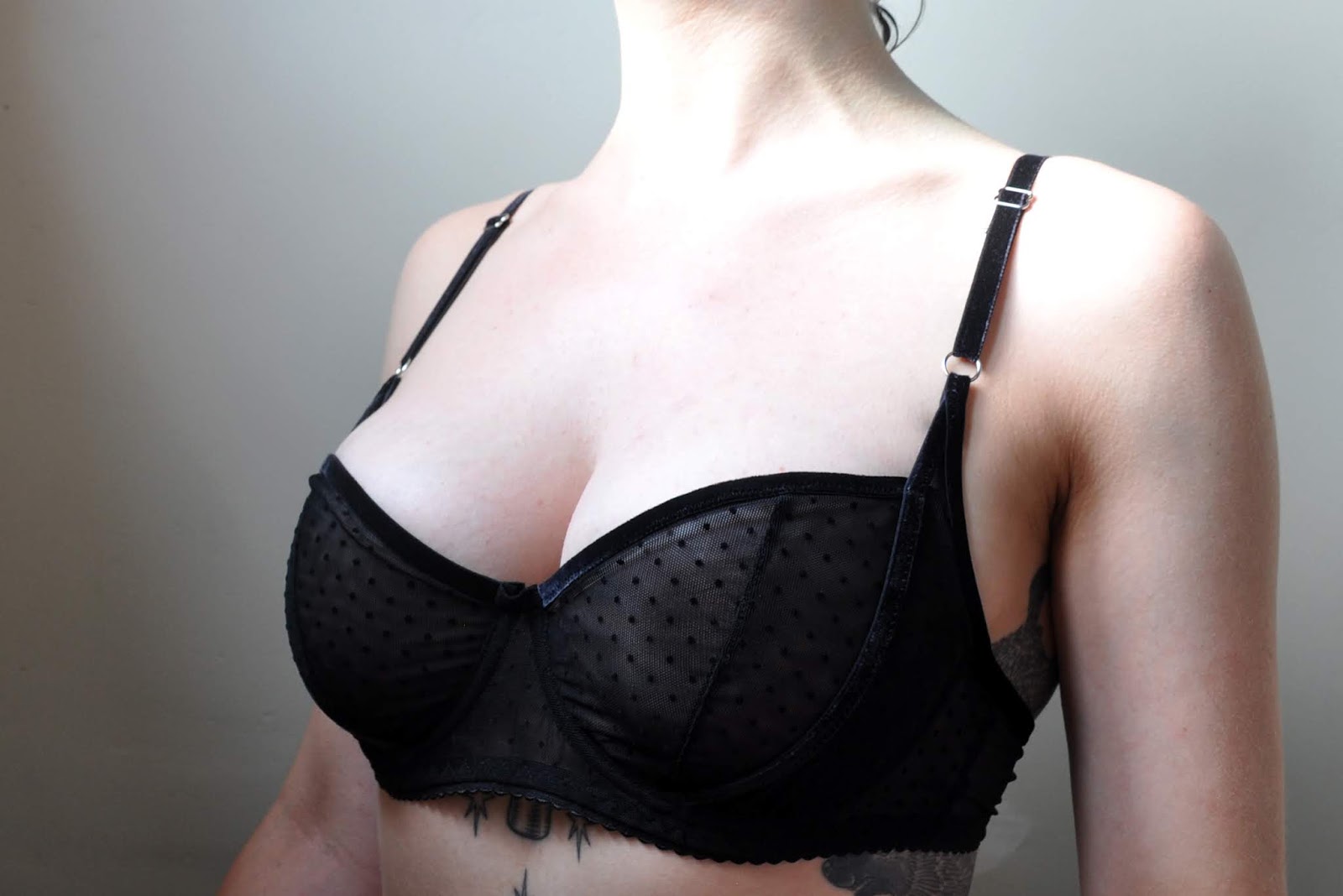 My other main problem was the straps: I loved the idea of the double straps made from the fold-over elastic, but the reality is that my skin is pretty sensitive and the thin elastic straps just felt scratchy. instead I turned the fold-over elastic into a little loop and attached a normal strap. Maybe not as pretty, but way more wearable for me! 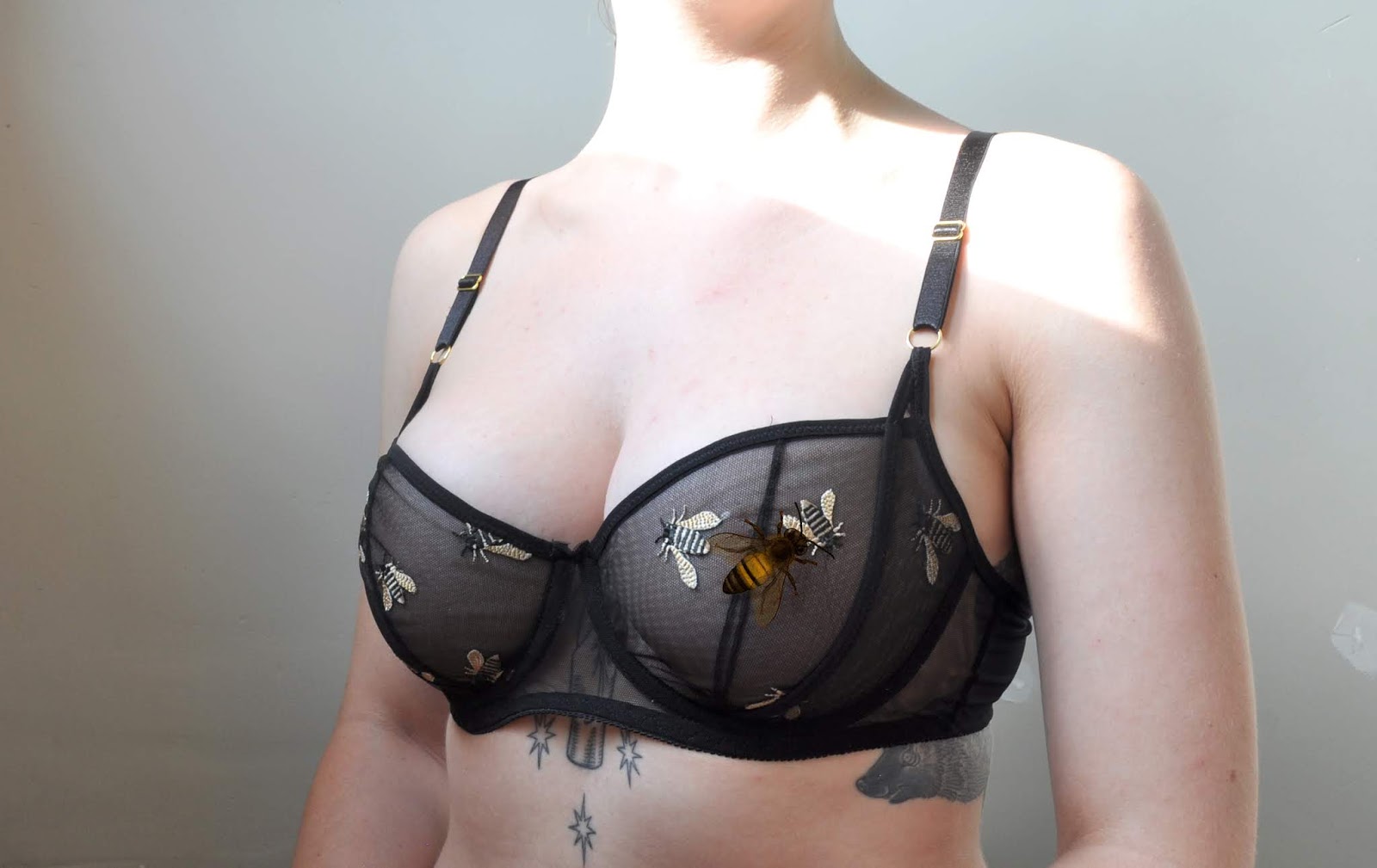 I used mostly stash materials for this, including the last scraps of my precious birthday bee tulle. Emerald Erin actually had bra kits with this exact fabric, but I had it already! I am going to fray check the hell out of those bees though, one or two were starting to unravel on the dress I made and I don't want that to happen to this bra! 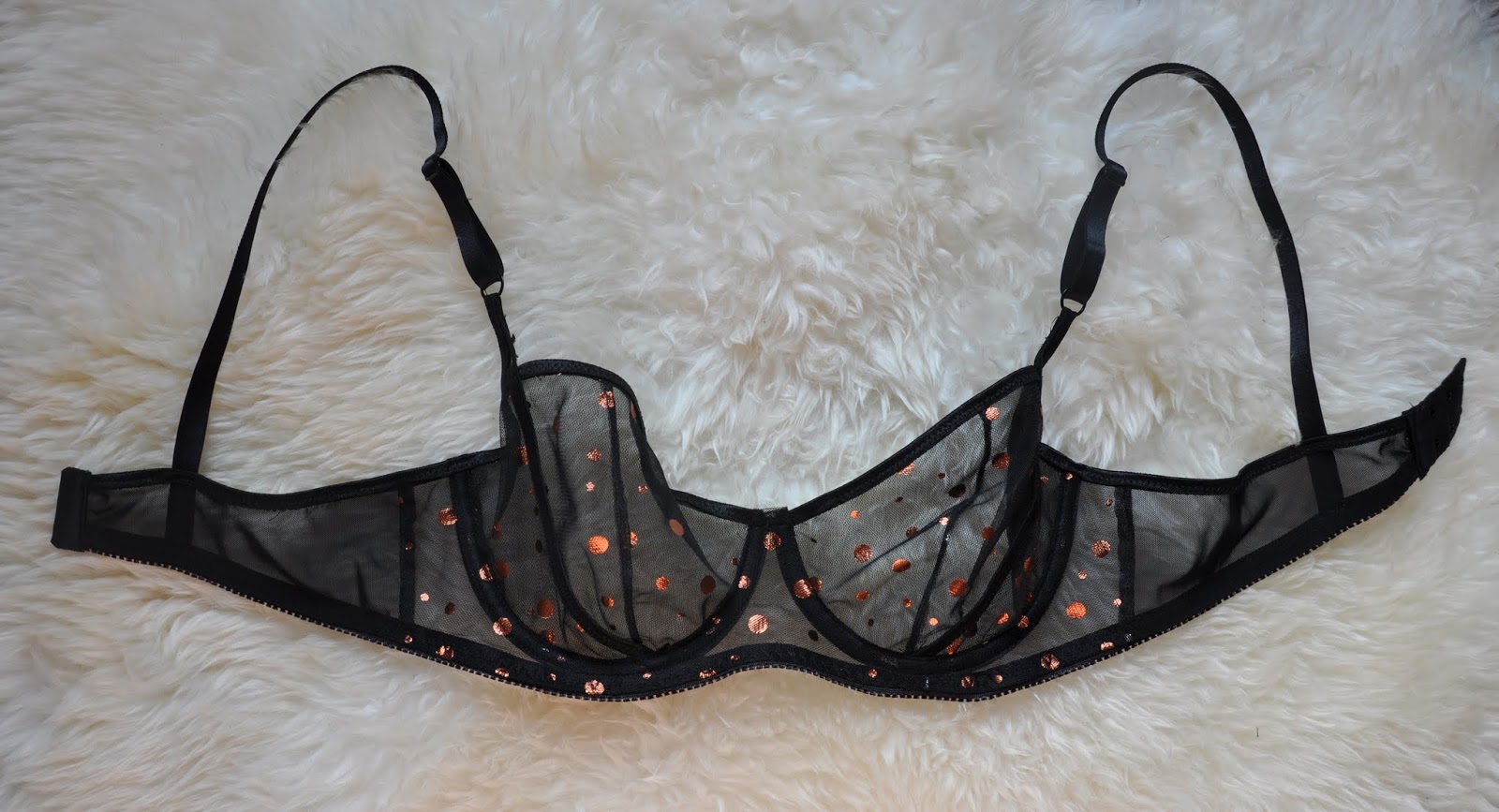 My first version was more of a toile: I had a piece of this tulle around and wouldn't really mind if it didn't turn out great. I saw it as a chance to test out techniques before cutting into the precious stuff. Another change that I made was to line the entire bra. The version I made is for non-stretch fabrics so it could be fine with one layer, but the thought of an unlined tulle seam going straight across my nipple is a big fat nope from me. I cut all the cup and bridge pieces from a very thin bra tulle, assembled the pieces separately and then basted the cups together before finishing/inserting them. It looks super clean and because the bra tulle is so sheer it still looks very lightweight. 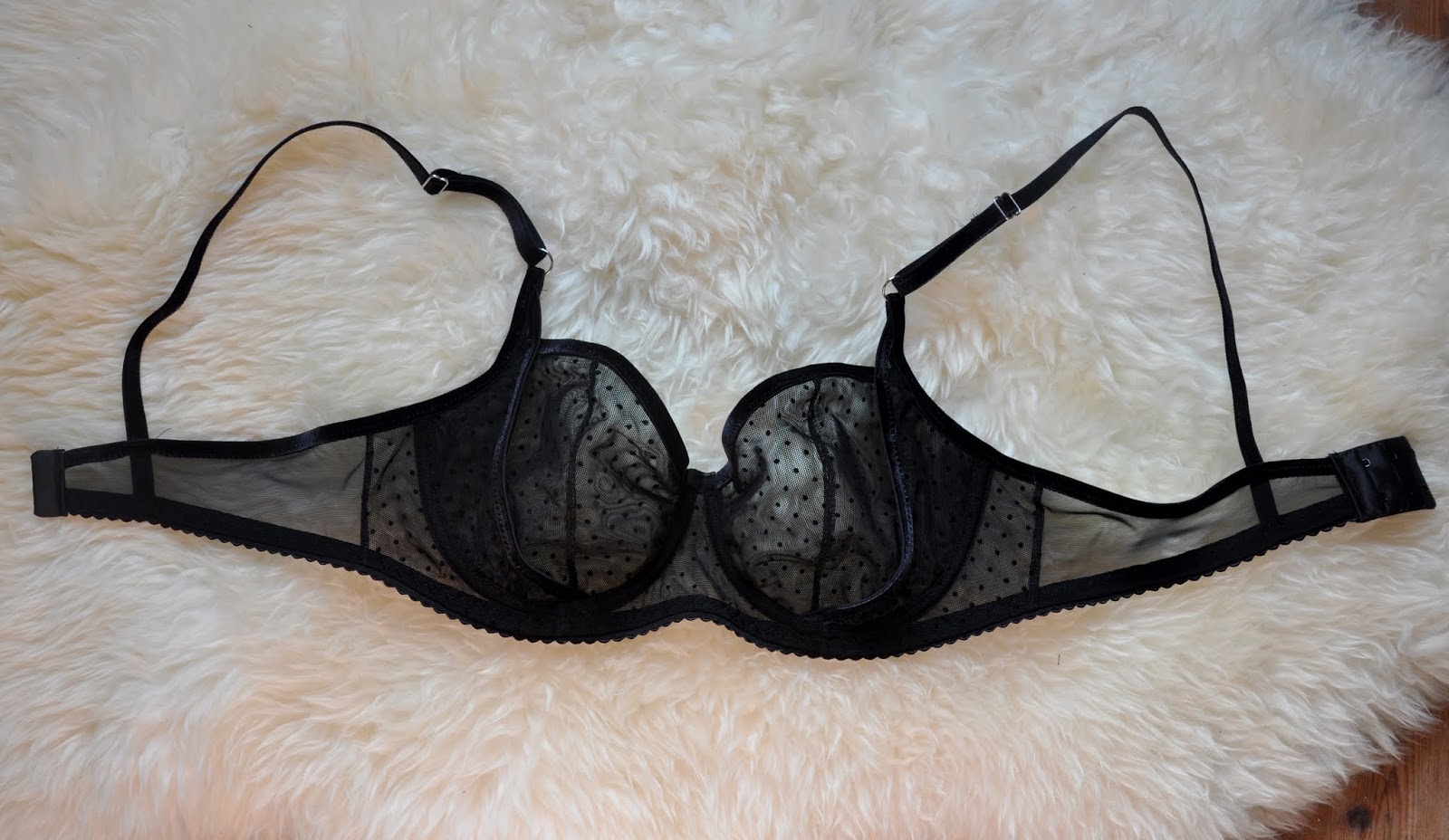 My second version is made using some stretchy mesh with flocked dots that I had lying around for a while. I used the same method for lining (which was an absolute necessity with the stretchy outer fabric) and used some glorious velvet fold-over elastic and strapping that I got from the new Small Bobbins webshop (check her out if you're in Belgium and want to sew lingerie: she has really cool stuff and the shipping is reasonable for once!). This one is super comfortable, I can see it become a favourite. The only downside is that the combo of stretchy outer/non-stretch inner makes for some wrinkling here and there. 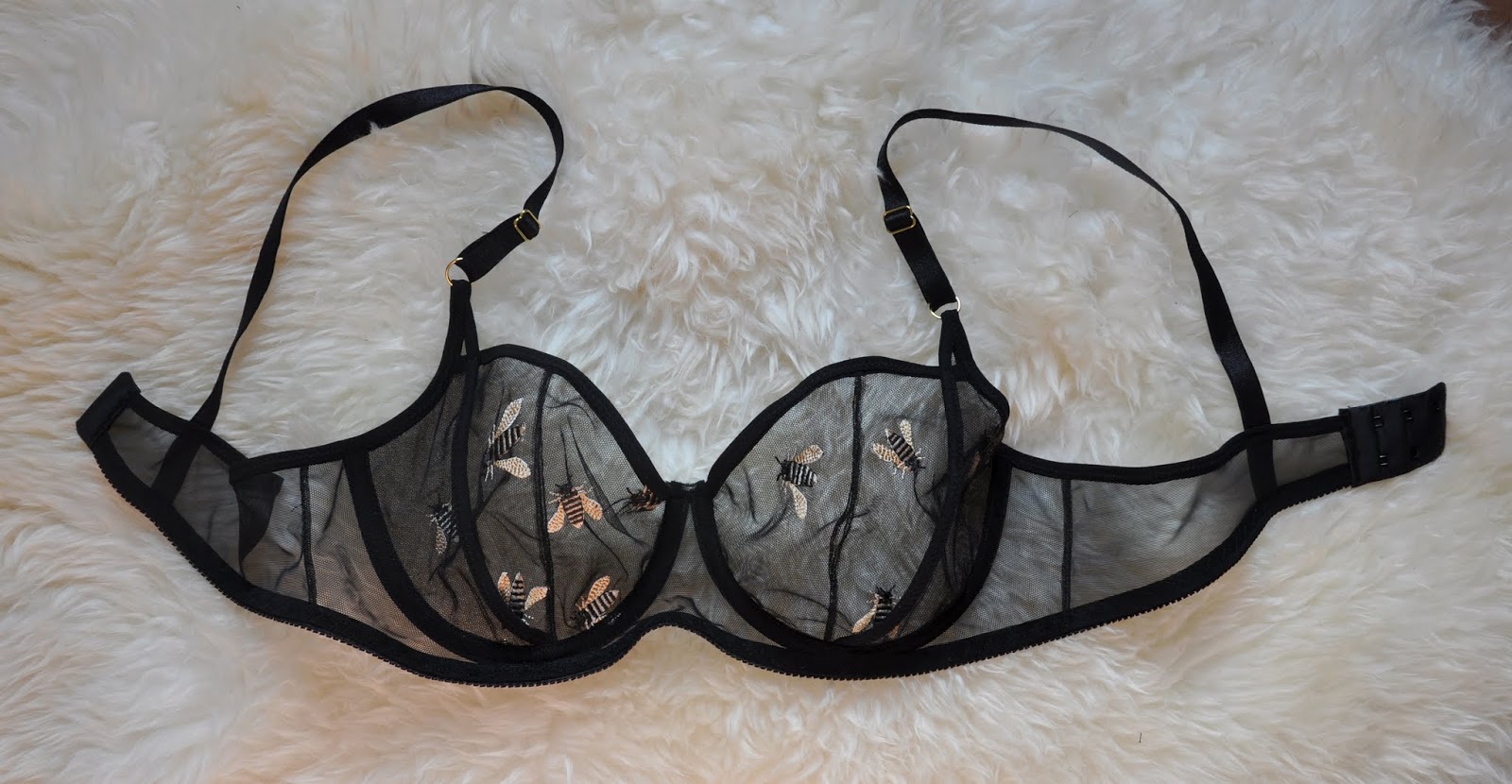 I actually made my bee version twice. The first one had this gold fold-over elastic that looked really cool but was an absolute bitch to work with (it was super lightweight and just stretched/warped/wiggled all over the place). It looked fine from a distance but up close the top of the cups was gaping and the whole thing looked messy. So I did it again with matte black elastic, and all was well.

I like the shape these have, so I'll probably keep working with this pattern. The three bras that I made are wearable and very welcome in my wardrobe, but I feel there's room for improvement! The main thing is that the bridge doesn't lie as flat against my chest as it should. I was thinking of narrowing it a smidge and adding a bit of width to the cup at the center front. Not much, just enough to give it more room to curve towards my sternum. But that's for a later date. I kind of want to sew some heavyweight denim now.
Gepost door Anneke op 07:44