I am the Bad Wolf. I create myself.

This was a very simple project. Should have been a quick make. But today I will tell you the tale of how sewing a hoodie took me four days.

I have a few H&M (gasp!) hoodies I like to wear as jackets, and decided to try and make my own a few weeks ago. The pattern is so simple I could just trace it from one of them (two front pieces, a back, a sleeve, a hood and an optional pocket) and I already had my fabric (an interesting textured black-and-white knit). What could go wrong?

Well, for one, the fabric frayed like a motherfucker. it unraveled if you pointed at it, so I realised I'd probably have to bind the seams (guess what got chosen when I had to decide between a printing press and an overlocker- definitely no regrets there though, expect some printing love in the near future- but back to the point). I also wanted this thing to be a bit hard-wearing, so I underlined every piece with a thin viscose jersey.

Except the jersey was very drapey, so to prevent sagging added rows of hand-basting on the inside, catching small bits of the outer fabric. This took a few Doctor Who episodes.

I then sewed the thing up, stitching bias binding to every seam allowance and hand-stitching them to the underlining. This took another few Doctor Who episodes.

I watched the entire first season whilst hand-stitching in the end. And because that got me in the mood, I made a matching patch: 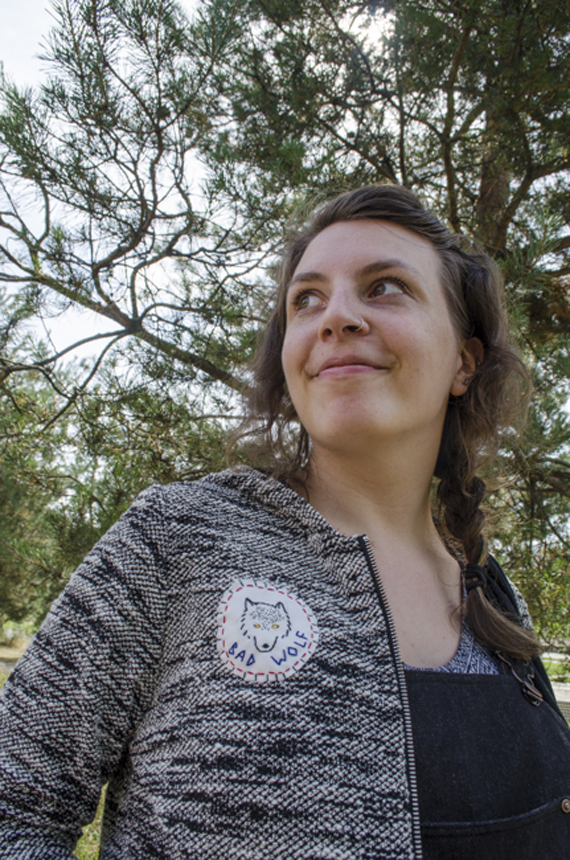 I just started season 4 and gah, I remember why I love this show so much! Realistic characters with backgrounds and real personalities and just really nice stories (take note, Moffat)... But this is a sewing blog.

I used a black sweater knit to make cuffs and a hem band, and finished it with a metal zipper. The end result does feel nice and sturdy, and it has the fit I liked from the storebought hoodies with the added bonus of cool fabric (and hours of hand-stitching).


These pictures were taken during Lieke's birthday party, by the way. Stephanie, Caroline and I are such professional bloggers, we'd even leave an amazing picknick (with CAKE!) to take pictures. And photobomb each other. And then we jumped into a fountain.

Later that day I joined Lieke to the pool and got to pretend I was a mermaid. We also won a diving competition. Not even kidding!

And of course, thanks again to Caroline for making my handiwork look so pretty!
Gepost door Anneke op 08:09