There's A Rat On My Left Shoulder

I made this dress a while ago, but only just got around to photographing it! I came across this pattern when I was making a wrap dress for my mother and used it as a starting point (changing it almost completely, the only parts left of the original were the bodice and the sleeve head). After this I decided to make the real deal for myself! 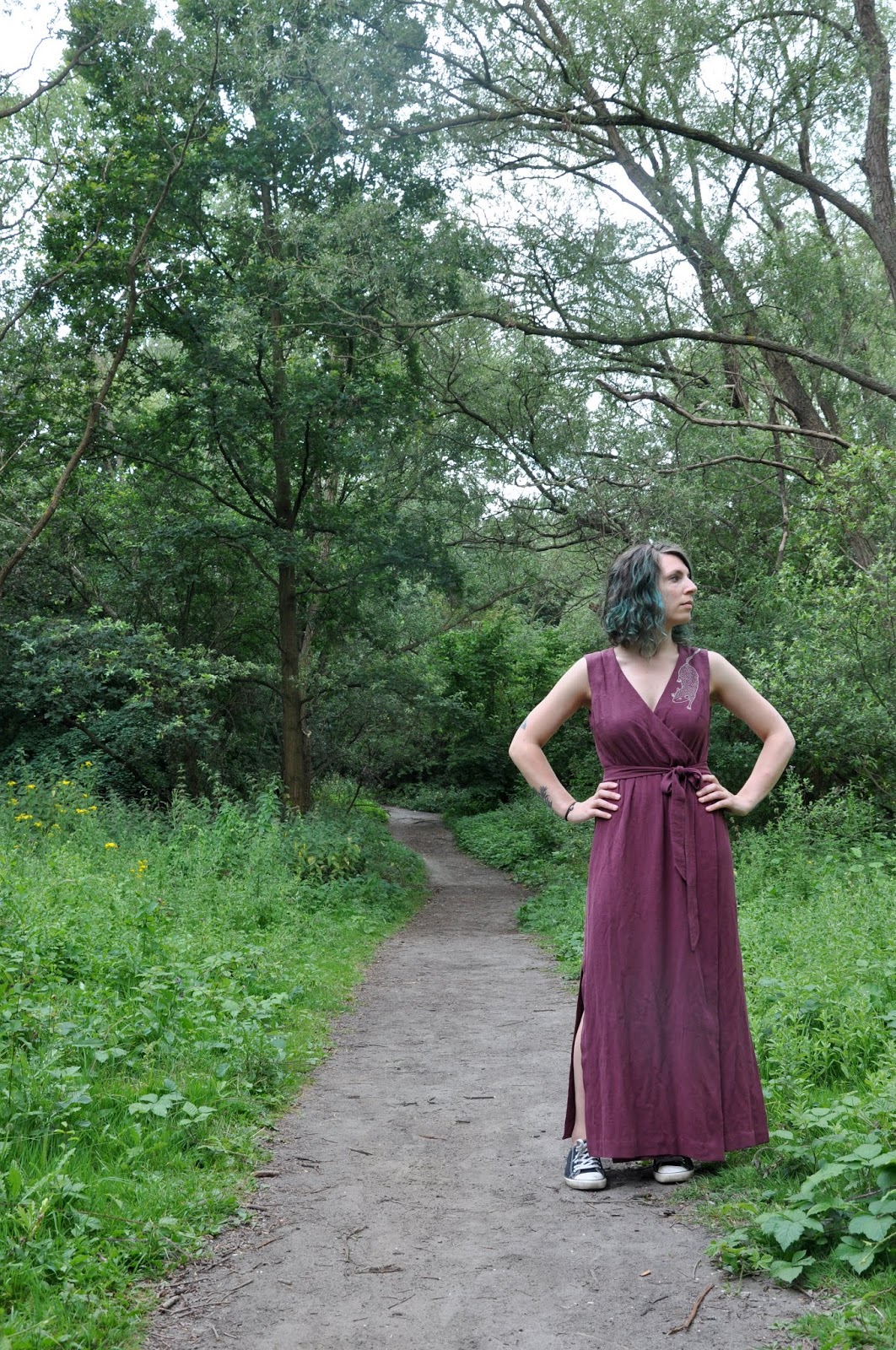 This is the Highlands Wrap Dress by Allie Olson, made in a linen-viscose mix that I dyed burdgundy (it started out as off white!). I've experimented with dyeing fabrics recently, and so far it's always been successful. It's a great thing to do when you like the texture of a fabric, but not the colour! 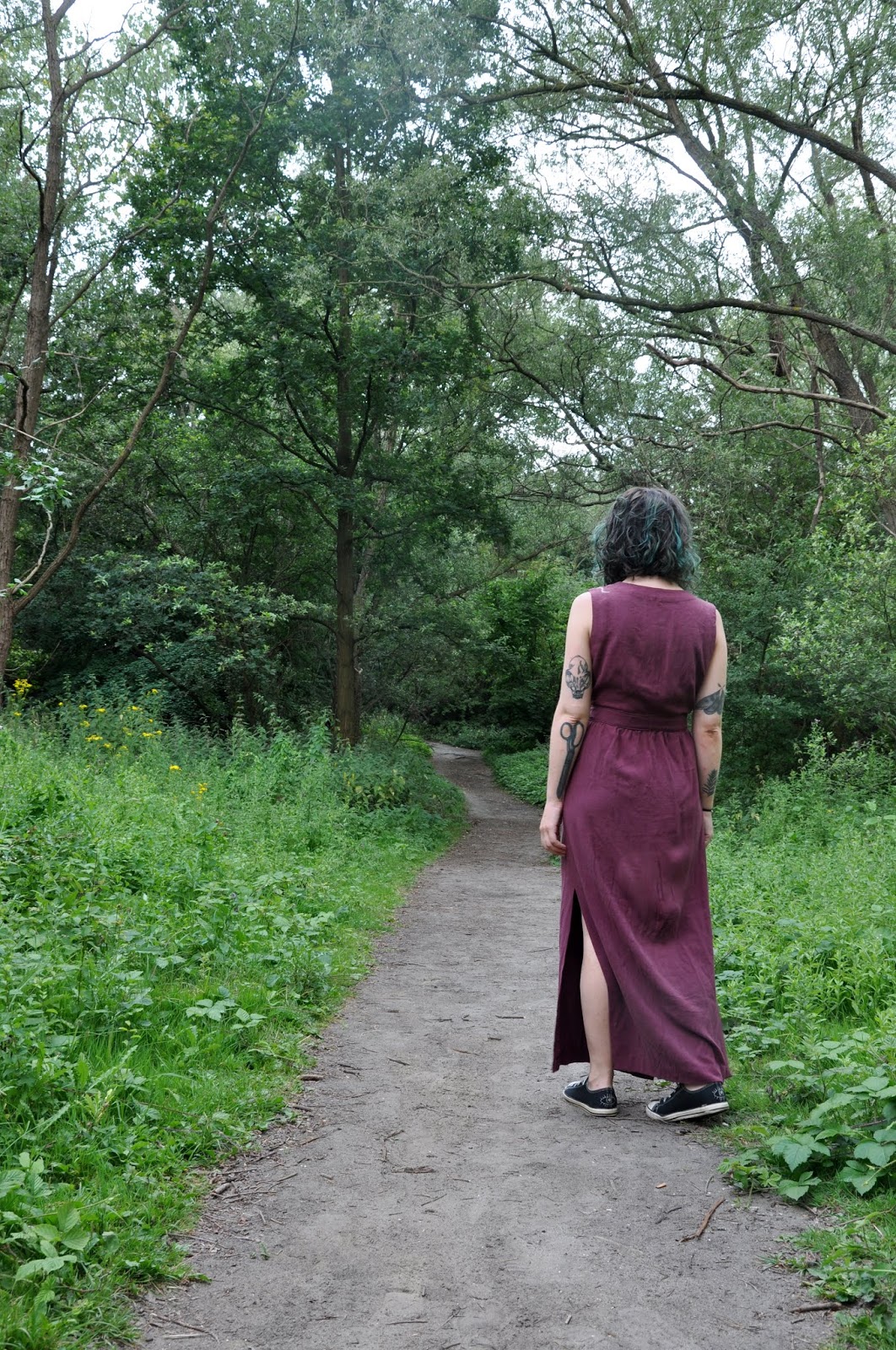 I really enjoyed sewing this pattern. The instructions make for a very clean and neat finish, but it's still easy to follow. I had made a muslin for my mother's dress based on this pattern and it fit her really well from the start, so I took the risk and didn't muslin my version (my mother and I are kind of similar in size and shape). It's maybe a smidge too big, but nothing too bad. 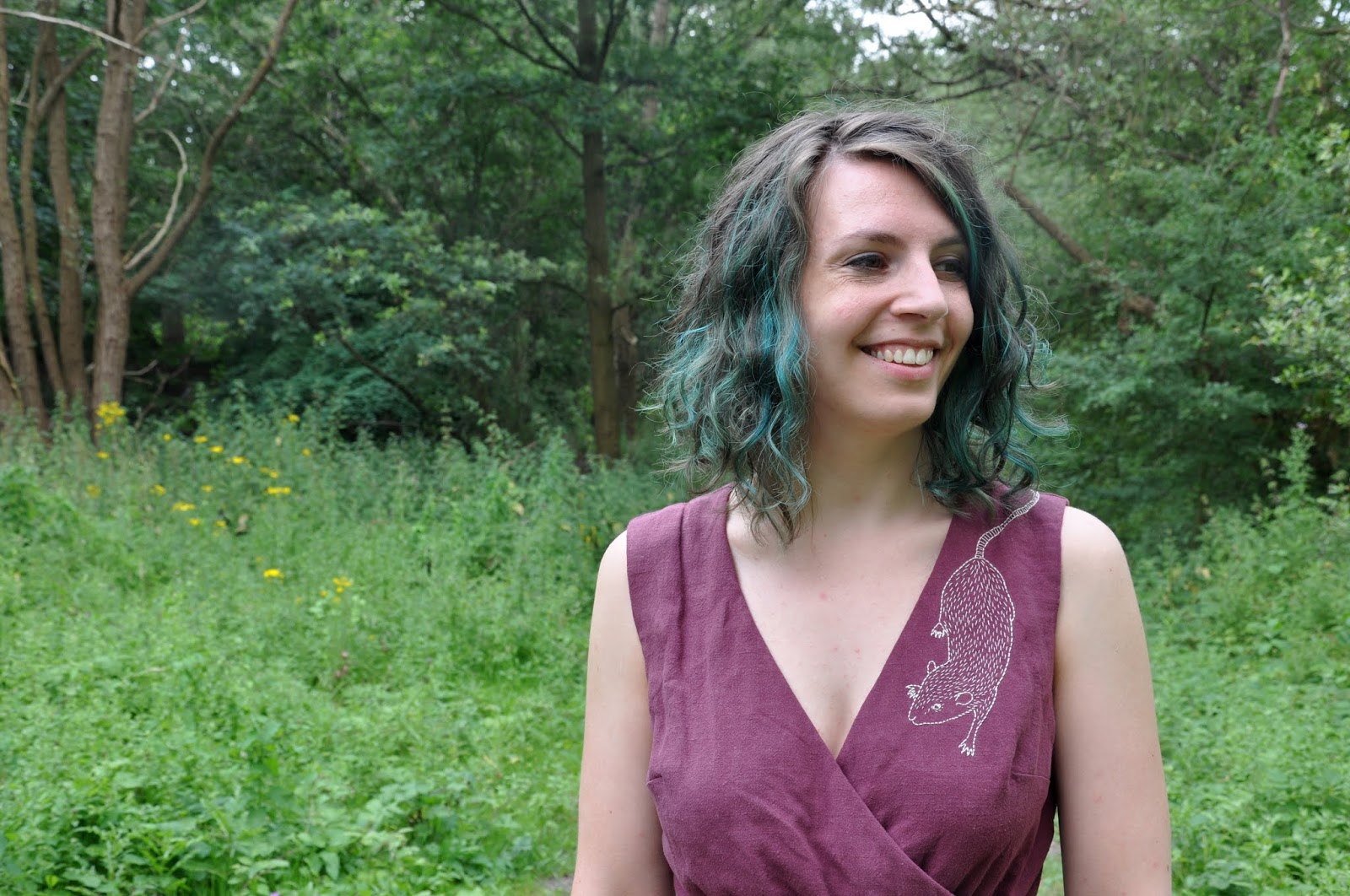 I followed the instructions to the letter, except for the finishing of the facings. There is some hand embroidery on the shoulder of this dress, which was done before the pattern piece was cut out or stitched together, and I didn't want any visible topstitching to interfere with that. So instead of topstitching all around the neckline and armholes I sewed the facings down with a blind stitch, and finished the hem in the same way. That hem is where I hit my only snafu by the way, and it's only due to me being an idiot: I had seen in the finished measurements that the pattern was drafted for someone quite a bit taller than me, but somehow thought it would still be fine (on a full length maxi dress). So I went ahead and hemmed the thing with gorgeous mitered corners and some more hand sewing, and of course it was too long. I put it away for a while, then gathered the courage to unpick everything and shorten it. 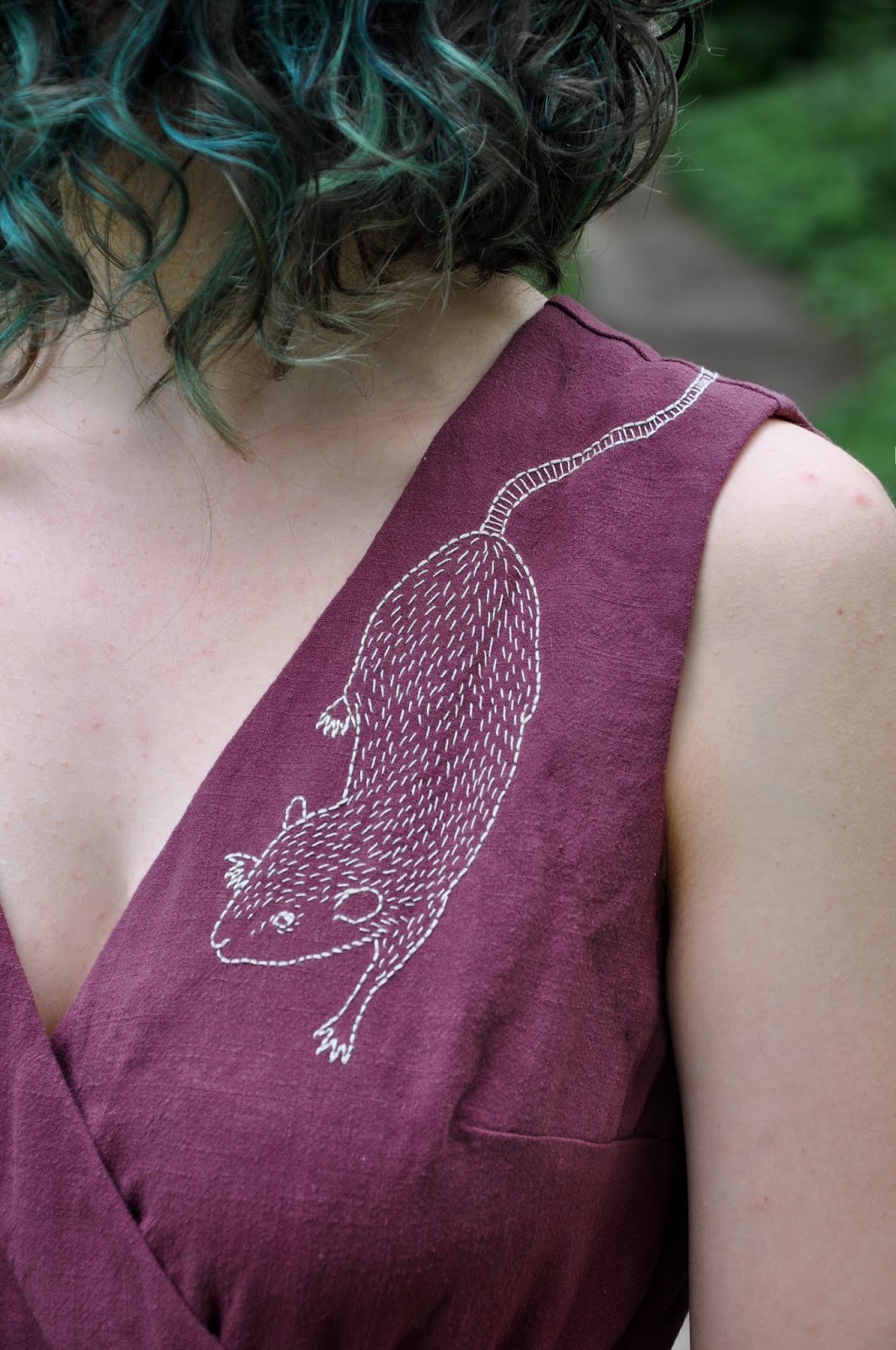 The real star of this dress is of course the embroidery! I knew I wanted to add some before I started making it, but wasn't sure about what. Then the elections happened in Belgium and it suddenly became really clear that I needed a rat on my left shoulder. This probably won't really make any sense to readers outside of Belgium, but this rat here isn't going to roll up anything!

I traced my pattern piece onto a piece of paper to sketch the rat, and then used yellow carbon paper to put it onto the fabric. I had cut out most of the pattern piece but left a piece of fabric around the area where it would be embroidered, so I could put it in a hoop. I did the majority of the rat like this and then added the tail once the shoulder seam was sewn. It was a really easy way to add something to a solid dress! 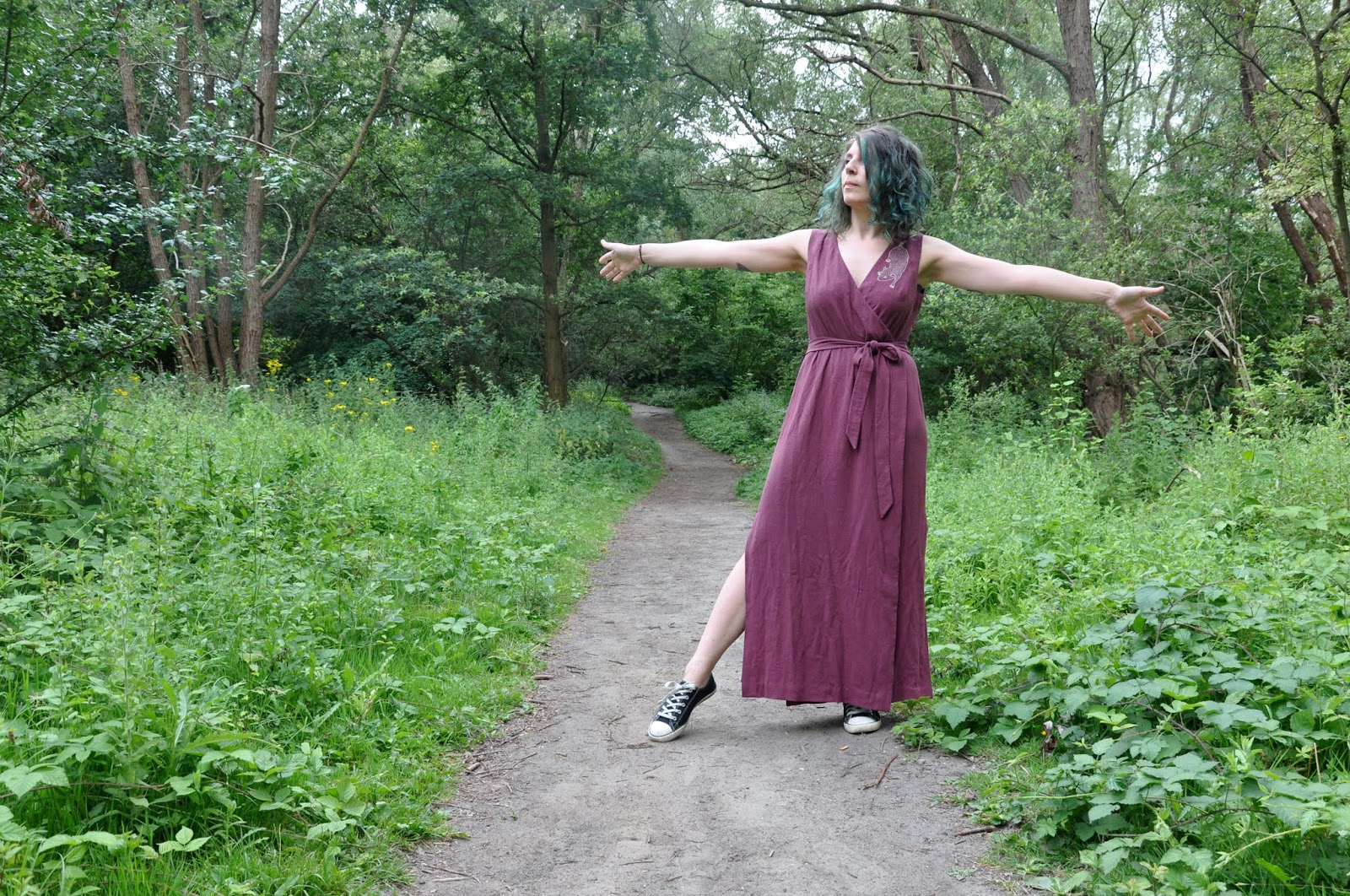 I like this dress on me and it will get worn, but I did notice it's not very bike-friendly. We went to a bit of wood nearby to take these pictures and I had to hold the dress closed with one hand to keep things decent. It's not a problem when I'm walking, but I do ride my bike almost every day so I probably won't make another one for this reason. So if you don't frequently ride a bike, don't hesitate to give this pattern a go!
Gepost door Anneke op 07:31