It's got me written all over it. Well, not really, but give me time and a crayon.

I've been doing some drawing lately, and thought I'd post a few things I've been working on! It's very strange, I don't get around to drawing nearly as much as I'd like to, and everytime I get into it again I'm kicking myself for not doing more of it. So to motivate myself a bit more I'll show some things that did get made! 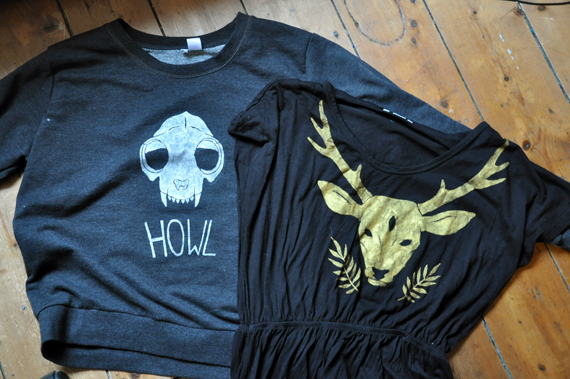 I've been trying to spice up some storebought (omg!) clothes lately, and find that painting something on them is a really nice way to do so. This sweater was bought in a wardrobe emergency (I went to a party on a Friday night and would spend the night there, going straight to work the day afterwards, but stupidly forgot to pack a clean shirt for that next day. WOOPS.). It was a bit too big (no time to try it on!) so I took in the shoulders a bit and then painted a cat skull on the front. It's quickly become a favourite!

The black thing is a basic viscose maxi dress which I adorned with a stag head and some leaves. It's more of a summer thing though, so it's been packed away in the closet for now. I made both of these in the same way: sketched a design on printer paper, used carbon paper to put it on the garment and then used Setacolor fabric paints, small brushes and some patience (+ a few Night Vale podcasts) to get the job done. Both of these are holding up really well in the wash as well! 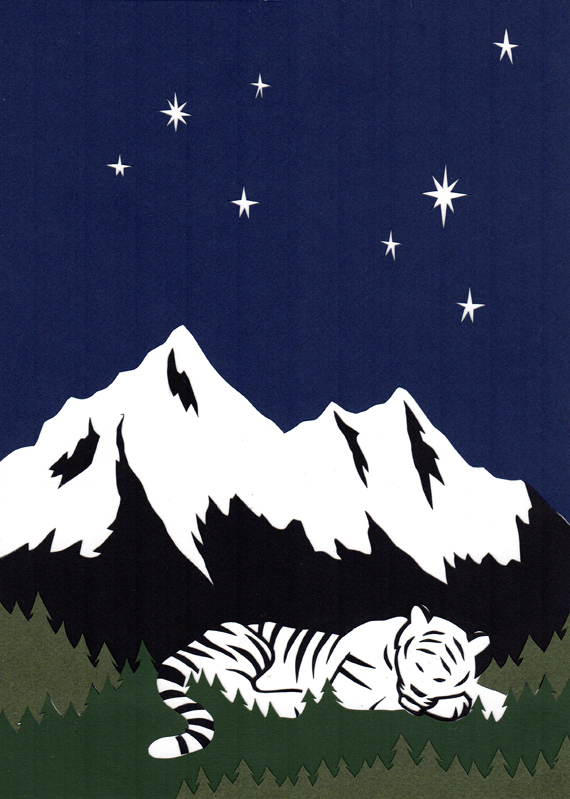 Next up is a birthday card for a new friend. He likes snowboarding and white tigers, and I think I managed to cater to that! This was made in my usual way: cut things out of paper and glue them together. Sometimes I'll just scan all the pieces separately and put them together in Photoshop, but since I was going to give the original (more like, didn't have time to get it printed, cough) it all had to fit together on the page. It only took me an evening, although those tiger stripes were the cause of some swearing! Last but not least: another birthday present! My friend Stéphanie had her birthday in December and invited a bunch of sewing people over to her house for food and fun times. I decided to make her something to decorate her sewing room with! Again, everything has been hand-cut from coloured paper and then glued together. I was super happy to hear she loved it! This is not the only drawing I've made for her recently, but the other one is SUPER TOP SECRET at the moment, hehehe...

I'm currently back on working on that quilt I started ages ago (embroidering all those stars with metallic embroidery thread seemed super daunting but I'm getting the hang of it- short pieces of thread and a needle with an even larger eye than usual), but I do think I'll make some more time for drawing!
Gepost door Anneke op 10:46