It Has Come To This

A few years ago I said that making my own underwear was not on the horizon. I have a pretty standard size, and finding bras that fit me was never a problem. But recently I started thinking that it could save me some money (bras are maybe the only thing that are cheaper to make than to buy) and allow me to make things that look the way I want them to (I'm very picky about prints, lace and the way things feel!). And if it didn't work out I could always get something from Hanne.

The downside is that Belgium might be one of the worst places to look for lingerie supplies, so while I was waiting for my underwires to arrive in the mail I decided to get started with something easy and try the Watson bra. I liked the longline band and thought it could be supportive enough to wear under looser tees and sweaters, and the end result is even better than expected! 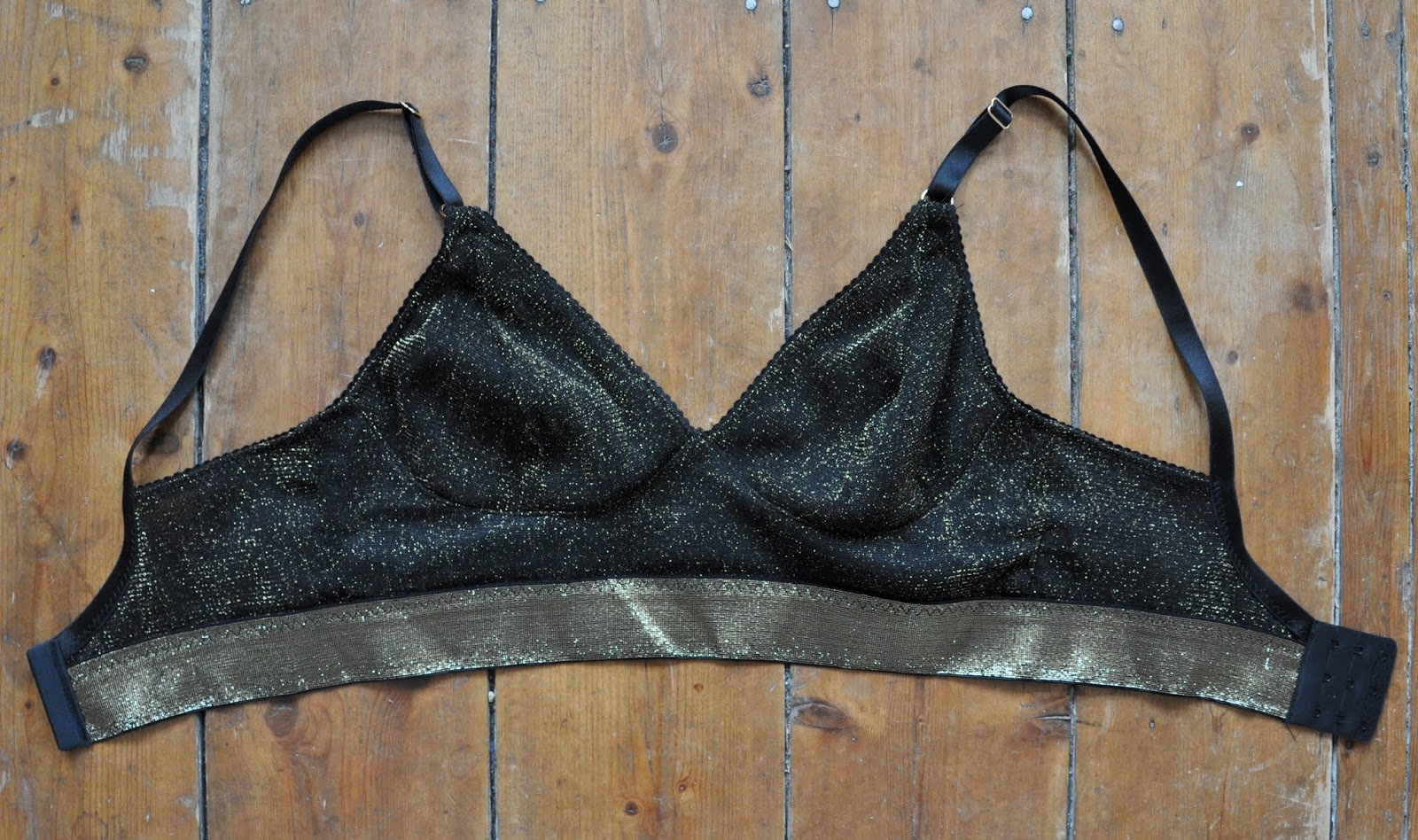 It took me two versions and some pattern adjustments to get to this version, made from a very thin (and stretchy) black and gold mesh. I was between band sizes and went for the smaller size first (32D), which was a mistake: it was uncomfortably tight in the band, but the cup size seemed ok. I tried again with a 34D and while the fit of the band was spot on this time the cups were gaping at the center and at the side. I took a wedge out of the bottom of the cup at both sides and out of the side of the cradle, making the bottom curve of the cup more exaggerated and the cradle a bit wider. This glitter version was the third one, and it fit really well! 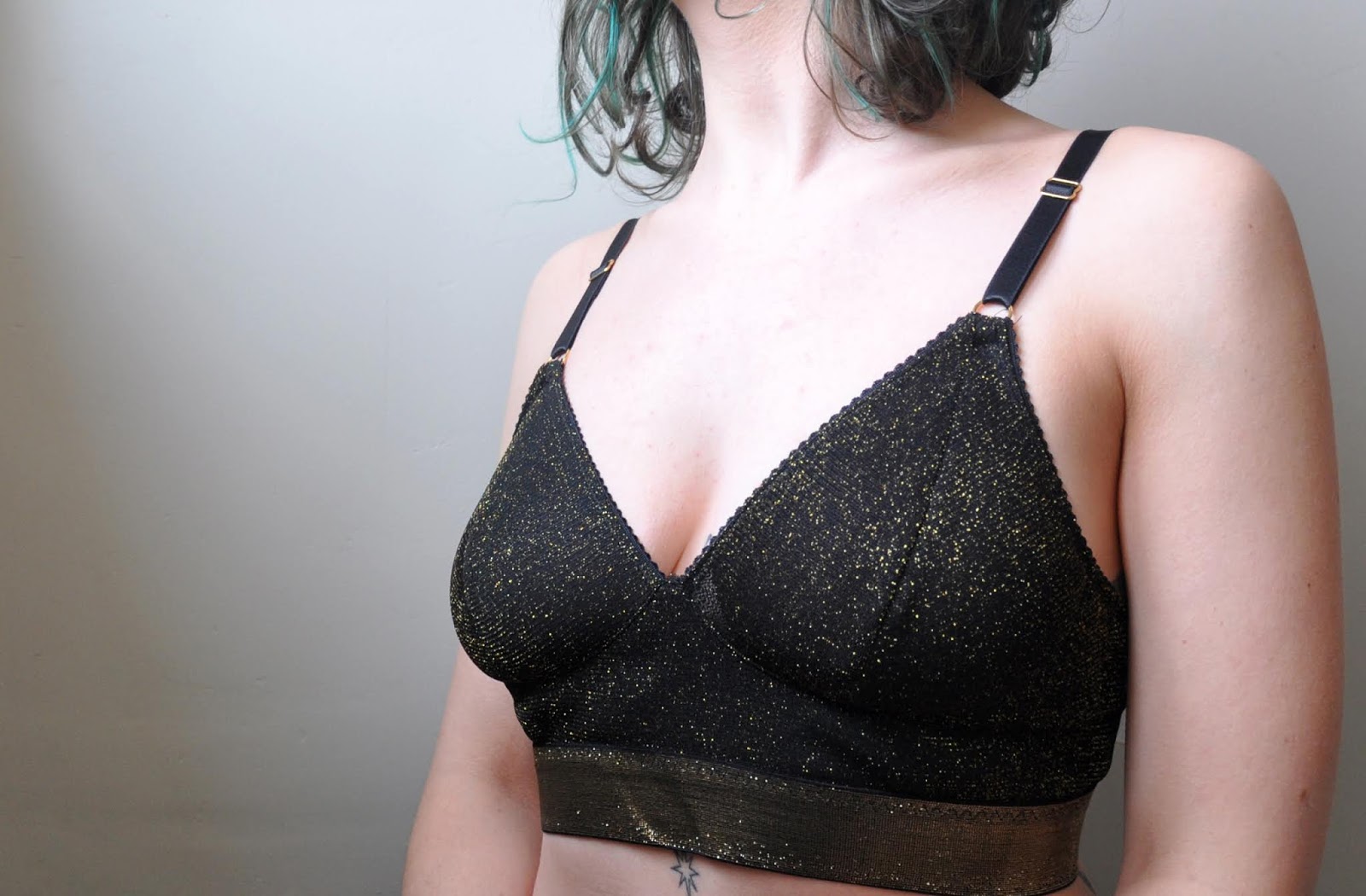 I had been using plush back elastic for the bottom of the two first versions, but found this golden elastic in my stash and thought it matched the mesh too well to pass up. All I did was align the elastic with the bottom of the bra (with the wrong side of the elastic on the right side of the bra) and stitch it down at the top with a triple zig zag stitch. After that I trimmed the mesh underneath away, since this elastic has a very soft back and I wanted that on my skin. 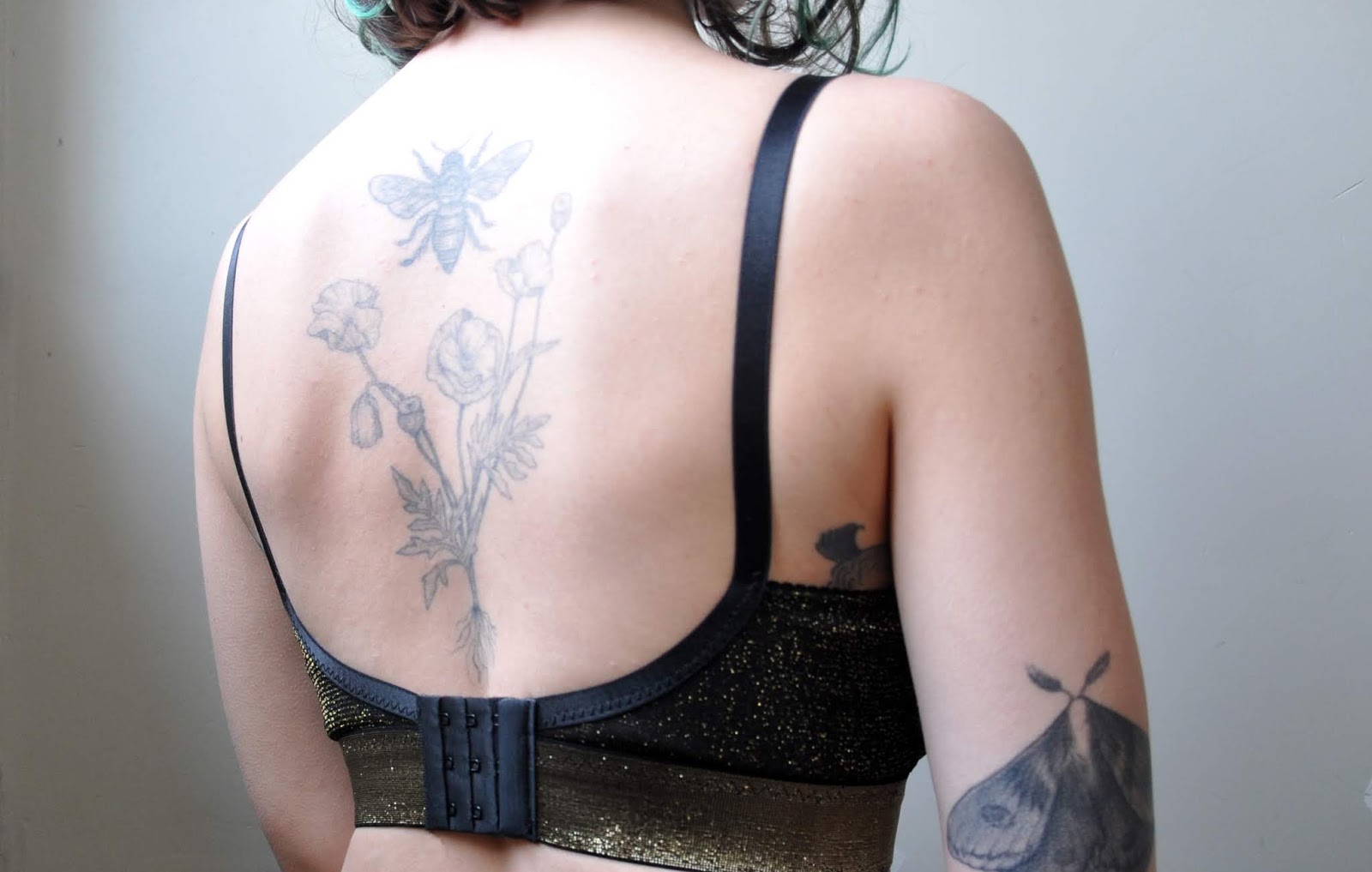 I like the way the straps are attached and noticed my favourite bras have them sewn on the same way. Not entirely sure about having the sliders in front, I'm a little worried it might show through/look weird under some shirts. 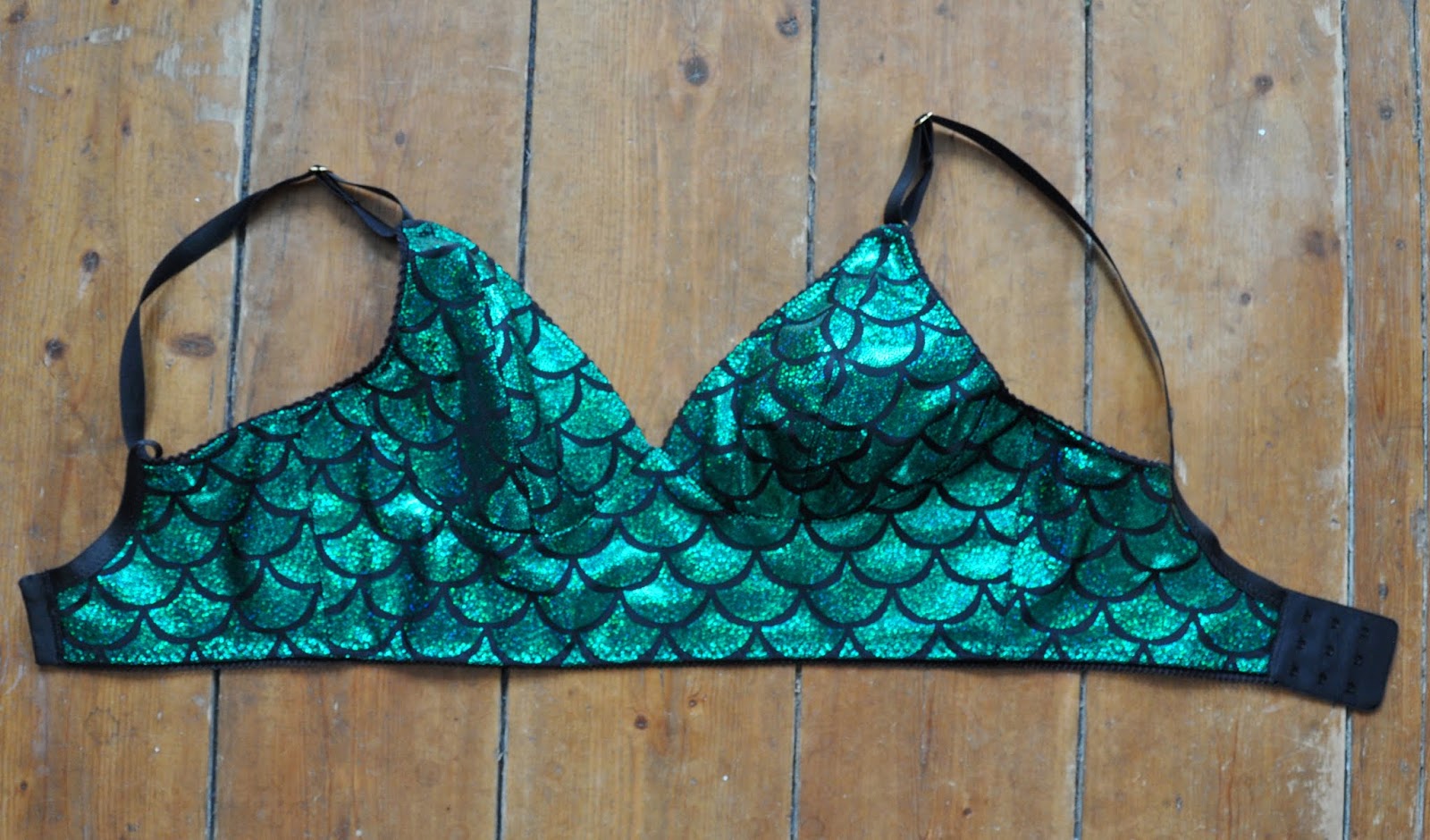 After that little victory (and wearing it for an entire day) I steamed ahead and used the last scraps of my precious glitter scale fabric to make a second version. I had to throw print matching out the window, but feel like this looks pretty cool! 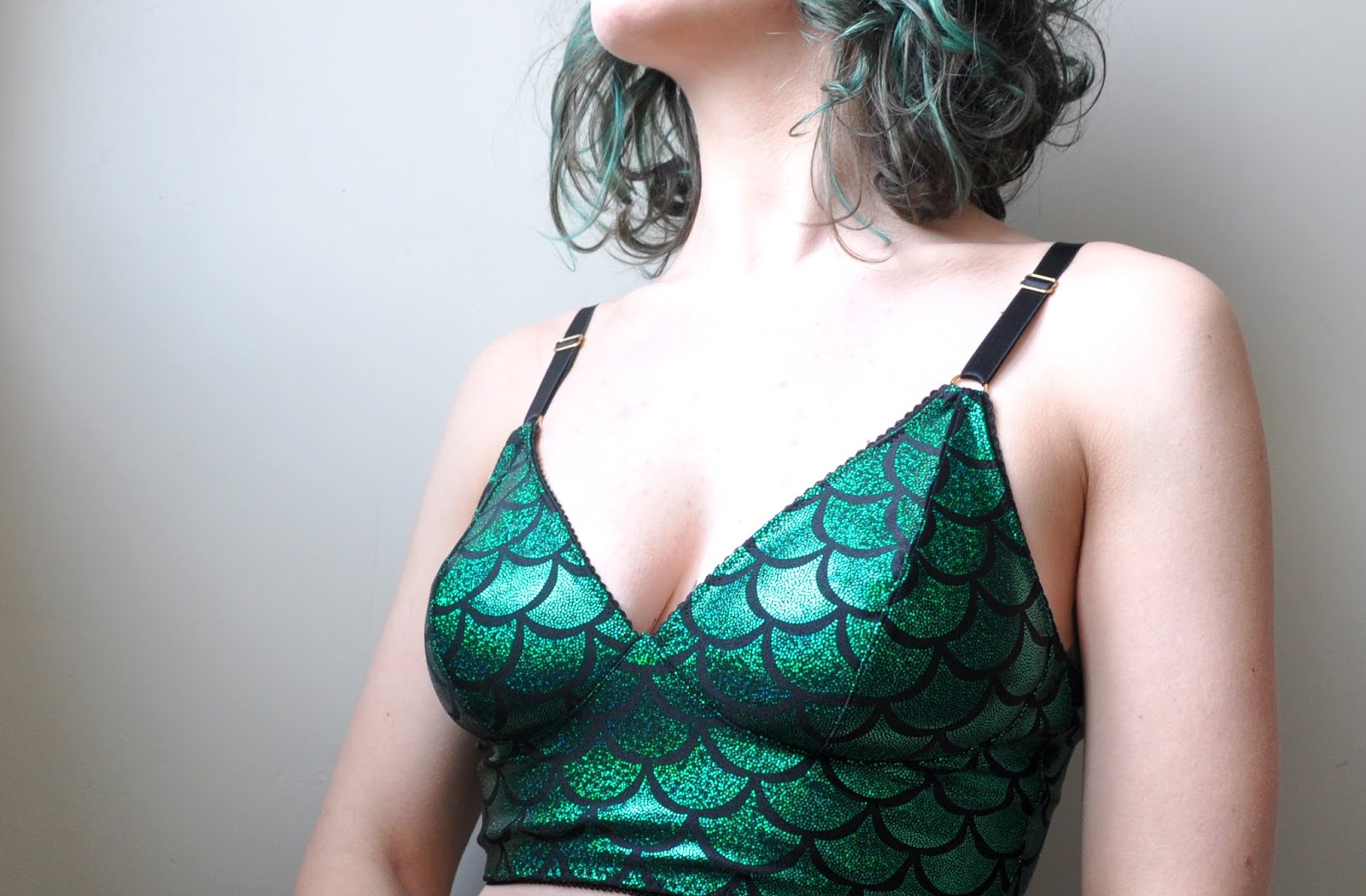 I pretty much constructed all these as per the instructions, with one major change: I lined the entire bra with powernet for support (especially in this stretchy mesh). At first I was a bit worried that this would be too firm for a pattern designed for pretty stretchy material, but as it turns out this resulted in something super comfortable that still looks good enough to wear as a proper bra (and not just for inside the house). 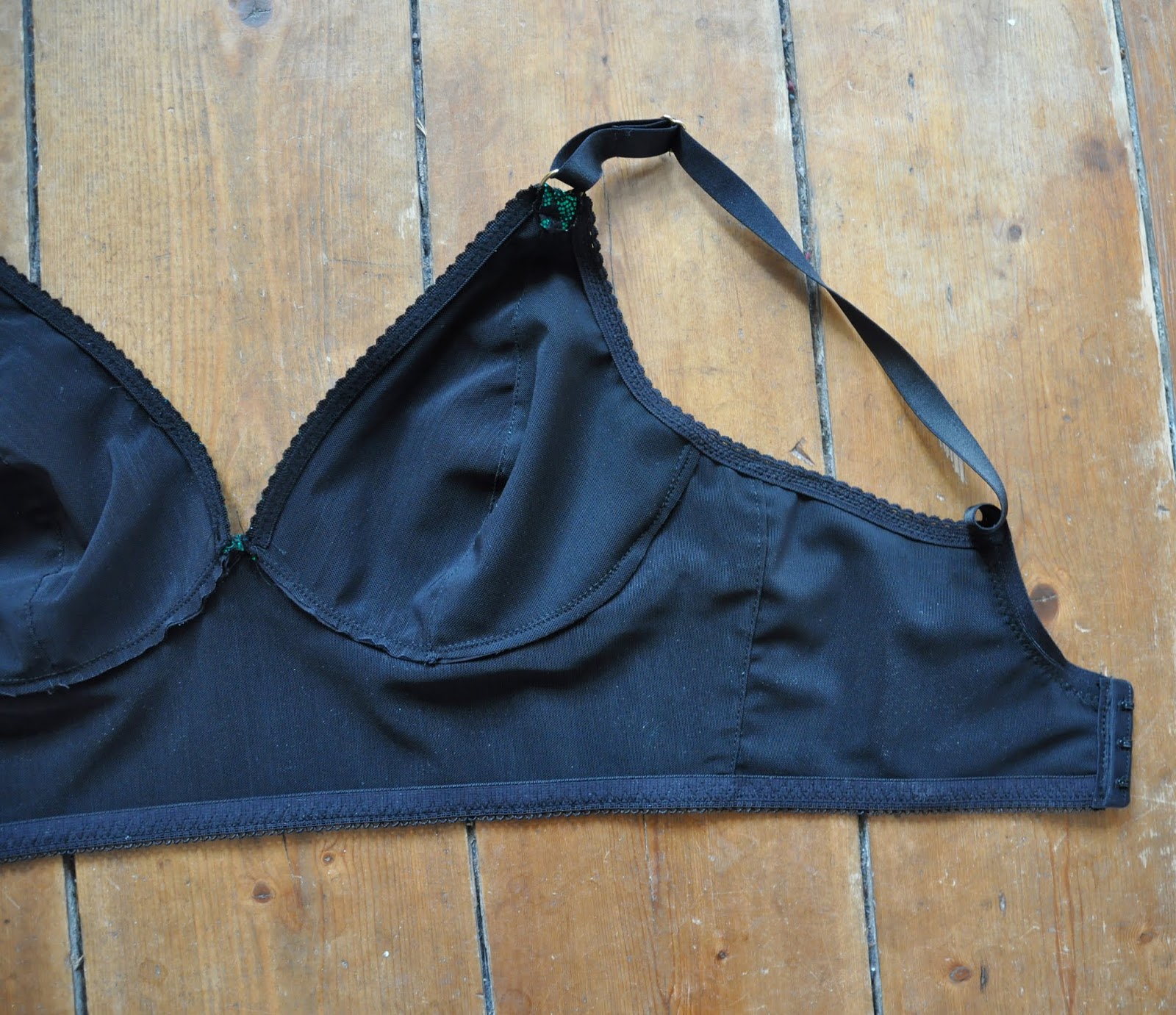 Using a lining also makes the insides look very neat and tidy, except for that cup seam of course. I was a little worried that could get irritating, but it hasn't so far. I could probably figure out a way to cover that seam up but... who is going to inspect the insides of my underwear?

Now let's see what happens once those underwires get there...
Gepost door Anneke op 07:15