The Wallpaper Had It Coming!

I can't believe Sew it Up is almost over! We're already at the fourth challenge, and I'm stoked to say that I'm still in the running! So if you like what I made this week and want to see me in the final, please do go here and vote for my paper dress! (The poll is, as usual, at the bottom of the post!)

This week was all about 'unconventional materials', meaning NO FABRIC. We could use fabric as a base, but nothing was allowed to be visible on the outside. I decided to use paper since it's a medium I pften use in my illustrations, and I thought I could try and make something really beautiful with limited supplies. A trip to the thrift store later, I ended up with an outdated dictionary and a roadmap of France, which all led to this: 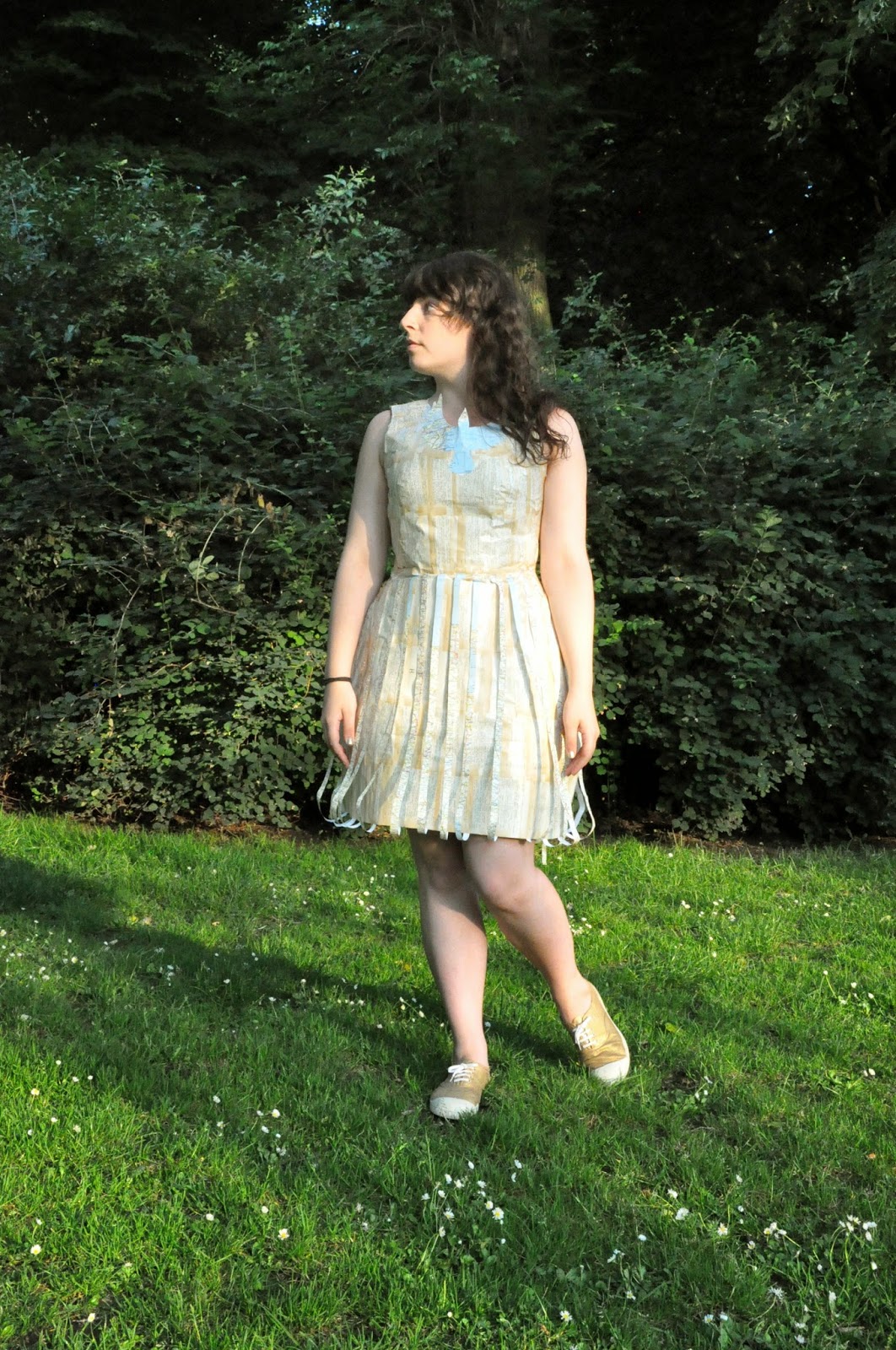 I thought about this design for a while. Paper doesn't drape the way fabric does, and using a book and a map meant I had loads of small pieces and one big one to work with. I decided to make a base dress with a fitted bodice and an a-line skirt and sculpt the paper around it, almost like a shell. 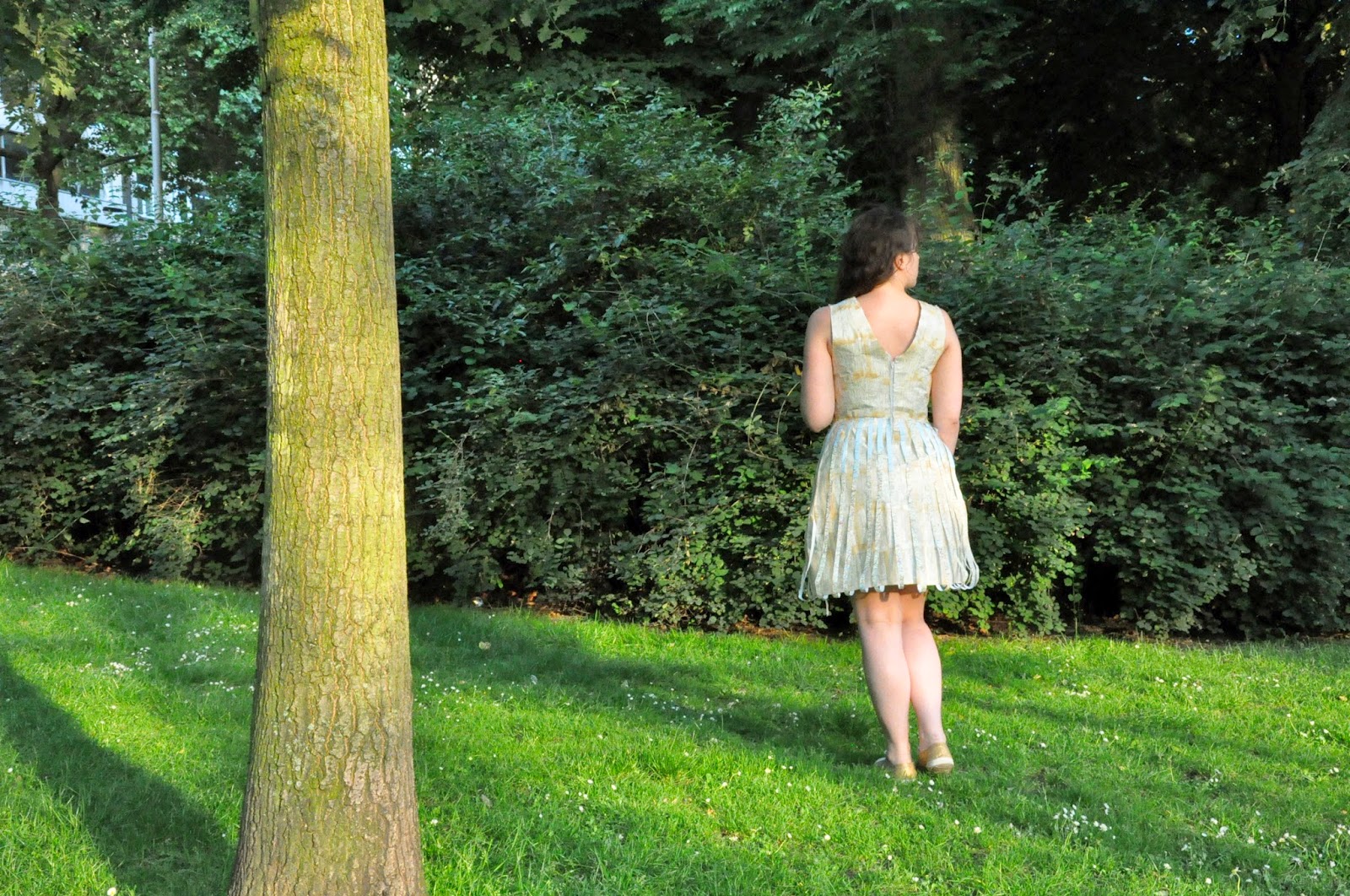 Tearing out the pages of the dictionary and cutting them into strips took the longest and was the most tedious part of the process, I can tell you that! I did some experimenting with different glues and paper placement and decided to use bookbinder's glue for the final dress. It adheres to the fabric really well, glues the paper smoothly without rippling and remains quite flexible. 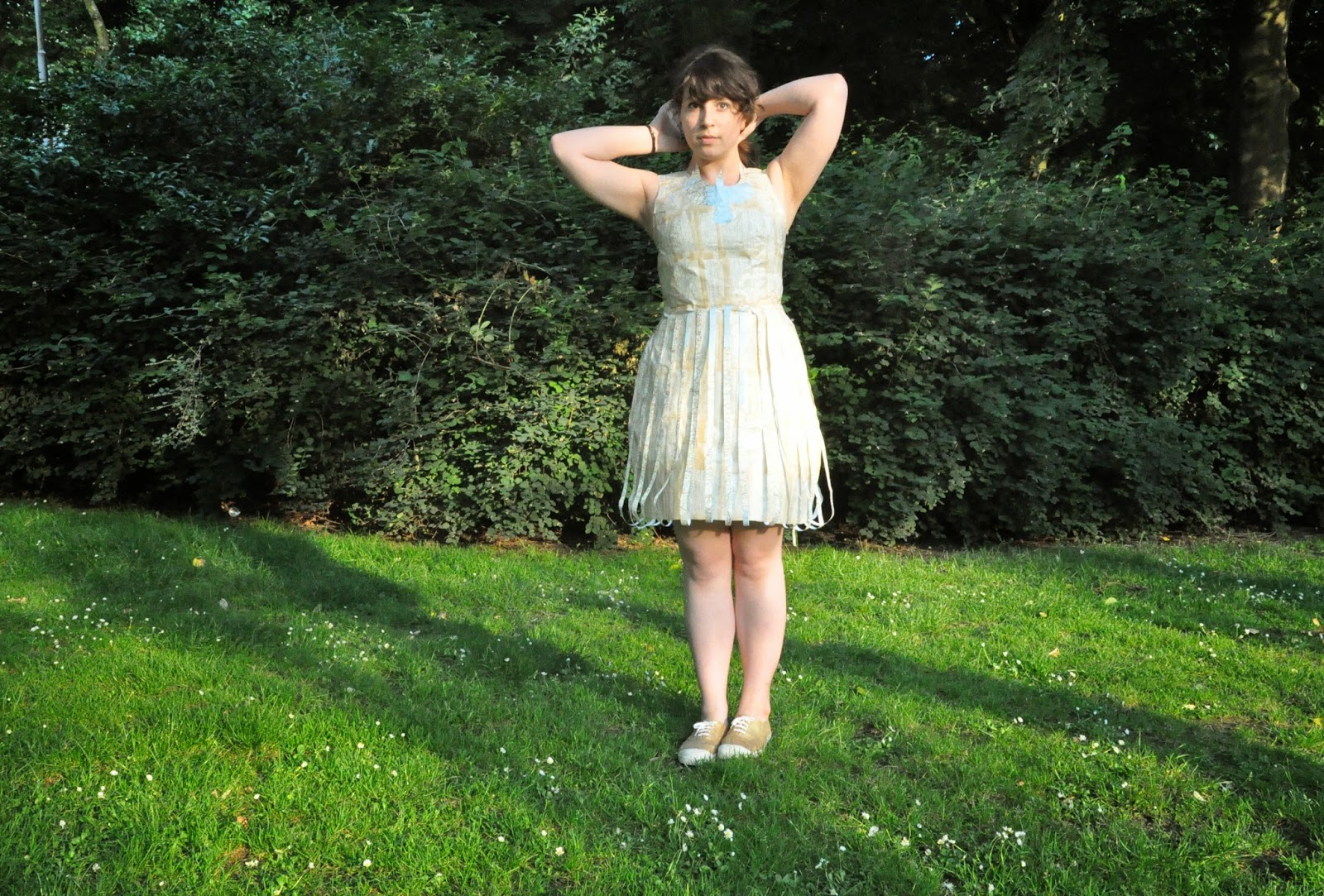 I started by glueing the paper to the skirt portion of the dress, and then added long strips of roadmap to the waistline. I did this to give some movement and lightness to something that was quickly becoming very rigid, and it turned out lovely! There is a nice movement there. 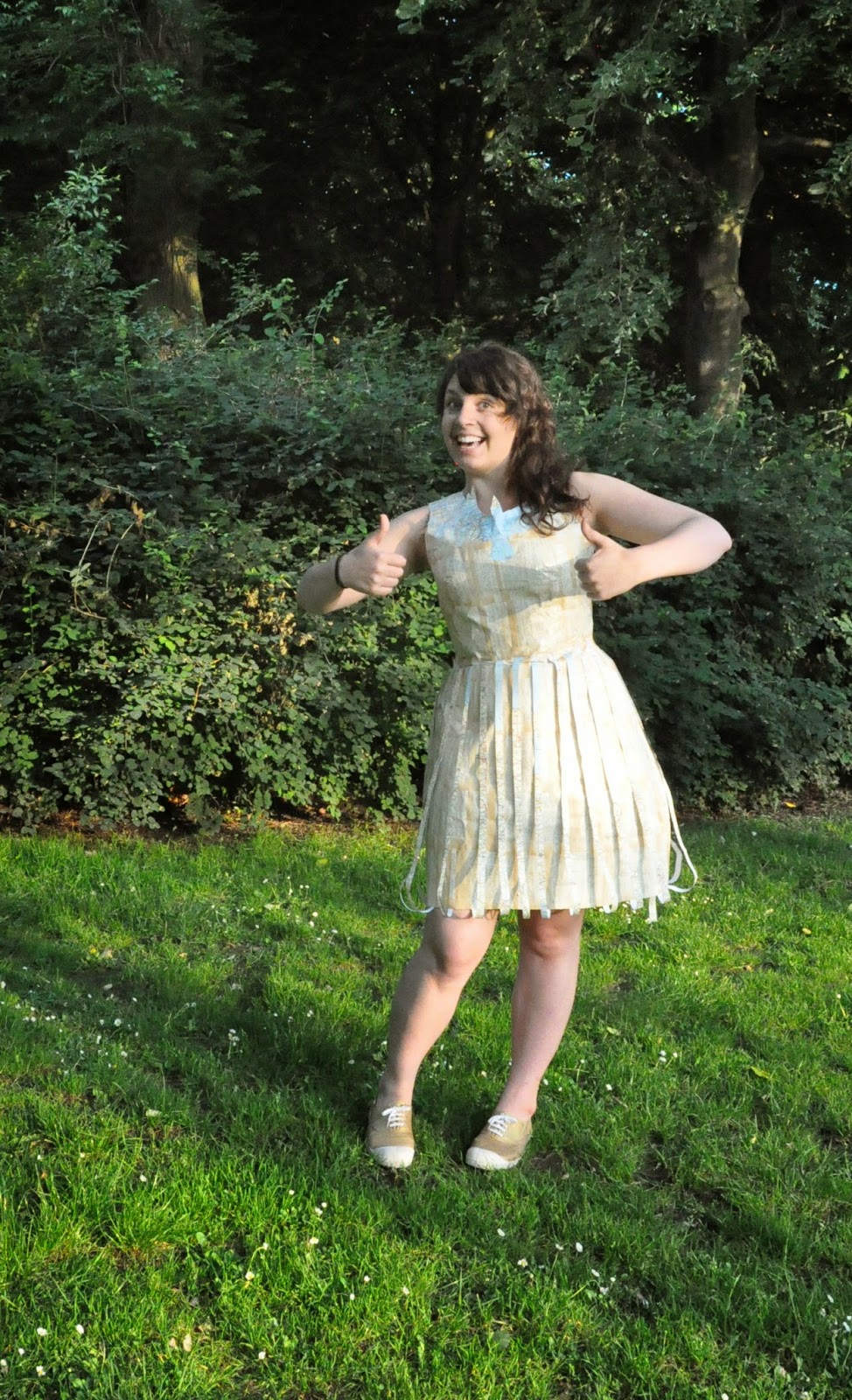 After this I added the paper to the bodice, carefully shaping it around the darts and curves. It already had loads of shape before I put it on, and after wearing it for a while it looks like it's on a mannequin. I'm thinking of making it into a giant lampshade or something, or a ghost dress. 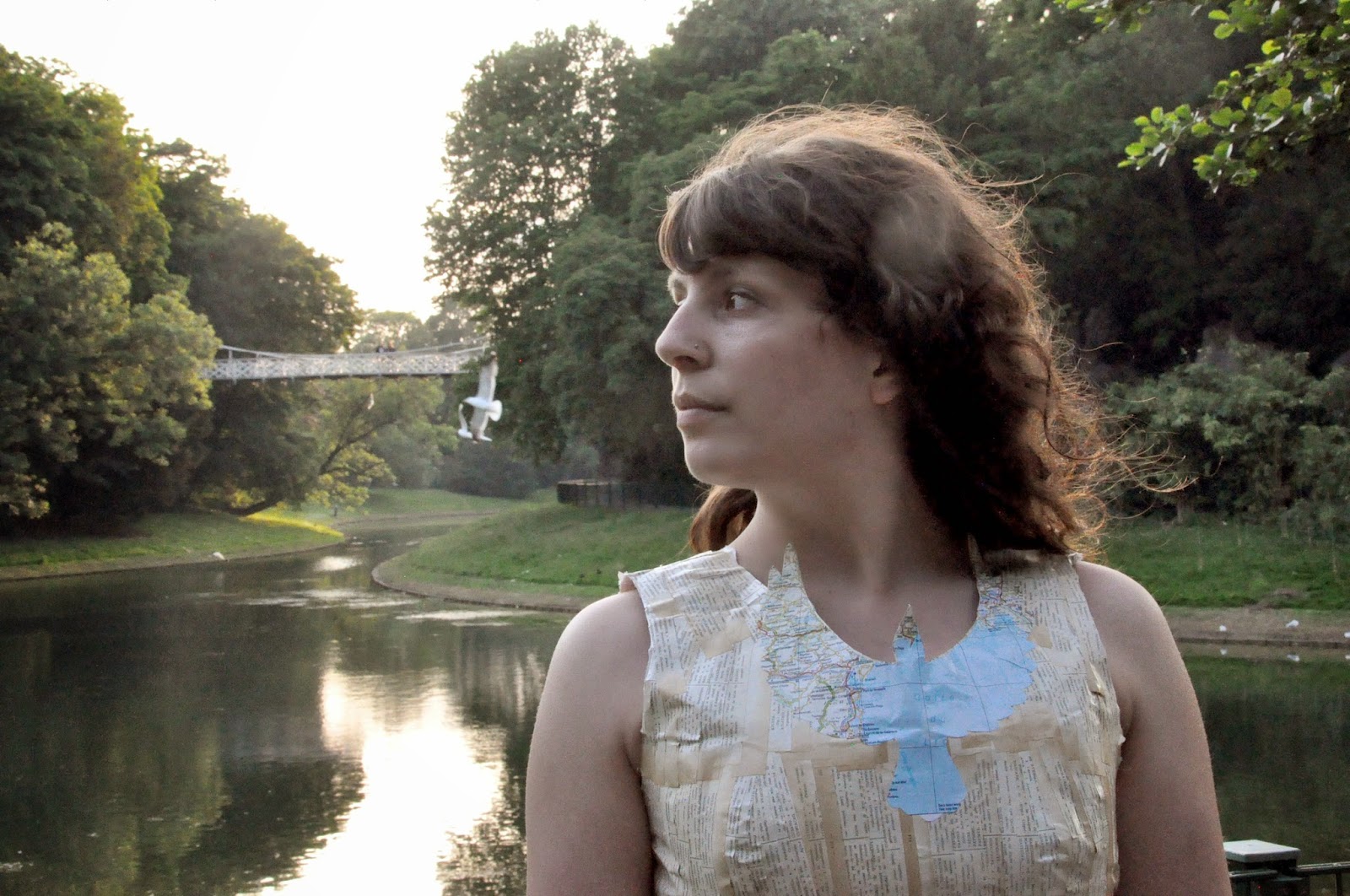 While I was designing this dress I came up with the skirt detail first, and realised it vaguely looked like a birdcage. I also wanted to add some interest to the neckline so I cut a bird out of a remaining piece of map, glued it on and cut away the neckline around it after it dried. It's a lovely detail and I'll probably use this in a 'real' dress some day! 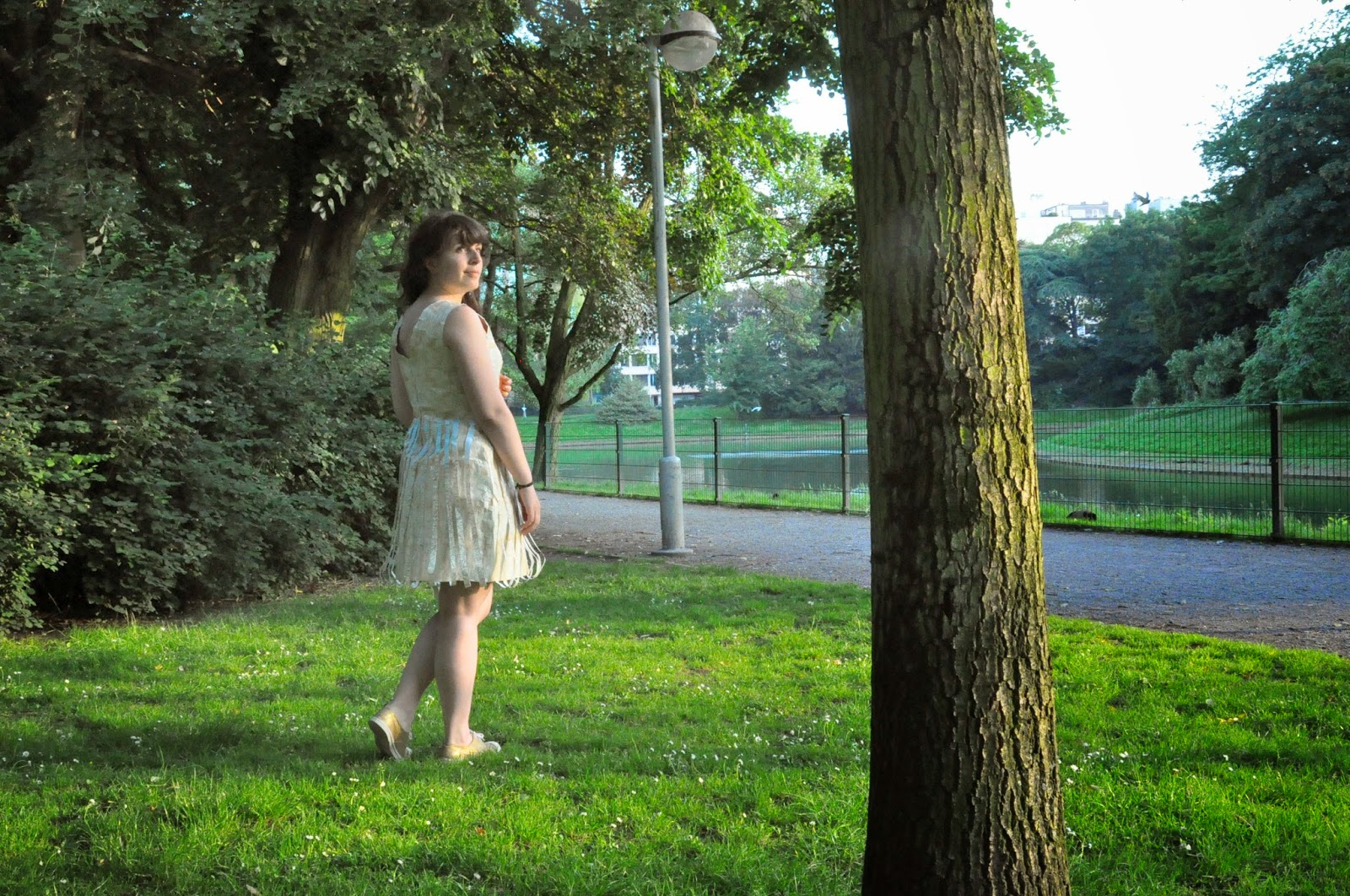 I had so much fun doing this, seriously. I'm not sure what I'll do with this now it's finished, but it was a great way to think out of the box and work around some of the problems I encountered. It also turned out to be one of the cheapest challenge, since the paper was all thrifted and the fabric came from my stash. All I bought was a zipper!

So again, if you liked this, please consider voting for me here. I'd love to make it to the final round, if not just because I'm so excited about the final challenge!
Gepost door Anneke op 12:06